Names of farmers who laid their lives during protest have been engraved on memorial to pay befitting tribute: Cabinet Minister Vijay Inder Singla 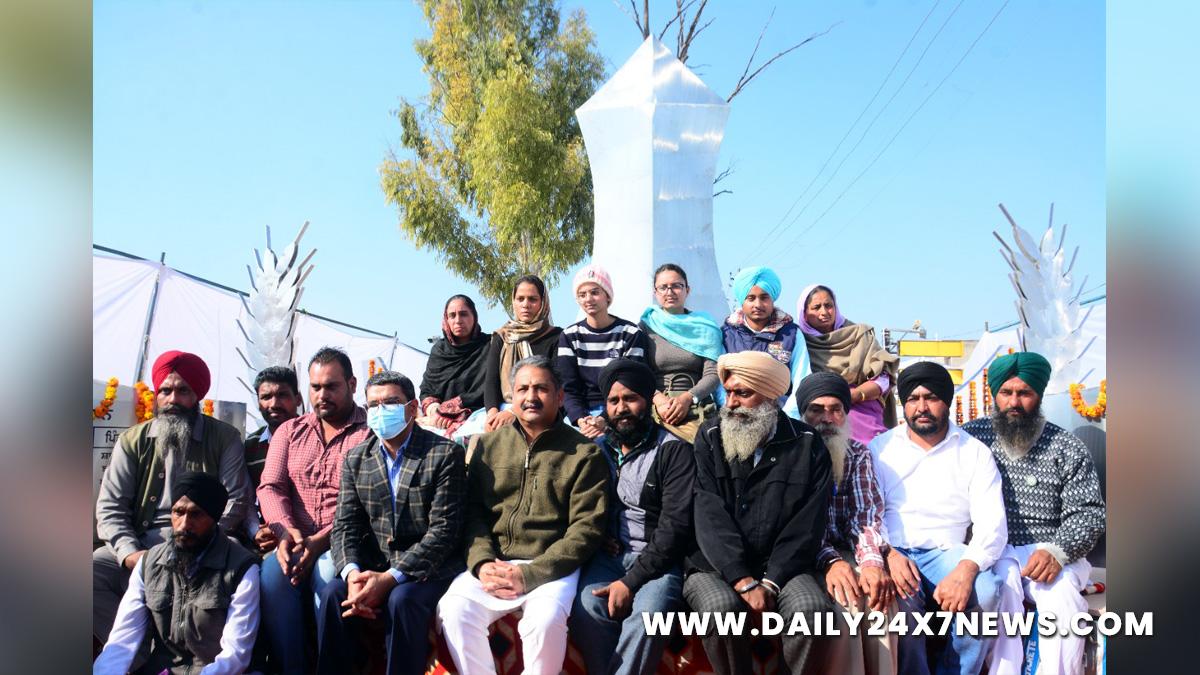 Sangrur : Punjab PWD Minister Vijay Inder Singla inaugurated the Kisan Memorial ‘Yadgar-e-Shaheedaan’ on Wednesday in Sangrur. This memorial has the names engraved on stone of all the farmers and labours who sacrificed their lives during year-long protest in national capital against three ‘black’ agriculture laws.The minister said that the ninth Sikh Guru has sacrificed his life for the sake of humanity and following the preachings of Sikh Gurus, the farmers have also laid down their lives against the anti-farmer policies of Modi government which has also created history.“Every section of Punjab has contributed in this farmers’ protest irrespective of their caste, religion or profession. We in Punjab have a history of celebrating martyrdom. This memorial is our tribute to those brave souls who sacrificed their lives for the noble cause,” Singla said while inaugurating the memorial on Wednesday.The PWD Minister asserted that he is proud of being a Punjabi, a community that played leading role in mobilizing the farmers and labours of India and forcing the union government to repeal three ‘black’ farm laws that otherwise would have had wrecked India’s agriculture sector had they got implemented.

“More than 700 people sacrificed their lives in this historical protest that persisted peacefully for one year despite all the efforts by union government to discredit the noble cause and farm unions,” Singla said.“I am a Punjabi first and then a Hindu. So it is my duty to make sure that the martyred farmers and labourers get justice. We will take care of their families also,” Singla said asserting the farmers’ protest is true example of Punjabiyat where people jointly contribute for noble cause rising above the lines of caste, sect and religion,” he said.Taking pot-shots at Rashtriya Swayamsewak Sangh (RSS), Singla asserted that communal politics of the saffron outfits has only deepened the divisions within the Indian society.“RSS has only ruptured the secular fabric of India’s pluralistic society. But I am sure that people of our Punjab are wise enough to understand their destructive politics and give them a befitting reply for incurring atrocities against Punjab and Punjabi community,” the PWD Minister said.The minister also felicitated the families of the martyred farmers and labours belonging to Sangrur district while inaugurating the memorial. He also assured them that the Punjab government has always stood by them and will extend every possible assistance in future also.On this occasion, DC Sangrur Mr. Ramvir, SSP Mr. Swapan Sharma among several other dignitaries were also present.