DSPs To Cover At Least 10 Villages Daily Under Drive 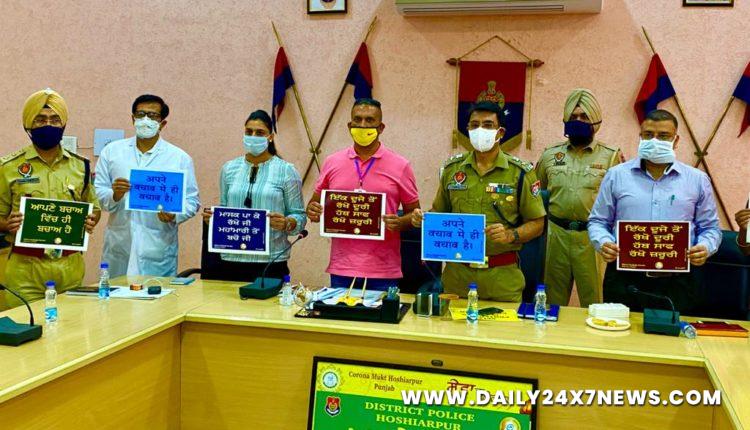 Hoshiarpur : In order to make ‘Hoshiarpur-Corona Free’, the District Police in collaboration with ‘Sewa Sankalap Society’ on Tuesday launched a special awareness drive ‘self safety slogan’ to sensitise people against Corona virus besides urging the public to wear masks properly and maintain social distancing strictly.Launching the drive here at Police Lines, the SSP Navjot Singh Mahal said that the purpose of the awareness drive was not only to aware the masses but also to contain the further spread of COVID-19 pandemic. The SSP said that all the Deputy Superintendents of Police (DSPs) had been mandated with a task to cover at least 10 villages every day under this drive so that maximum populace of the district could be covered. He said that Station House Officers (SHO) had also been directed to apprise the people about the preventive measures against COVID-19.Extending an appeal to the public, Mahal pointed out that corona virus could only be contained with the wholehearted support and cooperation of public, which was need of the hour. He said that people should wear masks properly and maintain social distancing strictly which could further lead to keep the spread of corona at bay. He said that early awareness and early detection could lead in containing the spread of virus, which was possible by meticulous following the health and safety protocols.
He mentioned that the health safety protocols should be adopted in our daily life/routines without any fail in larger public interest. The SSP said that when someone was travelling outside home, he/she should wear masks and abide by the health protocols besides washing hands in these trying circumstances.Meanwhile, the Vice President of Sewa Sankalap Society Advocate Harpreet Sandhu, who got unveiled the Self Safety Slogan drive at Ludhiana too, said that Hoshiarpur was the first district of Doaba region where this endeavour had been initiated. He said the drive was running in association with the medical experts of the Dayanand Medical College, Ludhiana to disseminate awareness amongst masses. Sandhu also urged the police officers/officials to adopt and circulate Safety Online Slogans to fight Corona while sitting at their respective homes to realise the ‘Mission Fateh’ launched by the CM Captain Amarinder Singh.On the occasion, Advocate Sandhu also handed over 1000 masks to the District Police for distribution.Sharing his views during the launch of drive, Professor of Surgery from DMC Dr. Ashish Ahuja apprised that how to adopt simple safety measures in battle against COVID besides keeping the further spread of contagion under check.Prominent amongst others who spoke on the occasion included SDM Amit Mahajan and SP Manjit Kaur.
Don’t Want To Issue Challans But People Should Honour Health Safety Proticols-SSP Mahal
Exhorting the people not to disobey Government and Health Department guidelines regarding health safety protocols, the SSP Navjot Singh Mahal said that the police didn’t want to issue challans just for the sake of collecting revenue but people should adhere to the guidelines in larger public interest. He said that while implementing the health safety measures, the District police issues challans to the tune of over Rs One crore to the violators who didn’t wear masks even on roads and public places, which would not be tolerated.

A delegation of HP Janjatiya Morcha call on Chief Minister

Punjab has no surplus water to share with other states : Sadhu Singh Dharamsot

Challan In Hoshiarpur Rape-Murder Case To Be Filed This Week : Captain Amarinder…