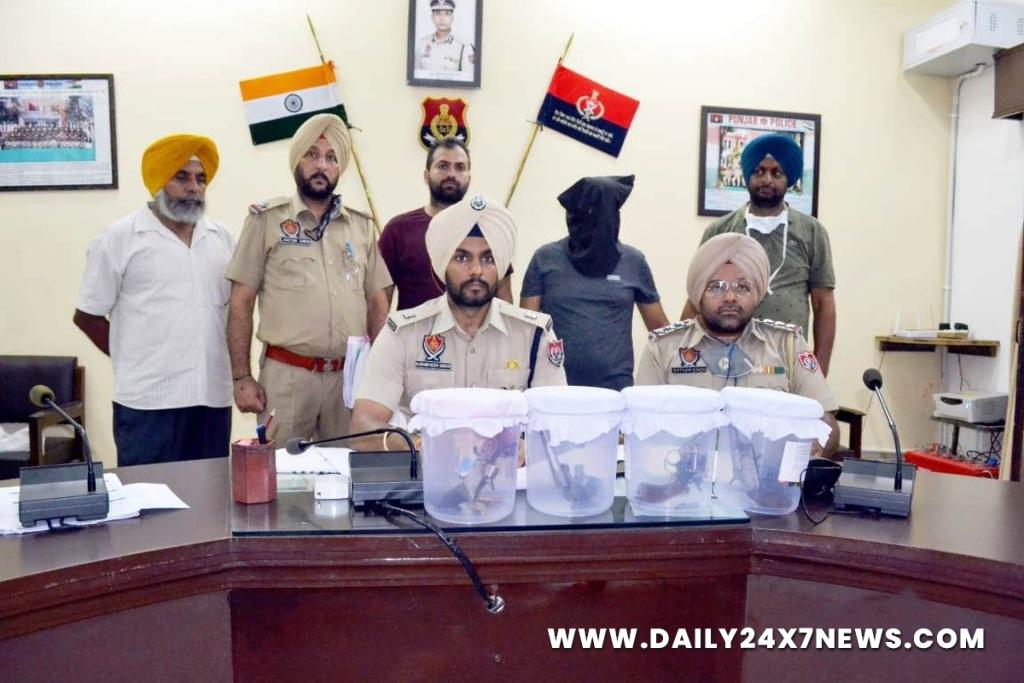 Sangrur : Acting swiftly on a tip-off, the Sangrur Police on Tuesday morning nabbed a dreaded gangster Jaspreet Babbi seizing four weapons, ammunition and a stolen car from his possession after a 15 Kilometre long hunt in Sunam area.Citing preliminary investigations, the district Senior Superintendent of Police Swapan Sharma said that Babbi was in touch with members of Ajaib Khan gang presently lodged in Sangrur Jail with whom he had hatched a conspiracy to eliminate rival gangsters Mani Sheron and Feteh Nagri. While Sheron is booked for heinous crimes across Punjab & Haryana, Nagri too is facing around 25 criminal cases.

Divulging more about the operation, the SSP said a secret information about the gangster’s presence was received following which a team of CIA Sangrur laid a trap and chased him around 12-15 kilometers in Sunam area earlier this morning. Babbi was travelling alone in a stolen Hyundai Verna car and though the gangster initially resisted but we arrested him without any exchange of fire.Babbi (32), an undergraduate from Sheron village of Sangrur was active in criminal activities for last 11 years and was wanted in 17 criminal cases of extortion, murder, loot and theft registered against him in different police stations of Sangrur, Bathinda and Patiala. His interrogation has also revealed that he had met Khan when the latter was out on parole for few days, the SSP said adding that further investigation is on to unravel the full scale of conspiracy.