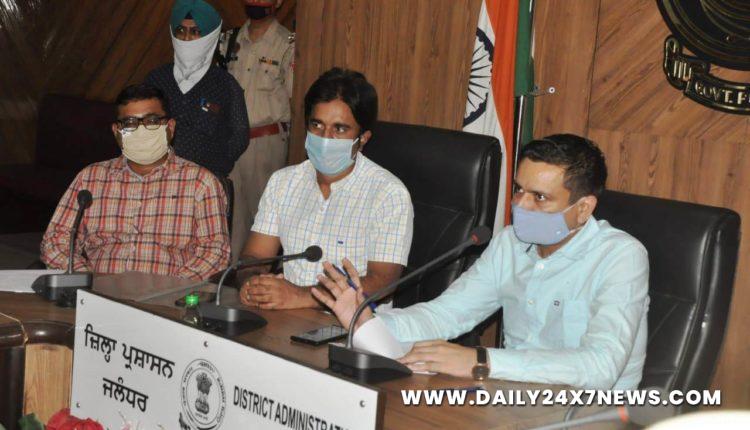 Jalandhar :  Deputy Commissioner Jalandhar Ghanshyam Thori today asked the education and police department to arrange for imparting online traffic education to students amid the covid-19 pandemic.Chairing a meeting of the District Road Safety Committee here at the district administrative complex, the deputy commissioner said that to sensitize children and the parents against underage driving a special campaign to be launched through online teaching mode until classes resumed in the schools. He further directed the officials to launch an awareness and enforcement drive to curb underage driving and promoting road safety in the city. Responding to an issue raised by one of the committee members, Thori asked the police department to initiate action against the illegal sale of fire-crackers in the congested markets to ensure foolproof safety in these localities.Pointing out at overloaded vehicles, Thori asked the Police and Transport department to launch a comprehensive drive for reigning in the errant overloaded vehicles in the city. Meanwhile, the officials of traffic Police informed the committee members that as many as 50 challans for overloading have been issued to the offenders in the last two months besides impounding many vehicles. The officials further mentioned that the drive against the overloaded vehicles would be further intensified. Members of the committee flag various issues concerning traffic congestion and road safety in the city adding they emphasized the need for the zebra crossing on all main intersections for the pedestrians. The officials of Municipal Corporation Jalandhar further mentioned that works of construction of new roads at cost of worth Rs. 28 Crore were under process in the city and would be completed in a stipulated time-frame.A variety of issues were discussed in the meeting ranging from implementation of Safe Scheme Vahan policy, action against drunk driving, removing of illegal encroachments to ensure smooth traffic flow on the roads, repairing of roads, awareness drive on safe driving, training of police personals, availability of the equipment, and to ambulance accessibility at the civil hospital.Prominent amongst others present in the meeting included Additional Deputy Commissioner Jasbir Singh, Regional Transport Authority (RTA) Barjinder Singh, SDMs Rahul Sindhu, Gautam Jain, Dr. Vineet Kumar, Dr. Sanjiv Sharma, Joint Commissioner Municipal Corporation Shayri Malhotra, and others.