In a bid to send strong message about the ill-effects of drugs, the Punjab Police, on the occasion of International Day against Drug Abuse and Illicit Trafficking on Saturday, organised various awareness activities to sensitise the people in all the districts across the state.Director General of Police (DGP) Punjab Dinkar Gupta said that, as part of the ongoing war 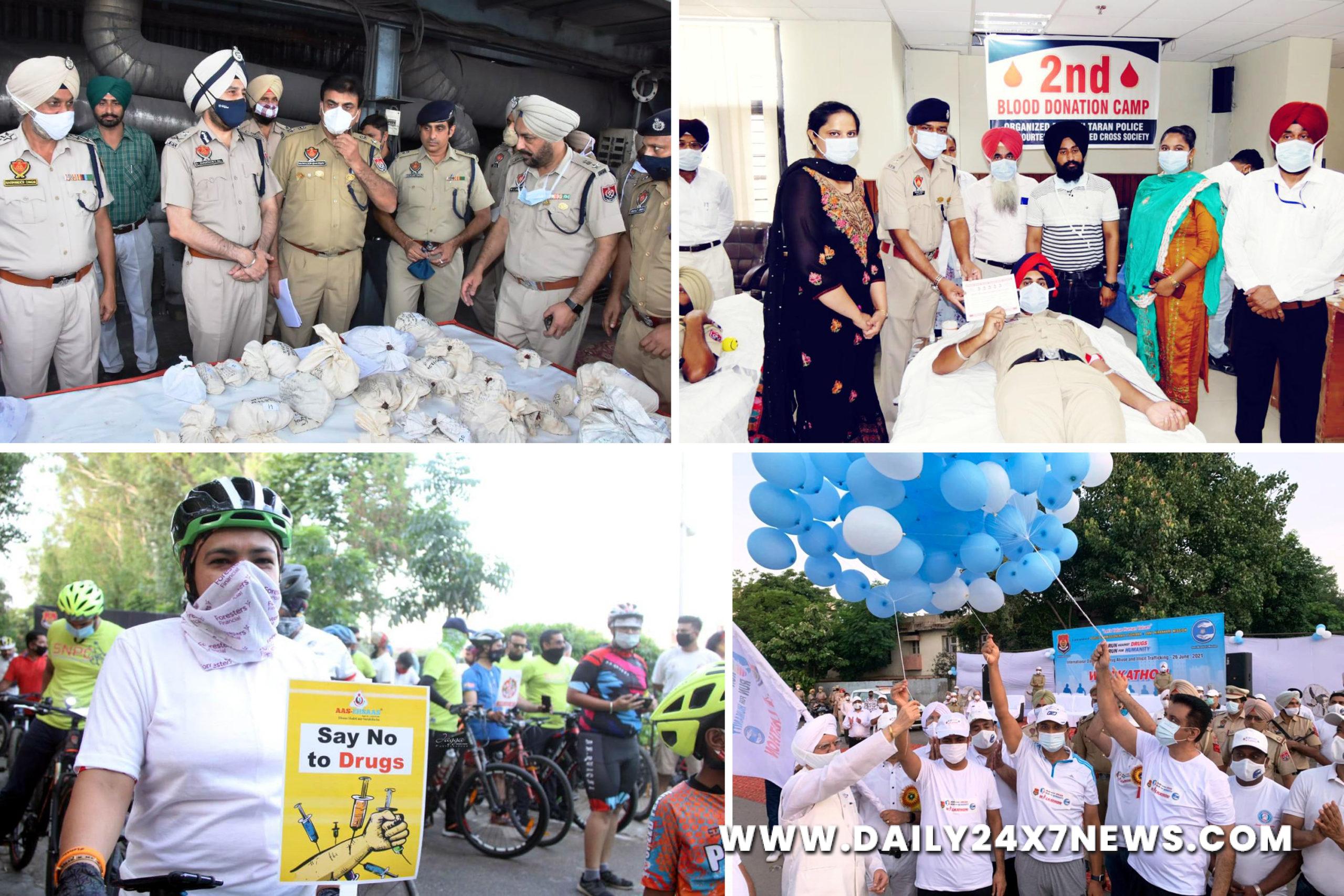 Chandigarh : In a bid to send strong message about the ill-effects of drugs, the Punjab Police, on the occasion of International Day against Drug Abuse and Illicit Trafficking on Saturday, organised various awareness activities to sensitise the people in all the districts across the state.Director General of Police (DGP) Punjab Dinkar Gupta said that, as part of the ongoing war against drugs, where the state Police has achieved remarkable results on the enforcement front to break the supply chain of drugs, efforts were on at the same time to prevent the people, especially the youth of the State, from falling prey to the drug menace.He said that to mark the International Day against Drug Abuse and Illicit Trafficking, the Punjab Police had launched a week-long awareness drive in all the districts from June 19 to June 26, under which CPs/SSP have organised several awareness activities including Nukkad Nataks, Blood Donation Camps, Cycle Rallies, Marathons and Seminars etc in their respective districts to sensitise the people.The DGP also thanked the Chief Minister Punjab Captain Amarinder Singh for appreciating efforts of Punjab Police in fight against drugs and digitally launching destruction of seized drugs/narcotics at Amritsar.DGP Dinkar Gupta, while giving message of “Say No to Drugs”, appealed to the people to stay from any kind of drugs as addiction to narcotics could cost them their life. He also exhorted the people of the State to help Punjab Police in its fight against drugs by sharing details on Punjab Police Helpline number ‘181’, if they found anyone smuggling or supplying drugs. He shared that Punjab Police, including the STF, had recovered over 2100 kgs of heroin alone during the last 4 years. He added that an analysis of the national level figures relating to number of cases registered under the NDPS Act and arrests of NDPS offenders, Punjab state alone accounted for over 17% of the NDPS cases registered and NDPS offenders arrested across India.

Divulging details of various activities in organised in the districts, Official Spokesperson of Punjab Police Department said that an anti-Drug Rally and a mini Marathon was organised in Fatehgarh Sahib in which a large number of Police Personnel and local youth participated to show their solidarity in their war against drugs. The Ludhiana Commisionerate Police adopted a multi-pronged approach against drugs by organising awareness programs, seminars, webinars, Cycle Rallies, Nukkad Nataks against drugs and raids were also conducted against the drug accused, POs, Parole Jumpers and Bail jumpers.A Roadshow was organised by Police Commissione Amritsar, a Cycle Rally and Cricket Match was held in Rupnagar Police, Nukkad Nataks were held in Pathankot, while Mini Marathon and Blood Donation camp was organised in Batala.Similarly, Road Shows and Public Awareness meetings were organised in Amritsar Rural, Nukkad Natak and Blood Donation camp was organised in Tarn Taran and Cycle Rally and Marathon was organised in Hoshiarpur, besides Bicycle Rallies and Awareness seminars were also organised in various districts, including Jalandhar Commisionerate, Shri Muktsar Sahib, Mansa, Jalandhar Rural, Moga, Patiala, Sangrur, SBS Nagar, SAS Nagar and Barnala.The Kapurthala police achieved a major success with the arrest of  two most wanted Proclaimed Offender Drug smugglers, who were wanted by the Special Task Force.Meanwhile, under a week-long drive, CPs/SSPs of all the districts also carried out a Cordon and Search Operations and arrested many drug smugglers and also recovered a  large quantity of drugs from their possession.

YFC Calls To Wipe Out Drugs With Collective Efforts

Led By MP, MLAs, CP And DC Youths Vow To Wage A War Against Druge Menance