Ruling Congress neither have jobs nor confidence for Punjab’s youth: Harpal Singh Cheema 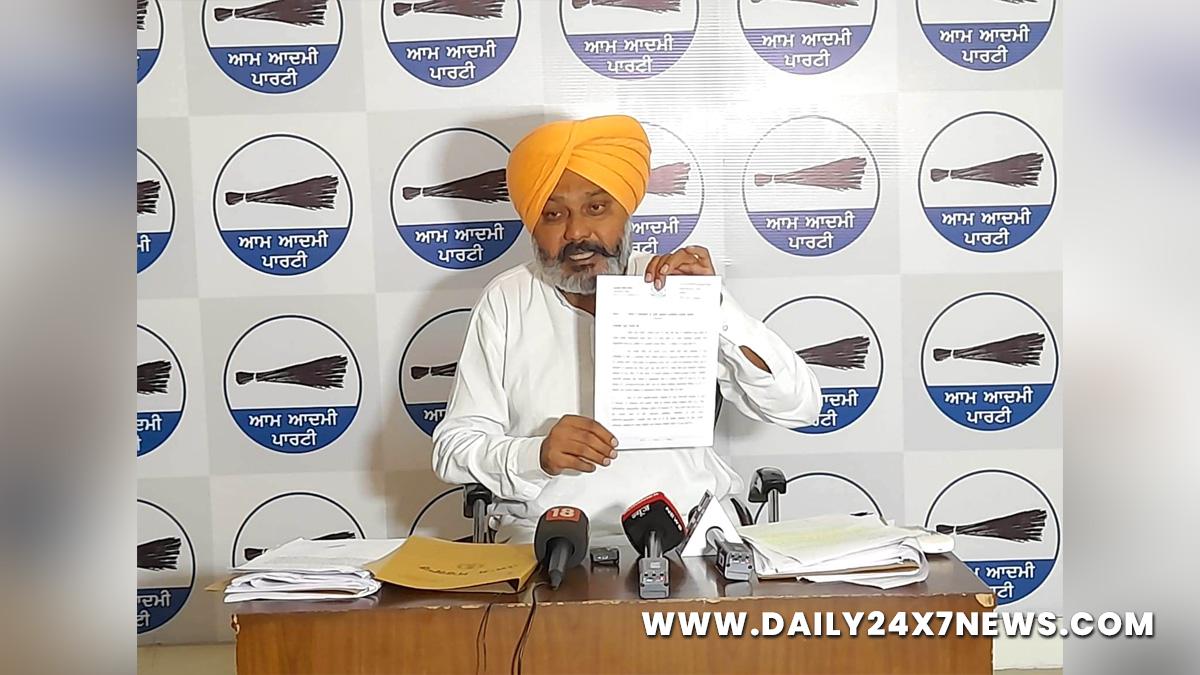 Chandigarh : The Aam Aadmi Party (AAP) Punjab senior leader and Leader of Opposition Harpal Singh Cheema has written a letter to Chief Minister Charanjit Singh Channi raising the issue of Punjab’s unemployed who have been on the streets for many years and demanded that all the unemployed youth of the state be given jobs as the Congress came to power with the promise of ‘Ghar-Ghar Rozgar’. At the same time, the Aam Aadmi Party reminded the Channi government of the Congress election manifesto to provide an allowance of Rs 2,500 per month to the unemployed including arrears till date.Releasing the letter written to the Chief Minister for the media from the party headquarters here on Monday, Harpal Singh Cheema said that due to the anti-youth policies of the Congress and the SAD-BJP governments, today Punjab has surpassed the national unemployment rate of 4.8 per cent with 7.32 percent unemployment rate in the state; which is a matter of great concern.Cheema said that the most unfortunate aspect was that unlike the SAD-BJP government, the Congress government of the state did not provide employment to the youth nor did it trust its youth. An example of this is the setting up of Integrated Dignitaries Protection Unit under VVIP Security umbrella by the previous Badal government in 2013, in which so far around 650 officers and employees have been recruited in different ranks; all these officers, employees belong to far flung states outside Punjab and have worked in various security agencies, who don’t even know Punjabi well, he added.

But their recruitment has distorted the entire seniority list of Punjab Police and violated the rights of hundreds of eligible candidates in the state.Harpal Singh Cheema said that even the sporadic vacancies due to the election year were being filled by candidates from outside states. Another example of this is the inclusion of 50 to 71 percent external candidates in the final list of candidates recruited for PSTCL recently. He demanded that the Punjab government should ensure that all its categories of candidates should be allotted extra numbers of Punjab domicile to stop the candidates from outside states. Similarly, on the pattern of other states, the state government should fix at least 80 percent quota for Punjab’s youth in private jobs.Cheema advocated for government recruitment to be done through PPSC and PSSS Board and demanded immediate ban on private company Tata Consultancy Services (TCS) Company. He said that the work of TCS was not transparent. The physical trial of police recruitment should also be conducted by the nodal officer of Punjab Police instead of a private company.

He said that waiting list should be made mandatory in the final merit list of competitive examination for government recruitments and the vacancies during next year-six months should be filled as per this waiting list.The AAP leader further said that at the request of unemployed youth, all future recruitment examinations should be conducted offline and in the same shift on the same day. Cheema demanded that the age limit for candidates be waived and the age limit be removed. Similarly full fee of unemployed for recruitment examinations should be waived. He also said that the Congress should pay monthly allowance to the unemployed of the state along with the arrears of previous years as the Congress government had not paid the allowance to anyone as promised.Contrary to the claims of Chief Minister Channi, Harpal Singh Cheema while showing the documents of the Water Resources Department explained how the Channi government was extending the tenure of retired officers and employees. At the same time, Cheema demanded that the services of guest faculty teachers teaching in government colleges be confirmed on unconditional basis.