NHM employees will be regularised on formation of AAP government in Punjab : Harpal Singh Cheema

Government is not short of money, but there is lack of intention: Anmol Gagan Mann 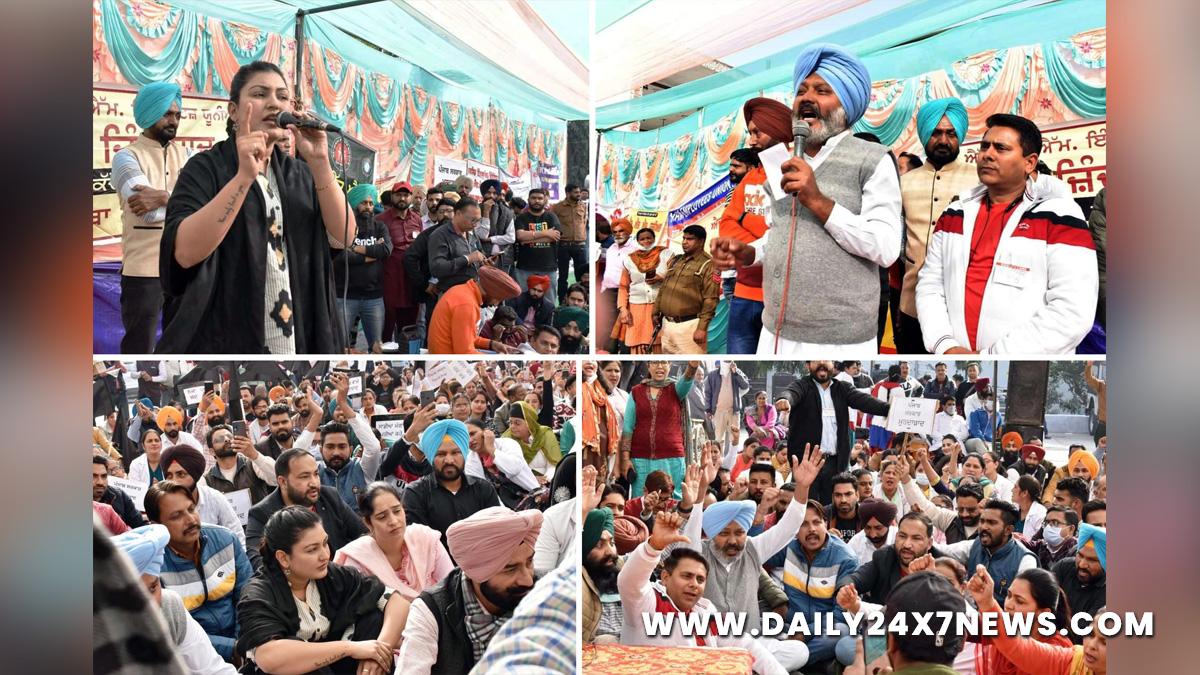 Kharar: Supporting the demands of the employees working under the National Health Mission (NHM), Punjab, the Aam Aadmi Party (AAP) senior leader and Leader of Opposition, Harpal Singh Cheema said that on the formation of the AAP government in Punjab ahead of the forthcoming Assembly elections; the NHM employees will be regularised. On Tuesday, Harpal Singh Cheema along with party’s Youth Wing co-president Anmol Gagan Mann visited the state-level dharna rally of the NHM employees in Kharar and met the protesters. Community health officers, doctors, nurses, clerical and other contractual staff under the NHM participated in the rally.Addressing the NHM employees on the occasion, Harpal Singh Cheema said that till 1987, the budget of Punjab was always surplus. He said that from 1987 to 1992, there was President’s rule in Punjab, in which the state got a debt of Rs 9,000 crores. At that time the central government, the Prime Minister Inder Kumar Gujral associated with Punjab, waived the loan of Rs 6,000 crores. Since 1992 till now only two parties, two families have ruled Punjab; the Badals-BJP and the Congress, said Cheema.

He alleged that both the parties during their rule looted the state a lot and today the total debt on Punjab has crossed 3 lakh crores. Taking a dig at the Badals and the Congress, Cheema said, “If these parties and leaders had made good management, given importance to the education and health sector, and had started a campaign against corruption; then the treasury would not have been empty. Today Punjab is one such state which has the highest debt. It is the fault of these governments; who ruled the state till now, that today the employees, staff, teachers, and youth have been forced to stage dharnas and protests.”Harpal Singh Cheema further said that today, the transport mafia, sand mafia, liquor mafia were running indiscriminately in Punjab, which is looting the state’s treasury. The treasury from which salary should have been received, the employees should have been regularised; these mafias have emptied that treasury, he added. Cheema said that about 12,000 employees under the NHM had been working in Punjab at low salaries for the past 12 to 15 years; who want their jobs to be regularised and increase in salaries. He alleged that jobs of experienced employees had not been regularised despite working with dedication and responsibility for a long time.

Taking a dig, Harpal Singh Cheema described Chief Minister Charanjit Singh Channi as ‘Ailaan Mantri’, stating that none of the announcements being made by the CM was implemented on ground. He said that Channi had claimed to resolve the issues of the employees within two days, but he just announced and did nothing. “Channi is a weak Chief Minister, who has no vision to save Punjab. He has no attention towards health nor education and these sectors are running only because of the dedication and hard work of these employees,” said Cheema.On the occasion, Anmol Gagan Mann said that if the government has intentions, then only they will listen to the problems and demands of the people. She said that the people kept giving opportunities again and again to the conventional parties but they did not stop looting the state and harassing the people. She further said that the youth were unemployed and ensnared in drugs. “The government is not short of money, but there is a lack of intention. What the AAP says, it also implements; as done in Delhi. We will not let you sit on dharnas. Everyone has been given a chance, now give a chance to the AAP for real change,” she added.

Sara Ali Khan is grateful Aanand L. Rai chose her to play Rinku in ‘Atrangi Re’