Channi government should give Rs 1 crore to each SC category employees who lost their lives while on duty and 5 marlas plots: Raghav Chadha 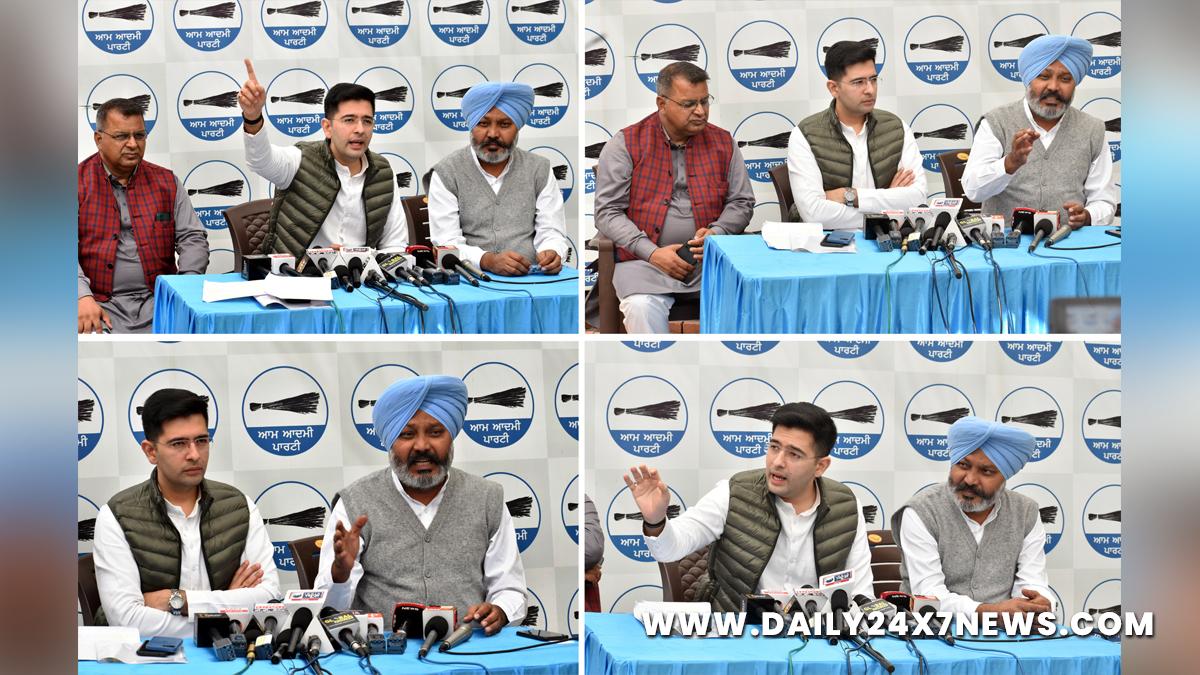 Chandigarh : The Aam Aadmi Party (AAP) Punjab co-in-charge and MLA from Delhi, Raghav Chadha has challenged Punjab Chief Minister Charanjit Singh Channi to provide Scheduled Caste (SC) families with 5-5 Marla plots and to immediately provide financial assistance of Rs 1 crore to each employees, who lost their lives while discharging duties during Covid Epidemic and duties, specially who belong to Schedule Castes. He said that if Chief Minister Channi did not do so; then after winning the 2022 elections by forming the Aam Aadmi Party government in Punjab, Arvind Kejriwal would give 5-5 Marla plots to SC families and all those who would be martyred during their jobs and will provide financial assistance of Rs 1 crore to the employees.Raghav Chadha was addressing a press conference at the party headquarters here on Tuesday along with party’s senior leader and Leader of Opposition Harpal Singh Cheema and spokesperson Neel Garg.

Raghav Chadha said, “Punjab Chief Minister Charanjit Singh Channi pretends to be sympathetic to the SCs as the Chief Minister has not even paid Rs 1 crore to each SC employee, he did not provide financial assistance nor did it provide 5-5 Marla plots to SC families, whereas the Congress party had promised plots in its manifesto for the 2017 elections.Raghav Chadha claimed that only the AAP supremo and Delhi Chief Minister Arvind Kejriwal are genuine sympathizers and well-wishers of the SC community as they were the ones who provided 1-1 crore to the SC category employees who sacrificed their lives while discharging duties during Corona Epidemic and other duties. Even the family of a female Safai Sewak who lost her life during the Corona epidemic was given assistance of Rs. 1 crore. In addition to this ‘Jai Bhim Yojana’ has been implemented to help SC children to get high level jobs, under which free preparation for IAS, IPS, IIT and other exams has been provided and a special amount for expenses has been given to the children. Similarly SC children are also helped to go abroad.

He said that the reforms introduced by Kejriwal in School Education in Delhi have benefited the SC class children the most. Raghav Chadha alleged, “Punjab Chief Minister Charanjit Singh Channi is using the SC category as vote, but doing nothing for the progress of this category. While the Aam Aadmi Party and Arvind Kejriwal with a dedicated spirit, are working for the progress and prosperity of the class. That is why it is said that ‘Baba Sahib tera supana adhura, Kejriwal karega pura’.On the occasion, Harpal Singh Cheema said that the Congress and Akali Dal Badal have used the SC category only as a vote bank. Sadhu Singh Dharamsot, a former Congress minister, had usurped crores of rupees of scholarship of SC children in Punjab. The Channi government is defending him instead of taking action against the accused minister. Cheema said that the training centers for SC students in Punjab for UPSC, PPSC and other competitions have been closed, they are not getting a pension of Rs 2,500 nor they are getting shagun of Rs 51,000. Therefore, with the formation of the Aam Aadmi Party government in Punjab, good plans for the progress and prosperity of SCs would be implemented, he added.

NHM employees will be regularised on formation of AAP government in Punjab : Harpal Singh Cheema