Aids and assistive devices have been provided to 20.01 lakh divyangjan at a cost of Rs. 1210.67 crore through 10428 camps during the last seven years 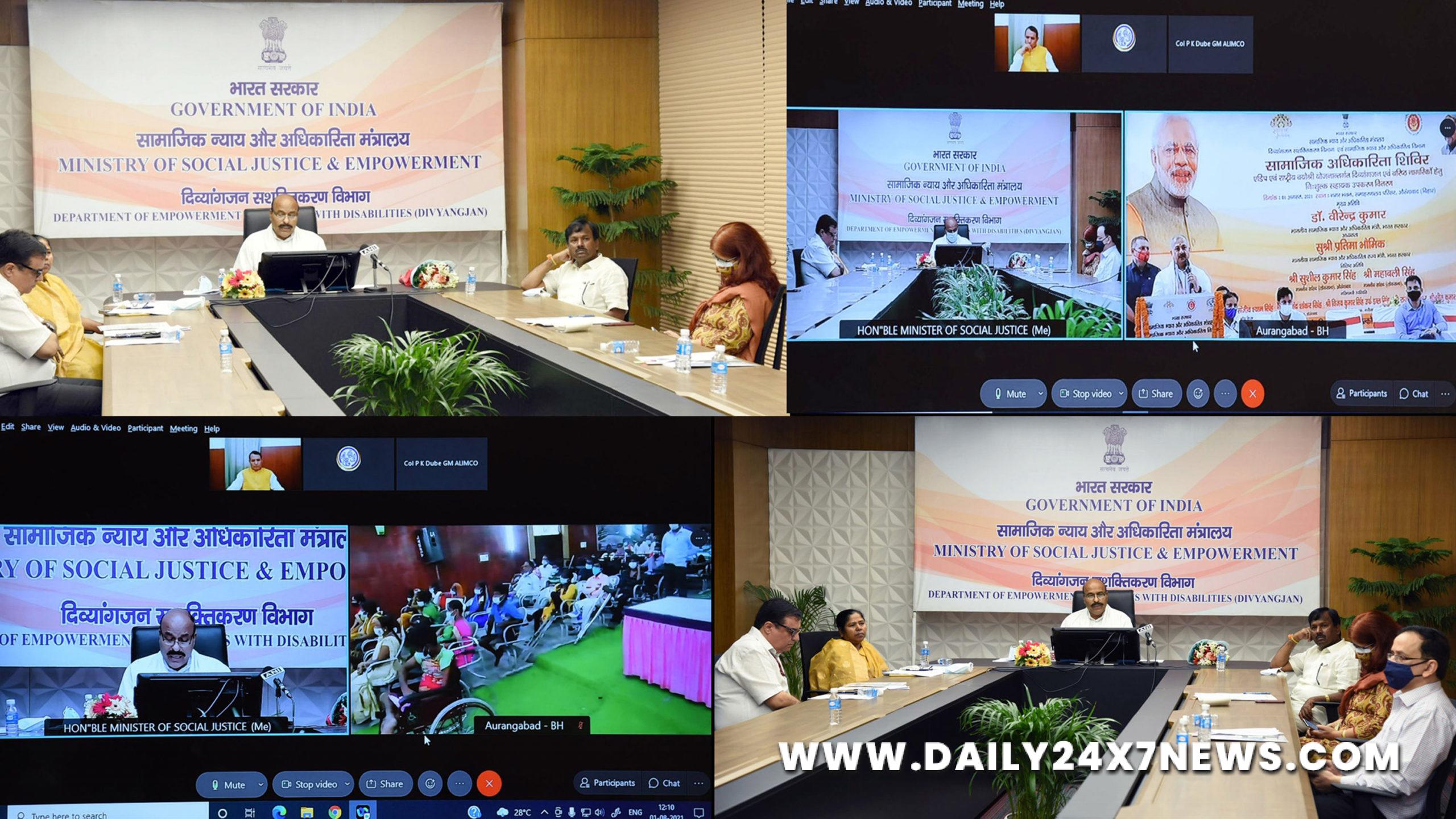 New Delhi : A ‘Samajik Adhikarita Shivir’ for distribution of aids and assistive devices to ‘Divyangjan’ under the ADIP Scheme and to Senior Citizens under the ‘Rashtriya Vayoshri Yojana’ of the Ministry of Social Justice and Empowerment, Government of India was organized by the Department of Empowerment of Persons with Disabilities (DEPwD in association with ALIMCO and District Administration Aurangabad (Bihar) at Town Hall in District Collectorate campus, Aurangabad.Chief Guest of the function Dr. Virendra Kumar, Union Minister for Social Justice and Empowerment, Govt. of India inaugurated the camp virtually from New Delhi along with Pratima Bhoumik, Union Minister of State for Social Justice and Empowerment, Govt. of India who presided over the function. Shri A. Narayanswamy, Union Minister of State for Social Justice and Empowerment, Govt. of India also graced the occasion virtually. Shri Sushil Kumar Singh, Member of Parliament, Aurangabad attended the function at main venue in Aurangabad whereas Shri Mahabali Singh, Member of Parliament, Karakat joined the function virtually in the presence of other dignitaries.A total of 5102 aids and assistive devices valued at Rs.2.43 crore will be distributed free of cost to 1521 Divyangjan and 546 Senior Citizens at Block/Panchayat levels by following the SOP prepared by the Department in view of COVID-19 Pandemic.Speaking on the occasion Union minister for Social Justice and Empowerment Dr. Virendra Kumar said today’s function has special importance, as organising such events the beneficiaries avail the benefit of government schemes in a transparent procedure but such event help in generating awareness among the masses. Informing about the work done in last seven years by Ministry, Union Minister said that scheme for Cochlear implantation which was started in 2014 has covered 3555 hearing impaired children across the nation out of which 50 successful cochlear implant surgeries have been conducted in the State of Bihar and seven Hospitals are empanelled for conducting such surgeries under the government scheme in Bihar.

Minister added that Rs. 22.83 crore of scholarship has been released among 5855 Divyangjan students in the State of Bihar. Central government has released Rs. 9.25 crores for making 21 government buildings in Bihar accessible and ‘Divyang’ friendly under Sugamya Bharat Abhiyan.For attaining training at par with latest in the world by the Divyangjan sports persons of the country the Government is setting up a Centre for Disability Sports at Gwalior, Madhya Pradesh at a cost of Rs.171.00 crore. In addition to above, Central has issued 59 Lakh of UDID cards out of which 1.39 Lakhs of Unique ID cards for divyangjan have been issued in the State of Bihar. He informed that a dynamic change has occurred in implementation of the Schemes during the last seven years under the leadership of Narendra Modi ji. Quoting ‘Modi Hai To Mumkin Hai ‘ he told that during the last seven years and the current year aids and assistive devices have been provide to 20.01 lakh divyangjan at a cost of Rs. 1210.67 crore through 10428 camps. 10 Guinness world record have been created during the distribution camps conducted by ministry under ADIP scheme.Addressing on the occasion Union Minister of State for Social Justice and Empowerment Sushri Pratima Bhumik emphasised on Skill training programme for empowerment of Divyangjan and brings them in the mainstream of society for overall development of the country. She said that their department is committed towards the Divyangjan and is always ready to extend any kind of support to meet the need required for welfare of Divyangjan and will fulfil the vision of Hon’ble Prime Minister towards empowerment of persons with disabilities under the guidance of Union Minster for Social Justice and Empowerment. In the honour of Senior Citizens she said that in our culture ‘Jo Jyesth Hai O Shresth Hai “ so we should respect them accordingly.Shri Mahabali Singh, Member of Parliament, Karatat addressed virtually and expressed his gratitude towards the Union Minister for the initiative taken by the government for empowerment of Divyangjan and senior citizens.Addressing on the occasion from the main venue at Town Hall, Shri Sushil Kumar Singh, Member of Parliament of Aurangabad said that today his efforts for providing benefit of Central Government scheme for welfare of marginalised section of the region, especially to persons with disabilities and senior citizens shown results because of commitment of Central Government.

Anjali Bhawra, Secretary, DEPwD, Ministry of Social Justice & Empowerment, Govt. of India informed about the details of the schemes being implemented by the department for Divyangjan. She said that Divyangjan are integral part of human resource and Central Government is committed to build a capable environment in every possible way for inclusive opportunity for Divyangjan to bring them in mainstream of society.Dr. Prabodh Seth, Joint Secretary, DEPwD, Ministry of Social Justice & Empowerment, Government of India addressed welcome note during the function.In view of COVID 19, identified beneficiaries will be provided their prescribed assistive devices subsequently at their nearest respective Blocks at their location in a series of follow-up distribution camps in Aurangabad, Districts.Different type of assistive devices which are to be distributed among identified Divyangjan and senior citizens beneficiaries registered during assessment camps at Block Level includes 1062 Tricycle, 385 Wheelchairs, 936 Crutches, 417 Walking Sticks, 43 Rollators, 07 Smart Phone, 40 Smart Cane, 8 Braille Kit, 06 C. P Chair, 16 MSIED Kit, 10 ADL Kit, 06 Cell phone, 873 Hearing Aid, 332 Artificial Limbs and Callipers , 505 tetrapod, 02 Walker, 62 Spectacles, 392 Dentures etc.The camps are conducted under the Scheme of Assistance to Disabled Persons (ADIP) for Purchase/Fitting of Aid/Appliances (ADIP) is one of the most popular scheme for providing assistive aids & appliance to Divyangjans and Rashtriya Vayoshri Yojana for providing daily living assistive devices for senior citizens and is organized by Artificial Limbs Manufacturing Corporation of India (ALIMCO), a Public Sector Undertaking under the Ministry of Social Justice and Empowerment has been identified as the implementing agency of the ADIP scheme in association with States/districts authorities. In view of COVID19 Pandemic, a Standard Operating Procedure (SOP) has been approved by the Government of India for ensuring assessment and distribution of aids and assistive devices while observing social distancing and sanitization protocols. Shri D R Sarin, CMD ALIMCO addressed the vote of thanks in the function virtually and Shri Saurav Suman, Collector, Aurangabad was also present at the main venue of the function in Aurangabad.