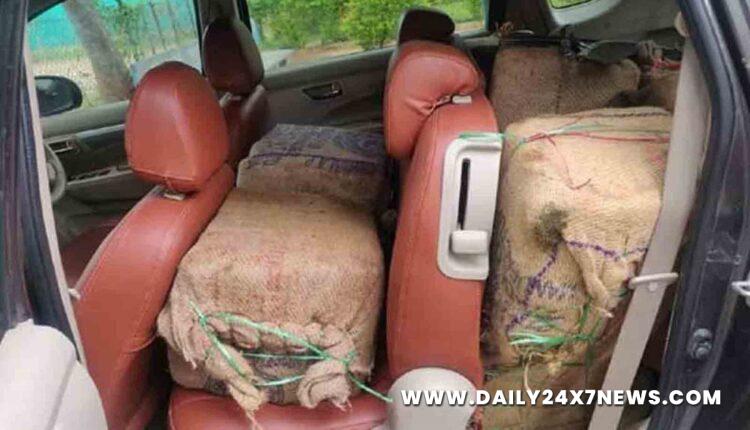 Bengaluru : Bengaluru police has arrested two persons and seized 141.250 kg marijuana valued at around Rs 84.60 lakh from them, the Koramangala police said here on Wednesday.According to the police, the arrested are Chaddakrishnan aka Santhosh, 22 years, resident of Visakhapatnam, Andhra Pradesh and Murthy aka Channaiah, 40 years, resident of Kollegal in Chamarajanagar district of Karnataka.Bengaluru South-East division’s Madiwala sub-division’s Assistant Commissioner of Police (ACP), Sudheer M. Hegde told reporters that the Koramangala police acted on a tip off. “Main accused Chaddakrishnan, a resident of Araku valley of Dumbriguda Mandal, procured large quantities of marijuana from gullible tribals living in the deep jungle there. He has ‘deep contacts’ in jungles of Andhra Pradesh. We need to interrogate him further to know about his contacts,” he explained.The ACP added that Chaddakrishnan had developed a well functioning network in Koramangala, K. R. Puram, H. S. R. Layout, K. R. Pet (City Market) and other adjacent areas as well, where he used to sell this large quantity of marijuana at a higher rate.Bengaluru South-East division Deputy Commissioner of Police. Srinath Mahadev Joshi said that Kollegal resident Channaiah is his accomplice in this crime who helped him in transporting this illegal substance from Andhra Pradesh to Karnataka. “We have seized a truck from him,” he said.The police has registered a case and is investigating.

Moderna Covid jab efficacy marginally drops to 90% in US trial