Money should be recovered by registering FIRs against corrupt ministers: AAP 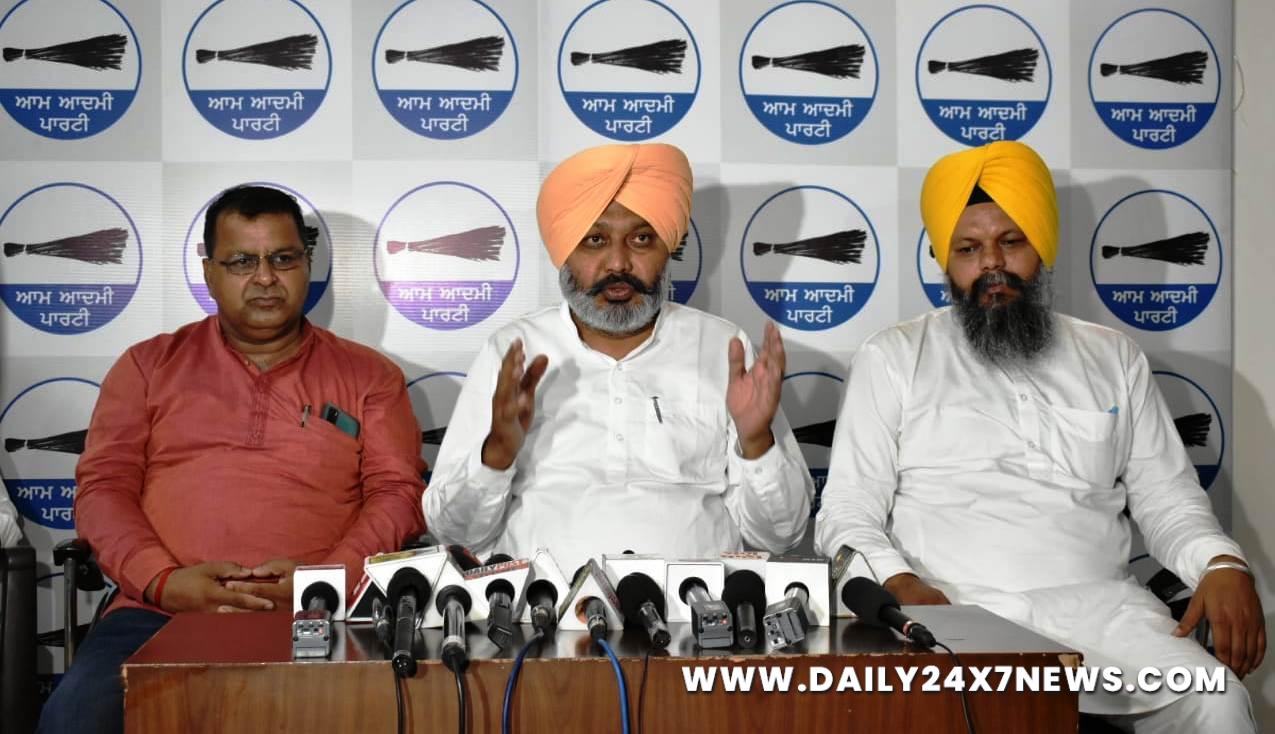 Chandigarh : The Aam Aadmi Party (AAP) Punjab senior leader and Leader of Opposition (LoP) Harpal Singh Cheema said, “If the current and former ministers accused of corruption are included in the new cabinet of the Punjab government, the AAP will wage a struggle from the streets to the Vidhan Sabha and protest at the Chief Minister’s residence.” Cheema demanded that cases (FIRs) be registered against the corrupt ministers of the Captain government with the money be accounted for and they be put behind bars.This demand was made by Harpal Singh Cheema while addressing a press conference held at the party headquarters here on Saturday. He was accompanied by party spokespersons Neel Garg and Manwinder Singh Giaspura. Cheema said the AAP had been demanding dismissal of corrupt ministers from the Punjab Cabinet for a long time. Due to this the newly elected Punjab Chief Minister Charanjit Singh Channi has shown the way out to Balbir Singh Sidhu, Sadhu Singh Dharamsot, Sunder Sham Arora and Rana Gurmit Singh Sodhi from his Cabinet. Cheema said he was satisfied that he had managed to fulfill his responsibility as the main opposition.

Cheema said, “The reshuffle in the cabinet confirmed all our allegations, but has it changed the decades-old corrupt character of the Congress or is it just a pre-poll drama?” He said the question and challenge is when the Chief Minister would register FIRs against these corrupt ministers. The LoP said even though in the last four-and-a-half-years of the Captain government, the people have seen that all these Congressmen have been part of the ‘Ali Baba’ gang.“Under Channi’s leadership, they will not become innocent; but will the Congress tell people the scale of why Bharat Bhushan Ashu, the kingpin of the mandi mafia was saved”, he added. Regarding the reinstatement of former minister Rana Gurjeet Singh in the cabinet, Harpal Singh Cheema asked, “Has Rana Gurjeet Singh now bathed in Ganga?”

Instead of getting suppressed, Channi should show courage in front of Sidhu and Gandhi family: Cheema

Advising Chief Minister Charanjit Singh Channi, Harpal Singh Cheema said he had come to the post of Chief Minister not because of the Gandhi family but because of the thinking of Baba Saheb Dr Bhim Rao Ambedkar and the Constitution. Therefore, Channi should move forward with courage instead of bowing down to the self-appointed Super CM Navjot Singh Sidhu and the Gandhi family.Cheema said, although he was politically a staunch opponent of the Congress, but when the Congress chose Charanjit Singh Channi, a poor Sikh from a downtrodden background, as its compelled Chief Minister; it was heartening to see that this section has got a large representation and respect will increase in the society. “But his reassurance was met by the Congress high command the next moment. The humiliation of the downtrodden society was evident to Channi as Navjot Singh Sidhu walked around holding hands or placing his hand on his shoulder. Now, as I watched Channi bowing down to High Command in Delhi, I was even more saddened that the Congress had not given Charanjit Singh Channi the real honor of being the Chief Minister; but had made him the Chief Minister till the elections; who cannot chose his cabinet but also the DGP, Chief Secretary, AG and other officials,” he said.