Announces upgradation of PHC Panchrukhi to CHC, opening of PHC at Gandar 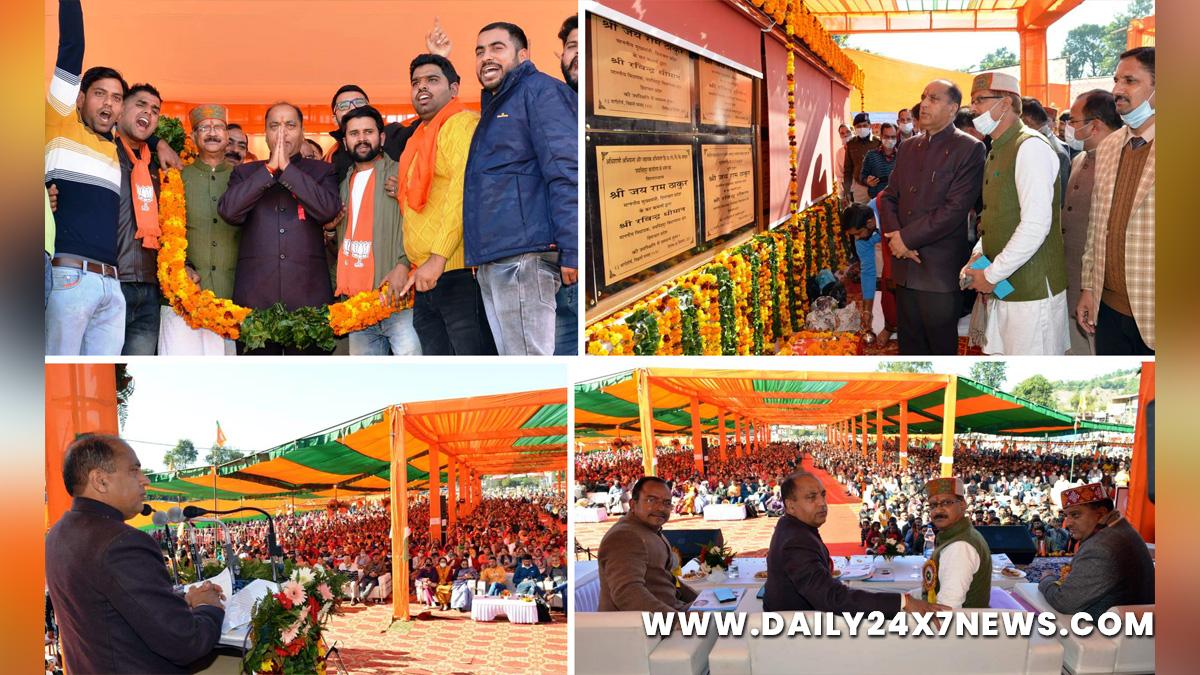 Shimla : Chief Minister Jai Ram Thakur after inaugurating and laying foundation stone of developmental projects worth Rs. 144 crore in Jaisinghpur Vidhan Sabha area of Kangra district, while addressing a massive public meeting at Chawgan Ground Jaisinghpur, announced Division of Jal Shakti Department and BMO Office at Jaisinghpur. He announced upgradation of PHC Panchrukhi to CHC, opening of PHC at Gandar, opening of veterinary dispensary at Gram Panchayat Lahadu, starting of science classes in Senior Secondary School Tatehal Commerce classes at Senior Secondary School at Andretta, construction of four additional rooms in PWD Rest House at Jaisinghpur, and starting of two new trades in Government Polytechnic Talwar. He said that HRTC Depot would be opened soon at Jaisinghpur in place of Sub Depot. Chief Minister said that Jal Jeevan Mission started by the Prime Minister Narendra Modi has ensured that every household in the State get tapped drinking water. He said that due to the commitment and concerted efforts of the State Government, Himachal Pradesh has emerged as a first State in effective implementation of this scheme. He said that not even a single bridge was constructed in the constituency during the tenure of previous Congress Government, whereas six bridges have been constructed during the last four years in the constituency.Jai Ram Thakur said the State Government has opened a PWD Division at Jaisinghpur to ensure proper maintenance and construction of roads and bridges in the area. He said that although the pandemic adversely affected the economy of the country and the State, but Himachal Government ensured that pace of development goes uninterrupted. He said that the people of the country were fortunate that during this testing time the country was led by the able leadership of Prime Minister Narendra Modi. He said that even the leading independent agencies in their survey has adjudged Prime Minister as most popular leaders of the world.

Chief Minister accused the Congress leaders of politicizing the sensitive issue of Covid pandemic. He said that at the peak of the pandemic, the Congress leaders did nothing except misleading the people of the State. He said the State Congress leaders even did not spare their own central leaders and raised bill worth Rs. 12 crore, as expenditure during the pandemic. He said that there were only 50 ventilators in the State and the present State Government took up the matter with the Prime Minister and 500 ventilators were immediately provided to the State and today the State has over thousand functional ventilators. Similarly, there were only two oxygen plants in the State and today the State has 30 oxygen plants in various parts of the State, he added.Jai Ram Thakur also thanked the doctors, health workers and other frontline workers for making Himachal first State in the country with cent percent vaccination of eligible age group. He said that it was due to the strong leadership provided by the Prime Minister that indigenous vaccine was developed in the country. He said that the Congress leaders even politicized this issue and termed this vaccine as a vaccine of BJP. He said that the biggest vaccination campaign of the world was carried out in the country and Himachal also pioneered in this campaign.Chief Minister said that the opposition leaders were befooling the people on name of Old Pension Scheme and New Pension Scheme issue. He alleged that the Congress Government led by late Virbhadra Singh in the year 2003 abolished the Old Pension Scheme and New Pension Scheme was implemented. He said that similarly, the Congress Government changes the R&P Rules of Police in the year 2015 and Police personnel were deprived of few benefits. He said that the State Government was well aware of the situation and would do whatever possible for their welfare.Jai Ram Thakur inaugurated Rs. 73.32 lakh lift water supply scheme Sugri-da-bagh, Rs. 11.22 crore 175 meter long double lane bridge over Mand road under CRF, Rs. 5.80 crore bridges over Mol Khud and Kotlu nallah on Bandhau-Barghatta road under NABARD, Rs. 3.75 crore 50 bedded Girls Hostel at Polytechnic College Talwar, Rs. 3.39 crore science block of Government College Jaisinghpur, Rs. 2.37 crore bridge on link road to village Dandel Gangui on Sukad khud under NABARD and Rs. 1.56 crore 62 meter long foot bridge on Dallu Chattar via college road under Scheduled Caste Development Plan.

Raghav Chadha alleges… Channi government will make a weak case to arrest Majithia, will get him released from court the very next day : Raghav Chadha