Chief Minister Jai Ram Thakur dedicated and laid foundation stones of as many as 21 developmental projects of HP Public Works Department and Jal Shakti Vibhag at a collective cost of Rs. 161.58 crores in Jawali constituency of Kangra district today. He announced the upgradation 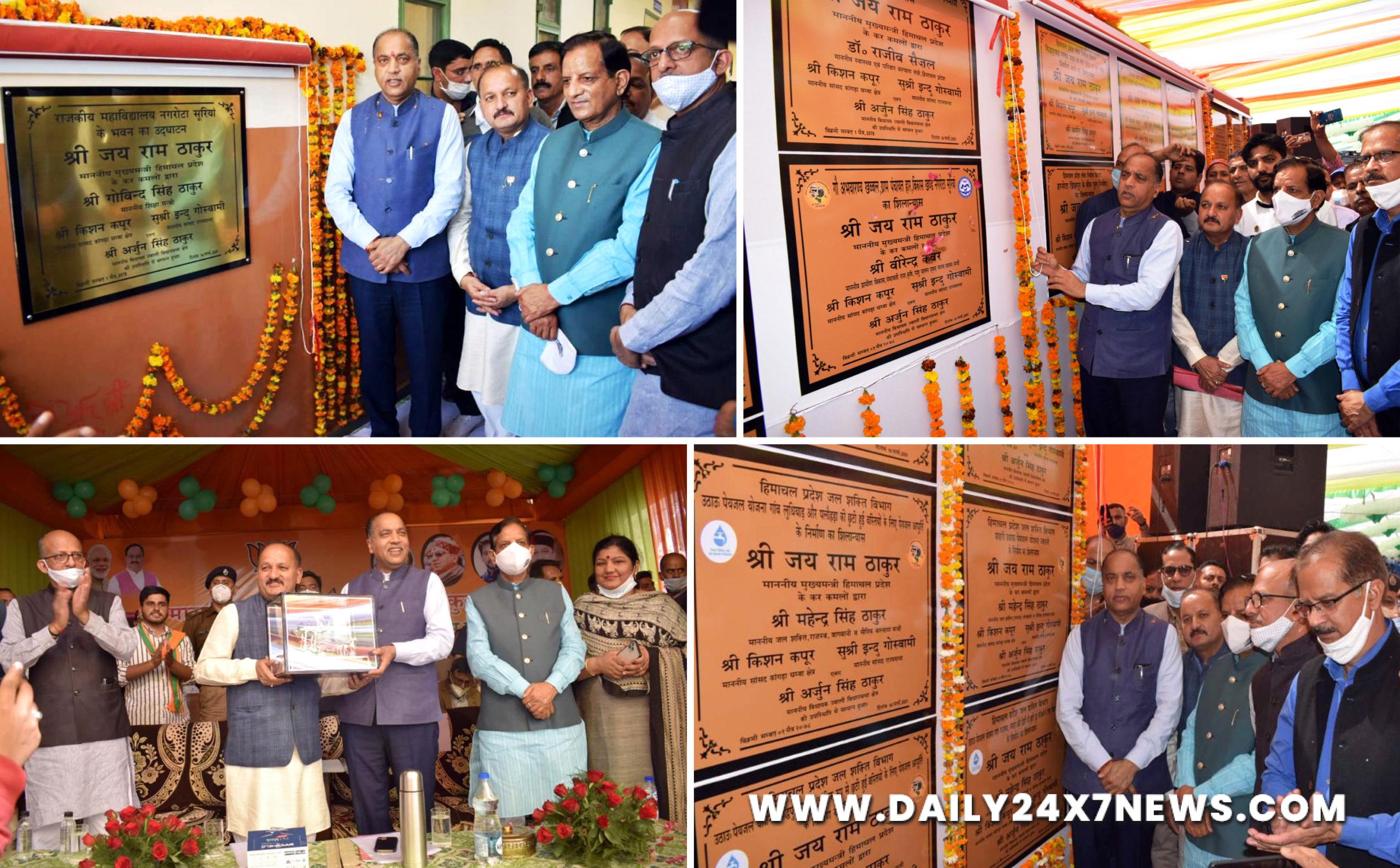 Kangra : Chief Minister Jai Ram Thakur dedicated and laid foundation stones of as many as 21 developmental projects of HP Public Works Department and Jal Shakti Vibhag at a collective cost of Rs. 161.58 crores in Jawali constituency of Kangra district today. He announced the upgradation of Sub-Tehsil, Nagrota Surian to Tehsil.He inaugurated three and laid foundation stones of 10 projects under HPPWD Division Jawali. He dedicated building of Government Degree College, Nagrota Surain worth Rs. 6.17 crore and opened Atal Adarsh Vidyalay, Kotla. He laid foundation stones of link road from Karota Bantungli Shahid Sangat Singh House to be built at a cost of Rs. 3.66 crore, building of Government Degree College, Jawali at Rs. 5.00 crore, additional building of CHC, Nagrota Surian at Rs. 5.47 crore, additional block Civil Hospital Jawali at Rs. 6.42 crore, Rajol Anuhi Bagga road at Rs. 7.04 crore, Harnota to Jinjpur road at Rs. 5.55 crore, Giran Khad Nod Kut Jarpal Upper Amlela to Amlela road joining Amlela Ghar Jarot road at Rs. 4.03 crore, Sidhpurghar Bhallad road worth Rs. 7.43 crore, link road Manav Bharati School Nadholi to Rupata at Rs. 2.92 crore and Cow Sanctuary at Khabbal, GP Har worth Rs. 4.00 crore.
The Chief Minister also laid foundation stones of various Water Supply Schemes (WSS) to be completed by Jal Shakti Vibhag. These included augmentation of various WSS under Jawali Division at a cost of Rs. 40.77 crores, providing Lift Water Supply Scheme (LWSS) Ghar Jarot and other Multi Village Rural Water Supply for part of Nagrota Surian Block at Rs. 29.66 crores, providing Urban Water Supply Scheme, Jawali worth Rs. 15.76 crores, providing LWSS to partially covered habitation of census village Paloura Ludhiar etc. at a cost of Rs. 6.57 crores, LWSS to PC Habitation of village Palanth, Manara and Dehri worth Rs. 2.56 crores and LWSS to PC Habitation of census villages Sidhpurghar at Rs.5.89 crores.
Later, while addressing a huge public meeting at Bus Stand, Nagrota Surian, Chief Minister Jai Ram Thakur congratulated the people of Jawali constituency for developing at a rapid pace. He said that all-round development is being executed at a brisk pace across the State without any discrimination. He thanked the people for supporting the Central and State Governments as a rock amid Covid-19 crisis and following all guidelines in spirit issued by various authorities. He said that the Prime Minister Narendra Modi steered the Nation amid this testing time and provided vibrant, transparent and dynamic leadership. He safely took the Country to the shore and emerged as world leader due to his outstanding leadership qualities. Decade old problems and issues like construction of Shri Ram Temple, revocation of Article 370 and 35 (A), Standoff at borders etc. were solved due to his strong and resolute leadership.He said that various people including students, workmen and entrepreneurs stranded across the country during Corona crisis mainly at Kota, Goa and south were brought back to their native places. Over 2.5 lakhs people came back to their villages last year. Various Mahila Mandals, Youth Clubs, NGOs and individual distributed masks, sanitizers and free ration to the needy in the State. All people worked coherently to get over the pandemic. Today India is making over 6 lakh PPE kits daily and now the country became self-sufficient in producing N-90 masks, PPE kits and Corona vaccine. He thanked the Prime Minister for giving 500 ventilators to the State when requested. He requested the people to co-operate in the vaccination campaign. He said that the country has to move ahead in spite of all difficulties and we should come forward to take the Nation at the top.Taking a gibe at the opposition the Chief Minister said that instead of co-operating the State Government during the Corona crisis, they merely kept on criticizing the Government and did not render any help. He thanked the people for giving clean sweep in the Lok Sabha General Elections-2019 and thumping majority in PRIs Elections held recently in the State.
He elaborated over various welfare schemes and programmes like Jan Manch, Social Security Pensions to various beneficiaries, Mukhya Mantri Sewa Sankalp Yojana, Him Care Yojana, Sahara Yojana etc being executed by his government. Social security pension of one thousand rupees is being provided to the women on attaining 65years of age, which has been enhanced to Rs. 1,500 at turning 70. He said his that his government believed in giving relief to the common man without any discrimination in the State. Over Rs. 150 crore has been spent for providing free treatment to patients under Him Care Scheme. During the current financial year 12,000 houses would be constructed for the houseless in the State.Jai Ram Thakur announced upgradation of Government High School, Nadoli to Government Senior Secondary School, bed capacity of CHC, Nagrota Surian to be increase to 50 beds and Rs. 10 lakh each for Matlahad to Samlana, Safeda mod to Solda, Harijan Basti Mata Ghat to Sihuni and Dabai to Neol road. He said that the issue of construction of Railway over bridge at Ghar Jarot would be taken up with the Union Railway Minister Piyush Goyal and all possibilities would be explored for the improvement of Dehra-Jawali Road under CRF and vocational classes would be started only after following all codal formalities. He assured to ponder over the demand of upgradation of by-pass road. He said that a Police Chowki has already been sanctioned for Nagrota Surian. MP Kishan Kapoor also conversed with the public on the occasion. He briefed about various welfare and developmental schemes, policies, programmes and projects of Central Government. Local MLA Arjun Singh while welcoming the chief guest and other dignitaries thanked the Chief Minister for dedicating and laying foundation stones of nearly two dozen developmental works in Jawali constituency. He also presented various developmental and welfare demands of his area, which included repair of roads, construction of Railway Over Bridge at Ghar Jarot, by-pass and science laboratories in schools, up-gradation of schools and hospitals, filling of posts etc. Social Justice and Empowerment Minister Sarveen Chaudhary, MLAs Rita Dhiman, Rakesh Jamwal, Hoshiar Singh and Ravinder Dhiman were among others who were present in the public meeting.