Chief Minister Jai Ram Thakur while addressing the State Executive Committee Meeting of BJP IT Department at Baddi in Solan district said that IT Department of the BJP was indeed playing a vital role in effectively strengthening the BJP by highlighting the policies, 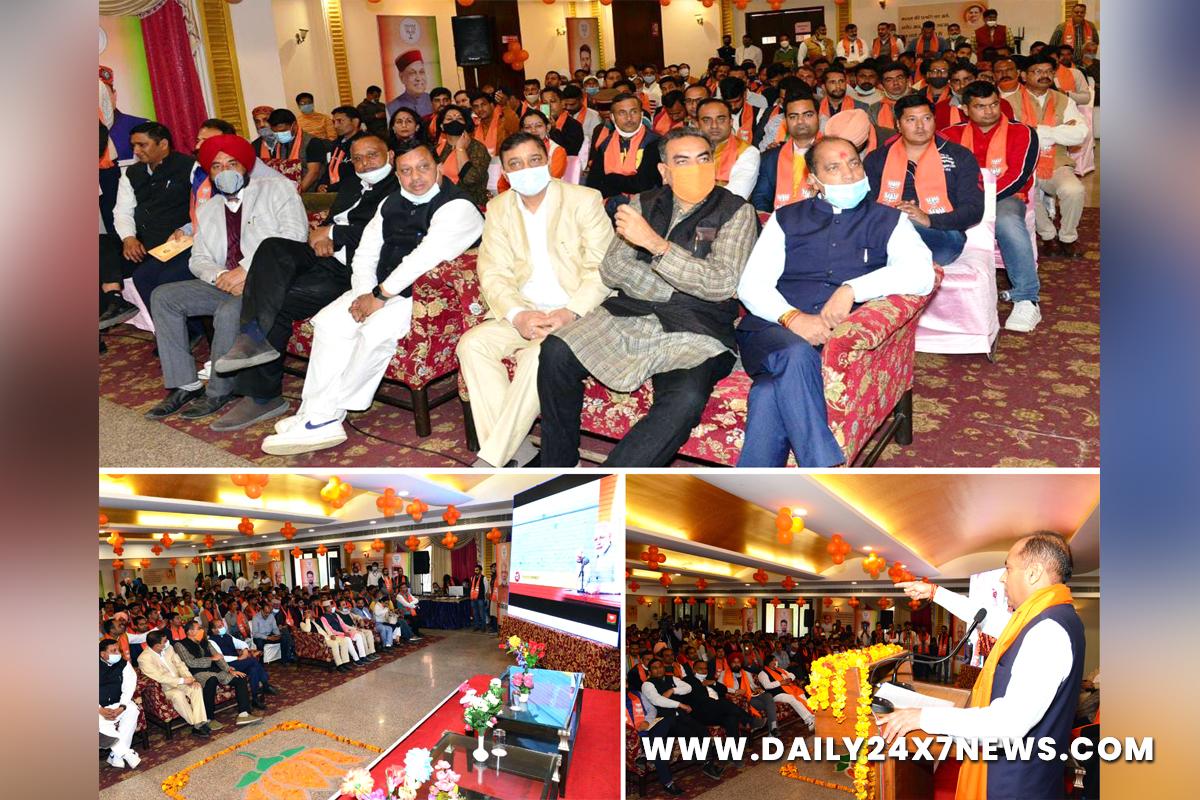 Baddi (Solan) : Chief Minister Jai Ram Thakur while addressing the State Executive Committee Meeting of BJP IT Department at Baddi in Solan district said that IT Department of the BJP was indeed playing a vital role in effectively strengthening the BJP by highlighting the policies, programmes, achievements etc. of the State Government as well as BJP in the State. He said that a proactive stance must be adopted to disseminate the achievements of the State Government and the State BJP and also counter false propaganda of opposition.Chief Minister said that the present era was an era of information and communication, thus it becomes vital to ensure effective use of social media to reach out to the people of the State. He said that during the Corona pandemic the State Government and the Party ensured that optimum use of social media was made not only to help the people in distress but also for regularly monitoring the situation during the pandemic. He said that several meetings were also held virtually with the Prime Minister and other Central leaders. He said that the IT Cell of the State played a major role in ensuring proper contact and communication amongst the party workers as well as with the leaders and the masses.Chief Minister said that Prime Minister Narendra Modi way back in 2014 put forth a vision of ‘Digital India’ to motive and promote Information Technology in our day to day life. He said that BJP IT members must ensure prompt dissemination of news regarding vital decisions such as Cabinet decisions, major decisions for welfare of the people etc. He said that the unfortunate incident of Vidhan Sabha was highly condemned by the each and every person of the State.

He also urged the State IT Cell to spread this uncalled for incidence through social media to expose the real face of Congress.Jai Ram Thakur said that out of the 11 Zila Parishads, 9 were won by the BJP supported candidates and the Congress managed to win in only two Zila Parishads. He said that now the time was to show their place to the Congress in the Municipal Corporation elections and thereafter in 2022 Vidhan Sabha elections. He said that social media was the most powerful tool for effectively countering the false propaganda of the opposition. He said that today the Nation was led by a strong leader Prime Minister Narendra Modi, who has emerged as the world leader. Chief Minister urged the State BJP IT Department to work with greater dedication to achieve the goal of ‘Gram Sabha to Vidhan Sabha’ in the 2022 Vidhan Sabha elections. Member of Parliament and State BJP President Suresh Kashyap thanked the Chief Minister for sparing his valuable time to guide the members of State IT Cell. He said that IT Cell of the State BJP has a major role to play in ensuring the Mission Repeat of the BJP Government in the State. He said that the need was to effectively disseminate the policies and programmes of the State Government, besides effectively countering the false propaganda of the Congress by best use of social media.State BJP IT Convener Chetan Bragta welcomed the Chief Minister,  Co-Incharge of State BJP Sanjay Tondon and other dignitaries present on the occasion. Chief Minister also listened to the “Man Ki Baat’ programme of Prime Minister Narendra Modi on the occasion.Rural Development, Panchayati Raj and Animal Husbandry Minister Virender Kanwar, Health Minister Dr Rajiv Saizal, MLA Doon Paramjit Singh Pammi, Vice President State BJP Prushotam Guleria, former MLA Vinod Chandel and KL Thakur were also present on the occasion.