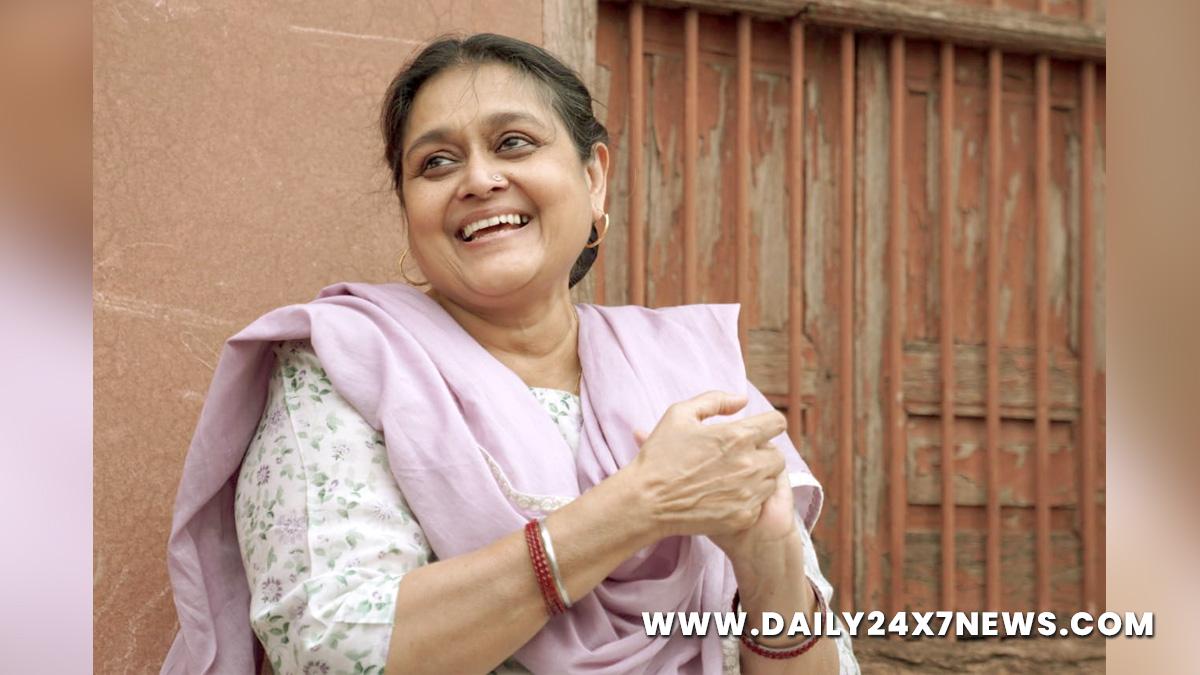 Mumbai : In recent times veteran actress Supriya Pathak is seen playing the character of a mother in two very different projects – web series ‘Tabbar’ and feature film ‘Rashmi Rocket’.Not only are both the stories set in very distinct landscapes like Punjab and Rann of Kutch but also these two women are very different from one another. Supriya says no one can stereotype mothers because in reality no two mothers are the same.In a conversation with IANS, Supriya looks back at four of such characters she played of mothers and how one is very different from another.”Firstly I have to mention that at this age, it is only natural that filmmakers will offer me more mother character and as a performing artiste who has been doing theatre for so long, I never look down upon any character. When it comes to mother’s character in our cinema, though it is true that a lot depends on writing, I would say, we also can break stereotypes through our performance. You cannot stereotype mothers because no two mothers are same in reality,” Supriya told IANS.’Sarkar’ (Trilogy): “In that series of films, my character Pushpa Nagre is a wife first before a mother. Her world revolves around following the command of ‘Sarkar’ but she also has a responsibility towards her sons, especially her younger son. She is constantly balancing between being a mother and a dutiful wife. It is through the performance how we as actors find and show the balance to our audience,” said Spuriya.’Sarkar’ is a film by Ram Gopal Varma and it featured Amitabh Bachchan in the title role.’Wake Up Sid’: Directed by Ayan Mukherjee, the story of the film revolves around a youngster Sidharth, played by Ranbir Kapoor.

“The mother I play in that ‘Sarita’, has many moments. When I was reading the script, I got tears in my eyes when she said to her son ‘main agar English mein baat nehi karungi to tumhari friend kaise banungi’…and then she uttered wrong English words. Her world revolves around her son so when he left the house, whether flipping through Sid’s childhood photos, sending mangos etc. she was trying to deal with the loneliness because she missed her son terribly. She was a mother who does not know anything in the world apart from her son’s well-being. In a way, that’s quite a common instinct in every mother,” smiled Supriya.’Goliyon Ki Raasleela Ram-Leela’: The Sanjay Leela Bhansali directorial in which she plays Dhankor, the mother of Deepika Padukone. The character was that of quite a brutal woman who even chopped a finger off her daughter when she disobeyed her mother.”Yes, that was quite a layered character even though she comes across like a brutal woman who is leading a business of guns and goons in the men’s world. You see, a mother could go to any extent to protect her daughter. The reason why she was against the relationship between Ram and Leela was very simple. She knew that Ram’s family was not the right family for her daughter. The idea behind stopping her daughter was to protect her, but her way and action was very violent; but still Dhankor is a mother.

That is a different shade of mother,” shared Supriya.’Tabbar’: The 8-episode web series directed by Ajitpal Singh released on SonyLIV is one of the shows where according to Supriya, the character offers many shades rolled into one.”Sargun is a mother who is the caregiver of her family but she is a wife with a very intense emotional and spiritual relationship with her husband. So the canvas was wider to portray emotions.Without giving any spoiler, Sargun is one of such characters that shows what happens when a loving mother takes a turn in a specific situation,” pointed out Supriya.’Rashmi Rocket’: The film that was released on October 15, tells the story of an athlete whose world turns upside down when she goes through a gender test. The title role is played by Taapsee Pannu and Supriya plays her mother Bhanuben.”Being a mother of two children in my real life, I have understood one thing that is very important. When a child is in trouble how small or old she/he becomes, a mother and only a mother can give that confidence and safety blanket to them. So you never doubt a mother’s instinct even though at times it comes across next to impossible.”She further added, “A mother-child relationship starts from the time we get the first sign of pregnancy. We change emotionally and physically forever with childbirth. So the bonding starts from there. That does not happen with fathers; a father has to prove his fatherhood and build a relationship with the child. But a mother-child relationship is an in-built one. So the ‘hausla’, the ‘josh’ that someone like Rashmi gathers is coming from the fact that her mother has a strong emotional support,” Supriya shared.

Naga Shaurya in place of Naga Chaitanya for ‘Varudu Kaavalenu’

Daler Mehndi out with his new track ‘Rola Pe Gaya’