“It will take 5-10 years for India to end economic & technology dependence on China” : Rahul Bhandari 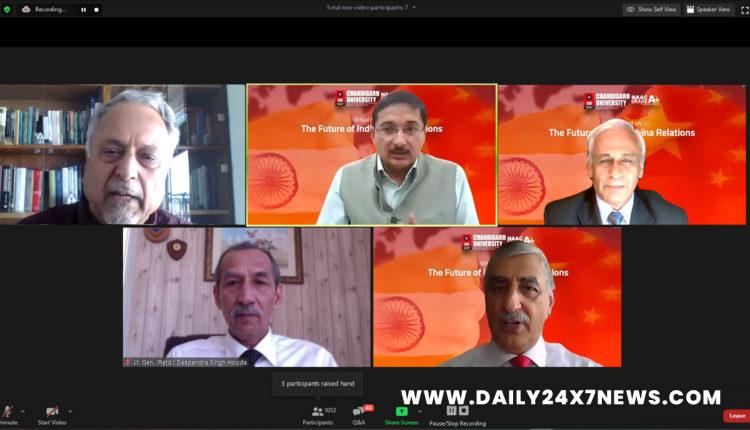 Gharuan :  “India should include south Asian countries like Vietnam, Taiwan as the fourth pillar of the Quadrilateral Security Dialogue (QUAD)” says Bharat Karnad, National Security Expert
“The tense situation at Indo-China border in Eastern Ladakh will continue and will not ease-off as Chinese Army (PLA) has adopted to a stubborn stance and is not ready to disengage on-ground” said Lt. Gen. (Retd.) Deependra Singh Hooda, Former General Officer Commanding-in-Chief Northern Command. The veteran army general was speaking during the Virtual Meet on “The Future of Indo-China Relations” organized by Chandigarh University, Gharuan. The Virtual Meet was attended by former Indian Army General, former Indian Navy Chief, National Security Experts and Senior Administration Officials of Government of Punjab who interacted with the students to apprise them about the on-ground situation between the two Asian Powers. Amongst other dignitaries who took part in the Virtual Meet on Indo-China relations included Admiral (Retd) Sunil Lanba, former Indian Navy Chief and Ex-Chairman of Chiefs of Staff Committee, Lt. Gen. (Retd) Parveen Bakshi, former General Office Commanding-in-Chief Eastern Command, Indian Army, Mr. Bharat Karnad, National Security Expert and Emeritus Professor, Centre for Policy Research and Mr. Rahul Bhandari (IAS), Secretary Higher Education, Water Resources, Mines & Geology, Government of Punjab.While giving details about the current border situation, Lt. Gen. (Retd.) Hooda said, “Although a series of military level, diplomatic level and ministerial level talks have taken place between the two countries over the period of last months, yet the Chinese (PLA) has refused to disengage at ground level and maintain status-quo at line-of-actual control (LAC). There might be some local incidents at LAC but both nuclear powers India & China cannot afford to have a full-fledged war”.
Gen. Hooda further added that, “Both India and China have deployed huge number of army personals who have prepared themselves for long term eyeball to eyeball situation but Indian Army has an tactical advantage over Chinese (PLA) as the Indian Security Forces have operating experience at higher altitudes & hilly terrains in harsh winters”. While talking about the economic front, Rahul Bhandari, Secretary Higher Education, Water Resources, Mines & Geology, Government of Punjab said, “Currently there is huge trade imbalance between India and China which can be ascertained from the fact that Chinese products have 2.7% penetration in Indian markets while Indian goods have merely 0.1% penetration in Chinese markets. India’s 68% of pharmaceutical formulations and 90% of antibiotic medicines are currently coming from China”. Mr. Bhandari further added that, “Banning of social apps by Indian Government has not greatly impacted the Chinese Economy as we are currently importing large number of goods like solar components, electronic goods, IT Hardware, Telecom Components, mobile phones, fertilizers and it will take India 5-10 years to be either self-reliant or search for new partners who can meet our technology needs”.Replying on the question of the possible threat of cyber-attack by China, Admiral (Retd) Sunil Lanba said, “Indian Government is conscious about the fact that China has intruded deep into our technology and communication eco-system through the supply of components by the Chinese firms and that the threat of cyber-attack from our hostile neighbor is real. Although the government is taking preemptive steps by increasing a nationwide alert and stepped up monitoring by intelligence agencies, but a-lot have to done in terms of hardware & technology installation”. India should not rely on USA as it has not been a reliable ally which can be ascertained from the cases of Japan and South Korea. We should include South Asian countries like Vietnam, Taiwan as the fourth pillar of the Quadrilateral Security Dialogue (QUAD) who understands the ecosystem in Indo-Pacific region” said Bharat Karnad, National Security Expert and Emeritus Professor, Centre for Policy Research. He further said, “India needs to speed-up its defense spending as the gap between China’s Defense Budget and Indian Defense Budget will touch US$ 500 billion by 2030 which create regional imbalance between the two Asian countries”.