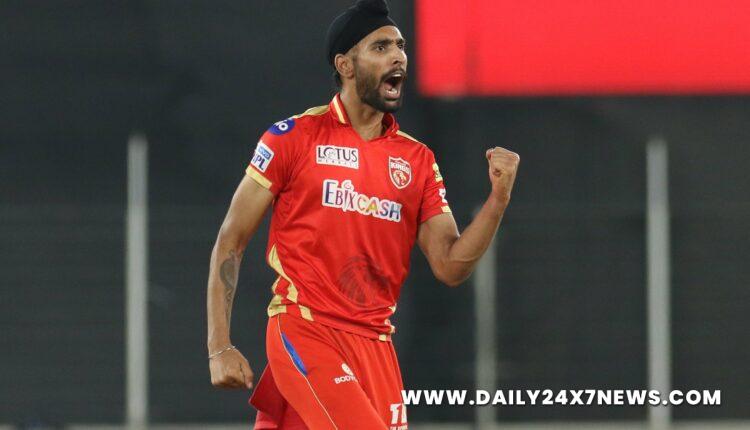 New Delhi : Punjab Kings all-rounder Harpreet Brar, who dismantled the Royal Challengers Bangalore’s (RCB) strong batting line up with a three-wicket haul on Friday night, takes pride in wearing his turban.A week back, the 25-year-old left-arm spinner from Moga hit back at a troll on Instagram who compared him to Bollywood star Akshay Kumar from the movie ‘Singh Is Bliing’.Brar took offence to the comparison and took a dig at the movie star Kumar. The 53-year-old Kumar had played the role of a turbaned Sikh in the 2015 flick that did well at the box office.”Paaji aap singisbling ke Akshay Kumar dikhte ho (Brother, you look like Akshay Kumar in the movie Singh is Bliing),” wrote the troll on his Instagram account.Brar was not amused.”Paise k liye Turban nhi pehnte hum (We don’t wear turban for money)[Emoticon: Folded hands] #isupportfarmers,” he responded on his Twitter account with the screenshot of the question on his Instagram timeline.This is Brar’s third IPL season but he has played only four matches in his career. Friday’s game was the first in IPL 2021.It, however, became a memorable one. He scored a 17-ball unbeaten 25 and then removed RCB skipper Virat Kohli, AB de Villiers and Glenn Maxwell to put the brakes on RCB’s chase.Thanks to his all-round show, the Punjab franchise won the match by 34 runs.