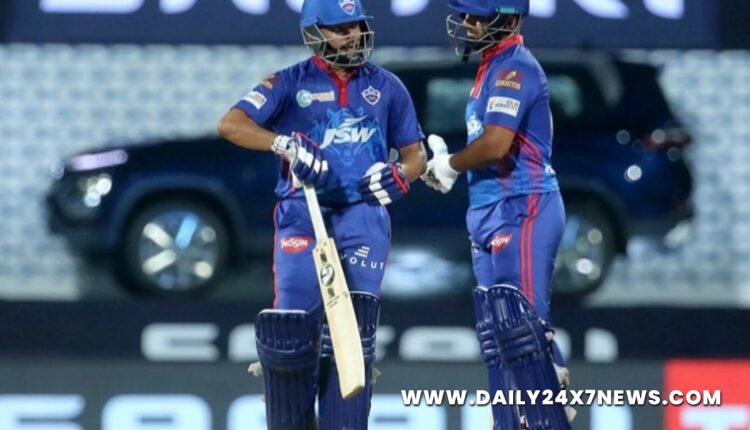 Ahmedabad : Prithvi Shaw’s rampaging 41-ball 82 (11x4s, 3x6s) helped Delhi Capitals (DC) power to a seven-wicket win over Kolkata Knight Riders (KKR) in an Indian Premier League (IPL) match here at the Narendra Modi Stadium on Thursday night.Chasing 154/6 put up by KKR, Shaw went after the bowling right from the start, taking 25 runs (including one wide) off Shivam Mavi’s first over. He thrashed six fours of the first six legitimate deliveries of the innings. It was the third most expensive over in IPL history.KKR kept changing bowlers but runs kept flowing and soon DC reached 67 without loss at the end of the powerplay phase. This is the best powerplay score in the 2021 IPL season.Shaw soon reached his fifty off 18 balls as Shikhar Dhawan (46 off 47 balls) took his time at the other end. The two opening batsmen added 132 runs in 13.5 overs and brought their team on the door to victory.
Shaw was dismissed caught off a short delivery from Pat Cummins soon after Dhawan has been dismissed leg-before the wicket by the same bowler.Earlier, Andre Russell’s 27-ball unbeaten 45 had helped KKR reach 154/6 in 20 overs.KKR were in danger of getting restricted to a below-par total. They were 109 for six in 16.2 overs. However, Russell’s innings, comprising four sixes and two fours, took the team to a total with which they were expected to compete.The Kolkata franchise had begun well, reaching 73 for two after 10 overs. The platform was set for the batsmen to score big. However, two quick wickets in the 11th over, bowled by spinner Lalit Yadav, pegged them back.A couple of overs later, opener Shubman Gill followed for 43 (off 38 balls).Russell and Dinesh Karthik then set about resurrecting the innings before the West Indian opened up.He took 11 runs off the 18th over bowled by Avesh Khan, 18 runs in the 19th bowled by Kagiso Rabada and 13 in the 20th bowled by Avesh. But it didn’t prove enough.
Brief scores: Kolkata Knight Riders 154/6 in 20 overs (A Russell 45 not out, S Gill 43, L Yadav 2/13, A Patel 2/32) vs Delhi Capitals 156/3 in 16.3 overs (P Shaw 82, S Dhawan 46, P Cummins 3/24).

Hat-trick for Mamata Banerjee in Bengal, indicate all exit polls save two