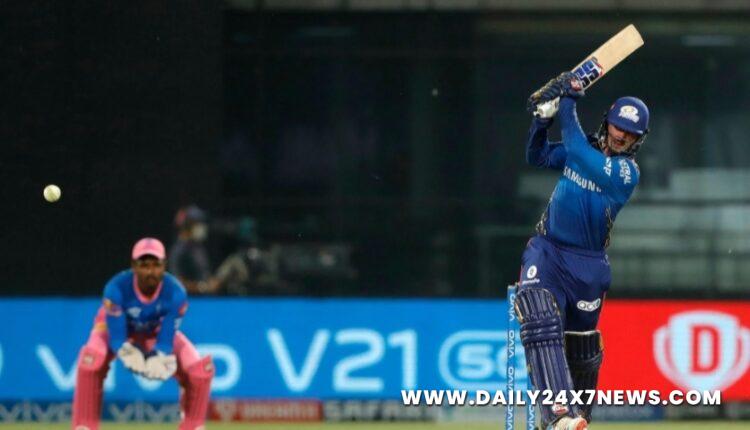 New Delhi : Quinton de Kock’s unbeaten 70 and some masterful bowling from Jasprit Bumrah in the death overs helped Mumbai Indians (MI) beat Rajasthan Royals (RR) by seven wickets in the Indian Premier League (IPL) at the Arun Jaitley Stadium on Thursday.The left-handed Proteas opener’s 63-run stand with Krunal Pandya (39) for the third wicket helped MI chase down a target of 172 with nine balls to spare.Earlier, Jasprit Bumrah led the way as the five-time champions put the brakes on RR’s innings to restrict them to 171/4. Chris Morris dismissed MI captain Rohit Sharma and Suryakumar Yadav in the first 10 overs but de Kock and Pandya then closed out any chances that may have opened up for RR.Pandya eventually fell in the 17th over to Mustafizur Rahman after which Kieron Pollard smashed 16 runs in eight balls to take MI over the line.Earlier, MI conceded 45 runs and took two wickets in the last five overs with Bumrah leading the way in stifling RR for runs. He conceded just five runs in the 17th over and four in the 19th, in which he took the wicket of Shivam Dube.Trent Boult, meanwhile, dismissed RR captain Sanju Samson (42) in the 18th over. The wicket ended a 57-run stand between Samson and Dube that came off 49 balls for the third wicket.Brief scores: Rajasthan Royals 171/4 in 20 overs (Sanju Samson 42, Jos Buttler 41; Rahul Chahar 2/33, Jasprit Bumrah 1/15) lost to Mumbai Indians 172/3 in 18.3 overs (Quinton de Kock 70 not out, Krunal Pandya 39; Chris Morris 2/33) by seven wickets with nine balls to spare