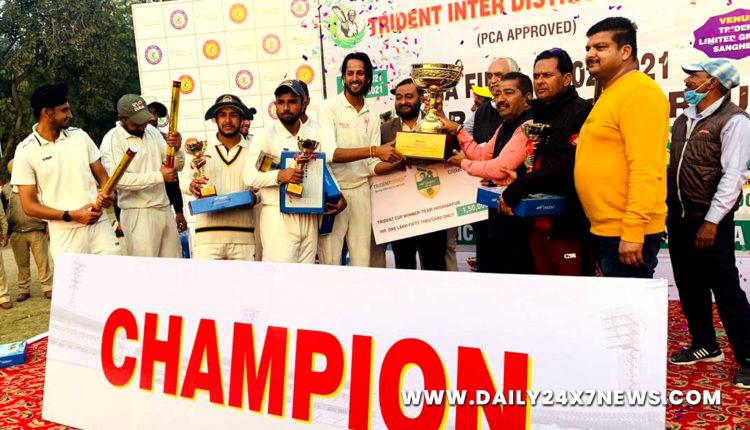 Barnala  :  Hoshiarpur DCA won the Trident Inter District One Day Cricket Tournament 2021 by beating Muktsar DCA in the finals played at Trident Complex Barnala by 44 runs. The ground covered under the thick fog in the morning compelled the organizers to reduce the 50-over match to 34 overs. Muktsar DCA won the toss and invited Hoshiarpur DCA to bat first on a placid track. While batting first Hoshiarpur DCA openers couldn’t do much and in 17 overs 4 of them got out scoring a total of 73 runs only, but later batsmen Happy Kulvir (53 runs in 54 balls with 3 fours and 2 sixes ) and Karambir Singh ( 43 runs in 40 balls with 4 fours and 2 sixes) took control of the situation taking team to a commanding total of 224 runs for loss of 8 wickets in the allotted 34 overs. Last minute flourish of Manjinder Singh scoring 31 runs of 14 balls with 4 fours and 2 sixes added to the excitement of the batting innings. Bowler Amandeep S Sikander of Muktsar took 4 wickets in his spell of 7 overs giving away 56 runs.In reply, Muktsar DCA were off to a good start scoring o 33 runs in 5 overs for the opening wicket between Sherbaz Brar (19 of 14 Balls) and Vishwa Pratap. but bowler Dhamandeep Singh of Hoshiarpur dealt the first blow by removing Sherbaz Brar and immediately after that Karan Saini hit the second  blow by removing Vishwa Pratap. Muktsar DCA lost wickets after that at regular intervals and could not build a partnership to challenge the score of Hoshiarpur DCA. Only batsmen Amandeep Singh Sonu, Dhruv verma showed some resistance. No other batsmen were able to make any solid contribution towards their team total of 180 for 8 wickets in 34 overs. For Hoshiarpur DCA bowlers Karan Saini 7-0-19-3, Ashish Ghai 7-0-31-3 bowled well and made their team win the game by 44 runs.Happy Kulvir of Hoshiarpur DCA was given the man of the match .

In the other match played for the 3rd position in the tournament on 17th Feb at Cops Club Bathinda, Bathinda DCA won the match beating Nawanshahar DCA by 95 runs. Uday Saharan (Bathinda DCA) was declared man of the match for his stellar all round performance. The winning team Hoshiarpur DCA was given 1.50 lakh, the runner up Muktsar DCA team 1 lakh, the third place team Bathinda DCA got a cash prize of 50000. Uday Pratap of Bathinda DCA was adjudged as the best player in the tournament he won a cash prize of 21000.  Harjot Dhawan of Muktsar DCA was adjudged as the best bowler, Kashish Panseja of Muktsar was adjudged as the best batsman, Kawaljeet of Bathinda was adjudged as the best wicket keeper and Jatin of Nawanshahr was adjudged as the best fielder in the tournament. All won a cash prize of Rs 11000 each.In this Punjab Cricket Association-approved tournament, fifteen District Cricket association teams of the state namely — Muktsar, Bathinda, Ropar, Hoshairpur, Ferozepur, Sangrur, Nawansahar, Gurdaspur, Faridkot, Barnala, Kapurthala, Moga, Fazilka, Mansa and Fatehgarh Sahib participated. Chief Guest of the closing ceremony Hon’ble T.P.S. Phoolka, IAS , Deputy Commissioner Barnala, who alongwith Sh Deepak Nanda Managing Director, Trident Limited gave away the prizes to the winner and runner up teams. In his message Padma Shri Rajinder Gupta, Chairman of Trident Group and Chairman of Punjab Cricket Association Mohali said that “It is very important to organize such sporting events so as to provide a world class platform for budding sports persons to polish and improve their game while having a shot at further success and bringing laurels to the country. He added that all our efforts are channelized towards ensuring that Punjab retains its cricketing glory and brings back Ranji Trophy to the state.” Guest of Honour on the occasion were cricketers Piyush Rana, Rakesh Saini, Yograj and Vijay Gatta and Other dignitaries included office bearers of PCA, Presidents and Secretaries of all District Cricket Associations of Punjab. Cricket lovers were present at the ground in huge numbers to watch the game and cheer the players.Best Performers of the AGA Gold Cup under-19 Cricket Tournament, which recently concluded at Amritsar, were also honored at the occasion.