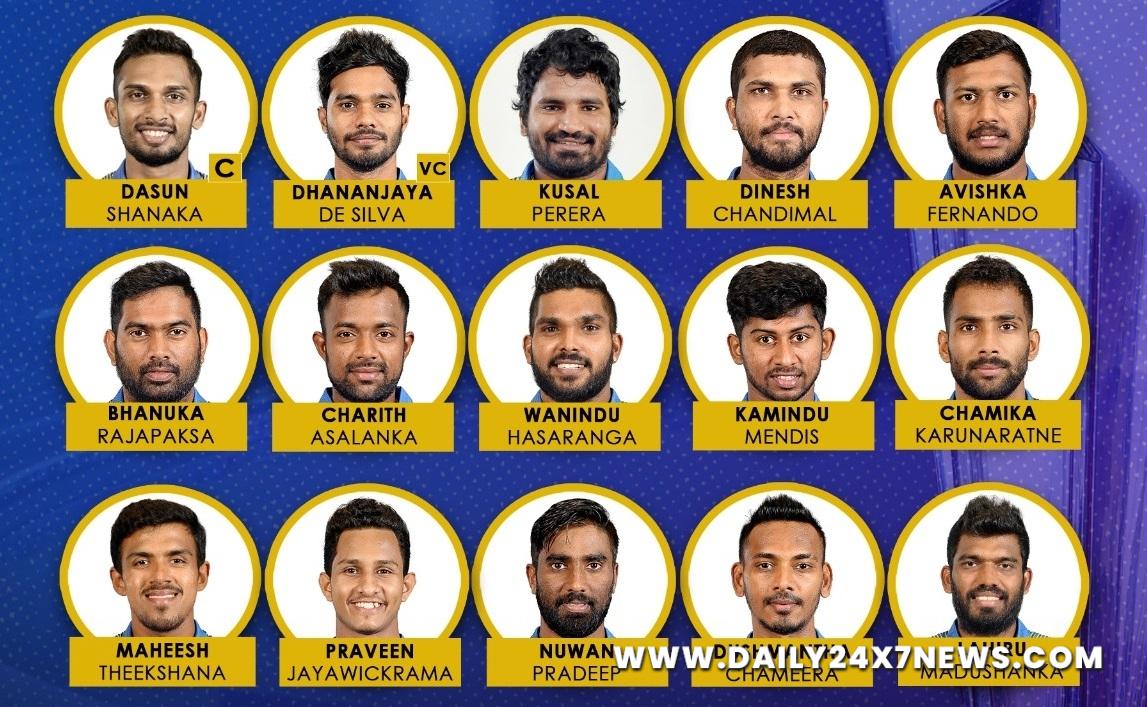 Colombo : Dasun Shanaka will lead a 15-member Sri Lankan squad for the upcoming ICC Men’s T20 World Cup 2021 to be held in the UAE and Oman in October-November this year.Sri Lanka will begin their campaign on October 18 against Namibia in Abu Dhabi in Group A of the First Round, where they have also drawn Ireland and the Netherlands.The only major omissions from the squad were Niroshan Dickwella, Kusal Mendis and Danushka Gunathilaka, who were banned for a year for breaking the Covid-19 protocols on their tour of England in July. With Kusal Perera’s return after an injury, Minod Bhanuka, who was keeping the wickets in Perera’s absence, also misses out.Off-spinner Maheesh Theekshana, 21, who made his T20I debut in the first match against South Africa and dismissed Heinrich Klaasen, has been included. The youngster was also impressive in his ODI debut earlier this week, picking up a four-wicket haul. The other spinners making the squad are left-armer Praveen Jayawickrema, who made his international debut earlier this year, and Wanindu Hasaranga.

Jayawickrema is the only uncapped member in the squad but has been included on the basis of his terrific performances in other formats. He had an excellent Test debut against Bangladesh in April, picking up 11 wickets in the match. He also has played five ODIs so far and picked up five wickets.The fast bowling department will be led by Dushmantha Chameera along with veteran seamer Nuwan Pradeep and all-rounder Chamika Karunaratne.They have also named four reserves, who will travel with the squad as injury cover — Lahiru Kumara, Binura Fernando, Akila Dananjaya and Pulina Tharanga.Sri Lanka are scheduled to leave for Oman on October 3 to take part in two T20 games against Oman on October 7 and 9, ahead of the T20 World Cup.Sri Lanka will also play two ICC-organised World Cup warm-up games, on October 12 and 14, before commencing their T20 World Cup Campaign.”We are looking to play as many games as possible leading into the World Cup in similar conditions the team will experience in the UAE. The games against Oman and the two ICC practice games will allow us this opportunity,” said Ashley de Silva, CEO, Sri Lanka Cricket (SLC).
Squad: Dasun Shanaka (c), Dhananjaya De Silva, Kusal Janith Perera, Dinesh Chandimal, Avishka Fernando, Bhanuka Rajapaksa, Charith Asalanka, Wanindu Hasaranga, Kamindu Mendis, Chamika Karunaratne, Nuwan Pradeep, Dushmantha Chameera, Praveen Jayawickrema, Lahiru Madushanka, Maheesh Theekshana.
Reserves: Lahiru Kumara, Binura Fernando, Akila Dananjaya, Pulina Tharanga.

Had visions of celebration a couple of days back: Emma Raducanu

Loss will be part of memory for a long time but will also motivate me : Leylah Fernandez