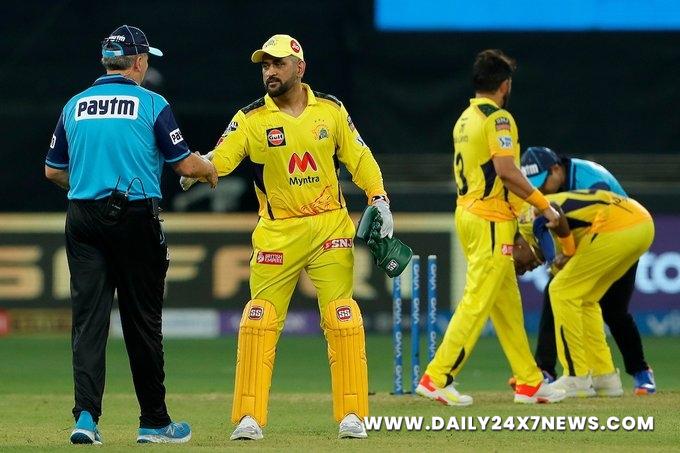 Dubai : Chennai Super Kings rode on a strong show by the bowlers to hand a 20-run defeat to defending champions Mumbai Indians in the first match of UAE leg of IPL 2021. The win now puts Chennai on top of the points table with 12 points from eight matches. This is just the second time Chennai won a match in the IPL after losing four wickets in the power-play.Mumbai’s chase started on a good note with Quinton de Kock collecting two boundaries off Josh Hazlewood in the second over. Though Ruturaj Gaikwad dropped him on six, de Kock couldn’t make most of the reprieve, trapped in front of stumps by a Deepak Chahar incoming delivery.Hazlewood came in for more thrashing as debutant Anmolpreet Singh carted him for three stylish boundaries in the next over. But Singh’s promising stay at the crease was brought to an end by a knuckleball from Chahar ratting his off-stump.Suryakumar Yadav tried to loft on the up but mistimed off bottom of the bat off Shardul Thakur. The catch was comfortably snapped by Faf du Plessis running from mid-off. Ishan Kishan threw his hands at a slower outside off delivery from Dwayne Bravo, only to hit straight to Suresh Raina at cover.

Swiatek gets past Cirstea; Cornet in Grand Slam QF…

Kieron Pollard and Saurabh Tiwary thumped some boundaries in their 29-run partnership. But Hazlewood struck Pollard past the flick on the back pad with a sharp inswinger that stayed low. In the next over, Krunal Pandya went for a non-existent single and tried to come back with a desperate dive but fell short of crease.Tiwary, dropped at 41, kept Mumbai in the hunt as Thakur conceded 15 runs off the 19th over, including a six by Adam Milne. With 24 needed off the final over, Milne swung straight to deep mid-wicket in the final over off Bravo.Tiwary brought up a hard-fought half-century. But Bravo took the wicket of Rahul Chahar on the next ball to hand Mumbai their first loss in the UAE leg of the IPL 2021. Mumbai will rue the lack of big partnerships as Chennai put on the choke.
Brief scores: Chennai Super Kings 156/6 in 20 overs (Ruturaj Gaikwad 88 not out, Ravindra Jadeja 26, Adam Milne 2/21, Jasprit Bumrah 2/33) beat Mumbai Indians 136/8 in 20 overs (Saurabh Tiwary 50 not out, Quinton de Kock 17, Dwayne Bravo 3/25, Deepak Chahar 2/19) by 20 runs.

Given a choice, I’d like to do a Navy role : Mohit Raina

Swiatek gets past Cirstea; Cornet in Grand Slam QF for first time in 63 attempts