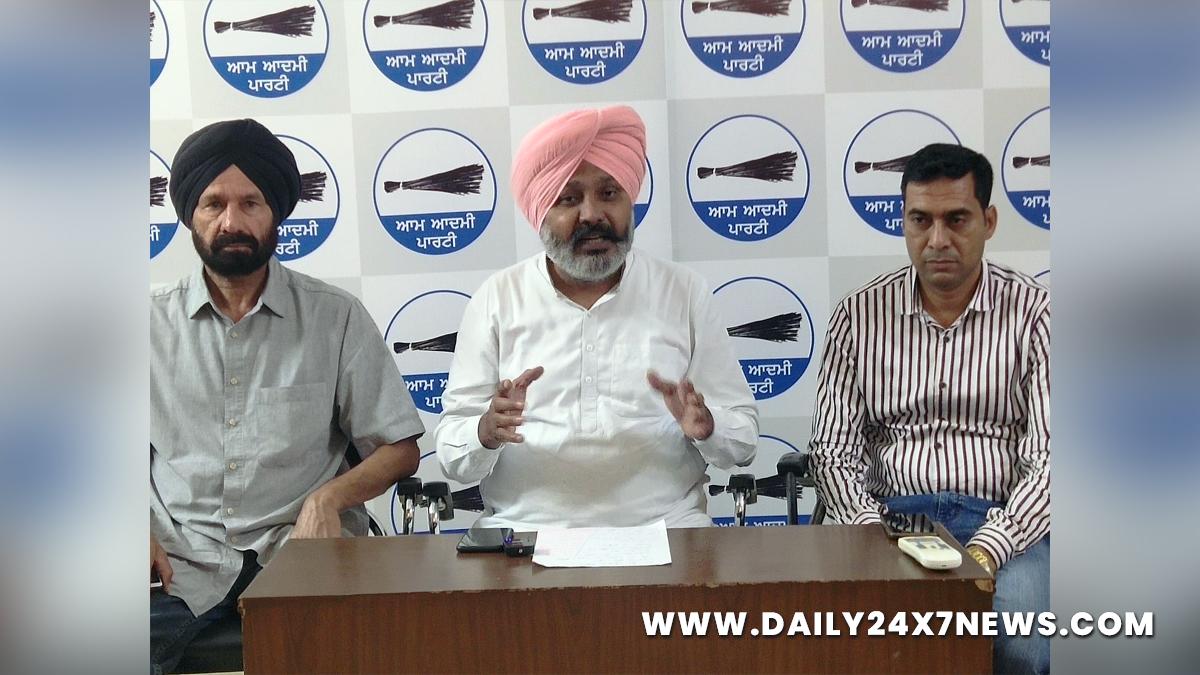 Chandigarh : Reacting to the revelation made by Shiromani Akali Dal president Sukhbir Singh Badal regarding the formation of Capt Amarinder Singh’s government with the help of BJP-RSS during the 2017 Assembly elections, senior leader of the Aam Aadmi Party (AAP) Punjab and Leader of Opposition, Harpal Singh Cheema said, “Sukhbir Singh Badal has spoken half and not the whole truth, while everyone knows that Captain-Congress, BJP-RSS and the Badal family had formed a nefarious alliance to prevent the Aam Aadmi Party from coming to power; the mastermind of which was Sukhbir Singh Badal himself.”Addressing a press conference held at the party headquarters here on Sunday, Harpal Singh Cheema said that the words of Sukhbir Singh Badal did not tell the whole truth about the alliance between Capt Amarinder Singh and the Congress with the BJP-RSS, because Sukhbir Singh Badal and the entire Akali Dal Badal have been seizing power in Punjab in alliance with the BJP-RSS. Regarding the last Punjab Assembly elections of 2017, Sukhbir Badal should tell the whole truth that like the BJP-RSS, the Akali Dal Badal had voted for the Congress and Capt Amarinder Singh through its workers. But it takes a living conscience to speak the truth, which has long been held hostage by greed for power and money, he added.

Harpal Singh Cheema questioned Sukhbir Singh Badal whether it was not a joint decision of this alliance that Capt Amarinder Singh contested to make Parkash Singh Badal win from Lambi and Ravneet Singh Bittu to contest from Jalalabad to make Sukhbir Singh Badal win? He alleged, “The Akali Dal Badal, the Congress and Capt Amarinder Singh, Bharatiya Janata Party (BJP) and the RSS are still colluding to keep the Aam Aadmi Party out of Punjab, as exemplified by these parties in the 2017 elections.”He said Captain and Sukhbir Badal along with the BJP-RSS did not want the sons and daughters of common people of Punjab to form their own government and solve their problems. They do not want the children of the common people to get good education, good treatment, can enjoy the public service government; free from corruption and nepotism; because if that happens then their mafia rule which runs with a share of 75:25 will come to an end; which the Punjab Pradesh Congress president Navjot Singh Sidhu has mentioned many a times.The AAP leader further said that the BJP-RSS collusion with the Congress, Captain and the Badals had come to light and the remote control of all these was in the hands of Prime Minister Narendra Modi. Therefore, the people of Punjab will not fall prey to this nefarious alliance in the 2022 elections and will give a chance to the Aam Aadmi Party. Harpal Singh Cheema said that the present Congress Chief Minister Charanjit Singh Channi had also made a deal with Narendra Modi following in the footsteps of Capt Amarinder Singh. Evidence of this was found when half of Punjab was handed over to Narendra Modi through the BSF because Narendra Modi knows that the BJP has no base in Punjab; that is why he has worked to keep Punjab under his control through Congress chief ministers, he asserted.He said that all the opposition parties including Narendra Modi were appalled by the love shown by the people of Punjab to the Aam Aadmi Party and its national convener Arvind Kejriwal; that is why Narendra Modi formed an alliance of the Congress, Captain, Badals and BSP to stop the AAP from coming to power in Punjab. Cheema was accompanied by party spokespersons Jagtar Singh Sanghera and Govinder Mittal on the occasion.

Agriculture Department continues its drive against…