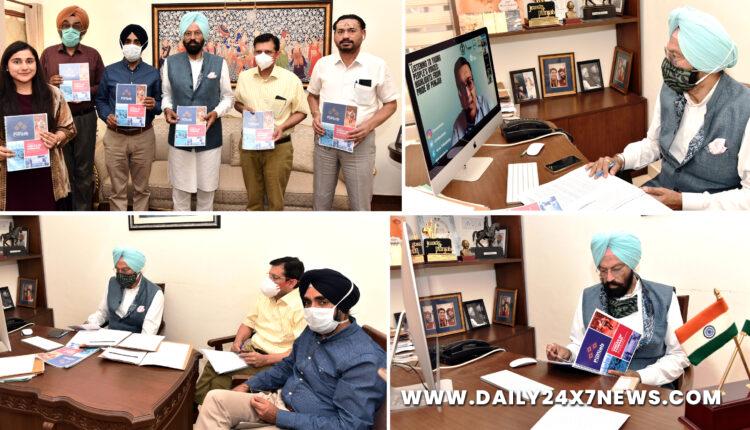 Chandigarh : Punjab Sports and Youth Services Minister Rana Gurmit Singh Sodhi on Monday launched the second phase of ‘Pride of Punjab’ program besides releasing the ‘Voices of YuWaah’ report jointly prepared by Government of Punjab and UNICEF (YuWaah) at his official residence here.Attending virtual program along with Principal Secretary Sports Mr. Anurag Verma and Director Sports Mr. D.P.S. Kharbanda, , Rana Sodhi informed that ‘Pride of Punjab’ a joint initiative of Punjab Government and UNICEF (YuWaah) and the first phase was launched by Chief Minister Capt. Amarinder Singh in August 2020. He said that now with the beginning of the Phase 2 of Pride of Punjab, the program aims to provide access to career guidance, skilling, entrepreneurial skills and job connects to the young people of the state, to facilitate their aspirational journeys.The Cabinet Minister said that by engaging youth organizations, government bodies, corporate partners, technology companies and multilateral organizations, Pride of Punjab aims to connect at least 1,00,000 youth across 22 districts of Punjab with aspirational economic opportunities, relevant 21st century skills, and prospects for civic decision-making. In partnership with the Punjab Government and NGO stakeholders, YuWaah has been undertaking programming for civic engagement in the state, with the aim to empower youth with 21st Century Skills like critical thinking, problem solving, communication, data orientation, applied empathy, enabling them to rise as decision-makers, change-makers and local leaders.
Delivering the opening remarks for the event, Rana Sodhi said, “We, at the Government of Punjab, stand firmly behind the young people to assist them in engaging with their communities, linking them to technical education, skilling them and enabling them to be fruitfully employed. We are committed to young people in the present, because they are our future. As the nodal department, our Sports & Youth Services Department is enthused about working with UNICEF and partners in making this program successful. ‘Pride of Punjab’ is of the youth, for the youth and with the youth.”Prior to this, Chief Operating Officer of Yuwaah Mr. Abhishek Gupta said, “The insights garnered from a large-scale U-Report poll to assess more than 28,000 young people’s access to learning, skilling and employment, which are part of the ‘Voices of YuWaah’ report launched by the partnership, have informed the subsequent program for Pride of Punjab. Based on these insights, the program will now offer skilling, career guidance, and job connects to the young people of the state, to help them realise their aspirations.”This launch was followed by a panel discussion about aligning government schemes with the needs of Punjab’s youth, and supporting entrepreneurship and innovation for creating jobs. On this occasion Joint Director Sports Mr. Kartar Singh and Governance Fellow, Government of Punjab Ms. Tapinder Kaur Ghuman was also present.

Administrative process completed for construction of 3 medical colleges in the state-work will start soon : OP Soni