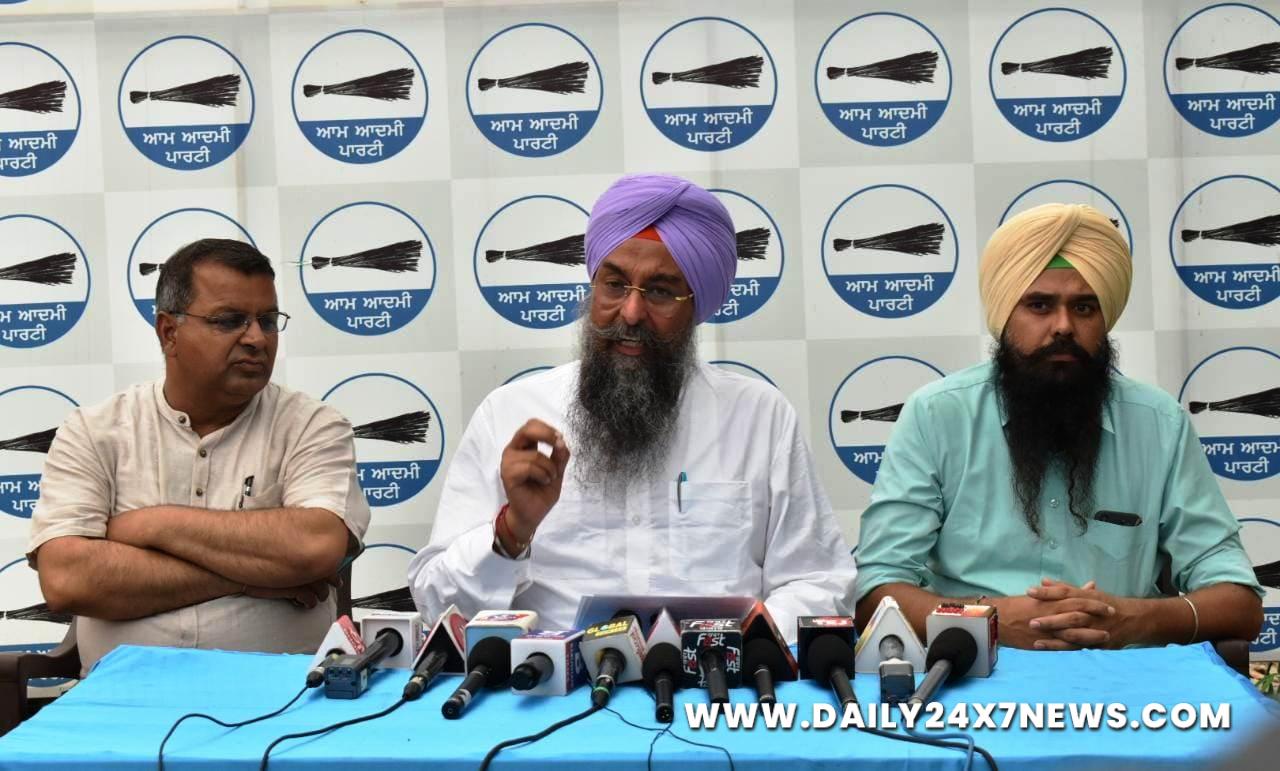 Chandigarh : Strongly condemning the Narendra Modi-led central government for erasing the legacy of the war of independence ‘Jallianwala Bagh’ in the name of renovation, the Aam Aadmi Party (AAP) Punjab senior leader and MLA Kultar Singh Sandhwan termed it as tampering with the history of Punjab. The party also demanded from the Punjab Chief Minister Captain Amarinder Singh to form an all party committee of the MLAs on the Jallianwala Bagh controversy to complete the inquiry within a month and submit the report to the Assembly. Kultar Singh Sandhwan was addressing a press conference at the party headquarters here on Wednesday in the presence of party spokespersons Neel Garg and Malvinder Singh Kang.Kultar Singh Sandhwan said, “The blood of freedom fighters was shed in Jallianwala Bagh and the soil here is a symbol of pride and independence. While this soil is reminiscent of the freedom fighters, it also tells of the betrayals of the British. That is why this soil has always been the eyesore for a handful of narrow-minded, divisive forces and foreign-minded people.”He further said that the Jallianwala Bagh has been renovated by the Narendra Modi government which has been accused by the residents of Amritsar and the historians of tarnishing the historic appearance of Jallianwala Bagh. “If this has happened, then it is not only negligence but also a conspiracy to erase the history; especially Punjab history,” added Sandhwan.

He alleged, “The BJP is moving towards changing the history of the country. So far, countless historical sites and heritages in the country have been changed. Under this, the historical appearance of Jallianwala Bagh has also been erased.”Sandhwan further said that Punjabi language was being disrespected by putting Hindi at the top of the billboards at various places in Jallianwala Bagh; which would not be tolerated at any cost. All languages are respected, but the Punjabi language should be given due respect in Punjab, he asserted.Agreeing with the tweet of Congress leader Rahul Gandhi on the issue of Jallianwala Bagh, Kultar Singh Sandhwan said that our history and historical places should not be tampered with; but Punjab Chief Minister Captain Amarinder Singh has belittled his own leader Rahul Gandhi by saying, “I don’t know what has been removed. To me it looks very nice.”Kultar Singh Sandhwan further said that how did the Chief Minister know while sitting in the farmhouse that everything was fine? He said like the Badals, Captain Amarinder Singh was also a puppet of Prime Minister Narendra Modi. Sandhwan said that although the Congress had not spared any effort to tarnish the image of Punjab; but here Captain Amarinder Singh should not show Modi devotion. He demanded from the Punjab government to conduct a high level inquiry into the work and Rs 20 crore expenditure of a private Gujarat company renovating Jallianwala Bagh and the responsibility of investigation should be given to the committee members constituted by the assembly.