Not A Single Penny’s Investment Through Channi’s Investor’s Tamasha ” Total Investment In Punjab During Amarinder And Channi’s Tenures Doesn’t Equal Even A Single Project By Badal Govt'' : Sukhbir Singh Badal 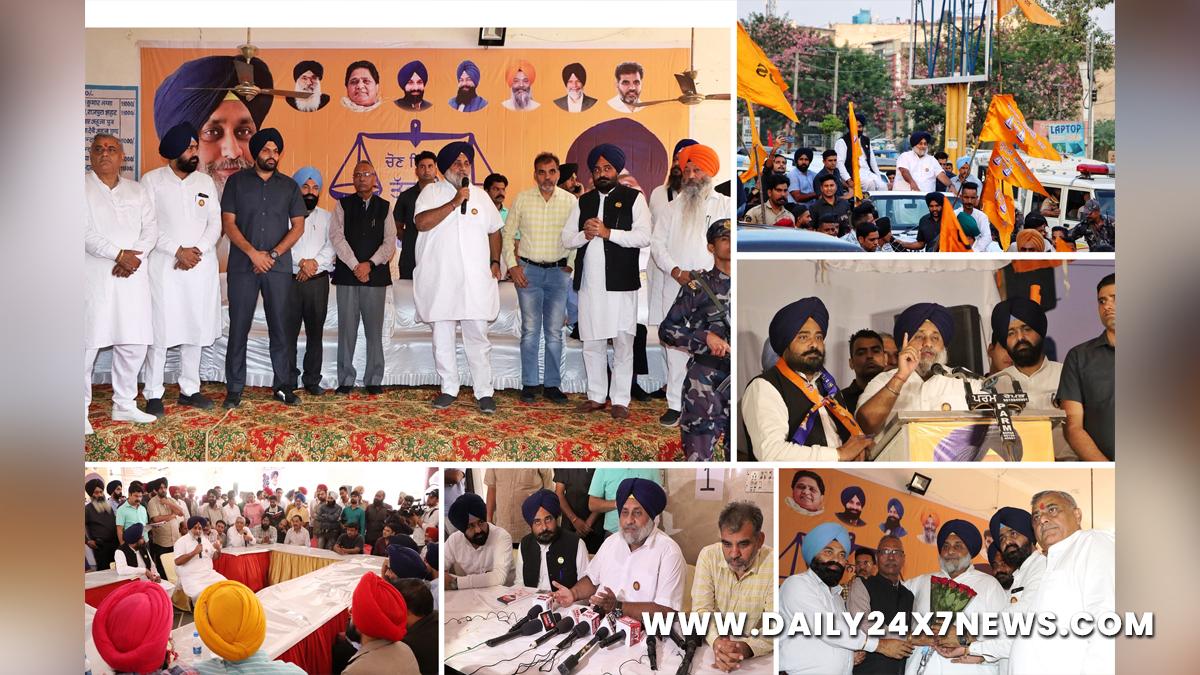 Rajpura/Patiala : Shiromani Akali Dal (SAD) president Sukhbir Singh Badal today declared that his party “ will move a resolution in Vidhan Sabha to ensure that the House directs the Punjab cabinet to use the state machinery, including the civil and police machinery, to physically block the implementation of the centre’s Black Laws on agriculture and stop the BSF from usurping the constitutional authority of the Punjab Police.” “We want a directive from the House, not an ineffective resolution. We will seek a House directive also to categorically put the onus for implementation of its decision on CM Charanjit Singh Channi,” declared Mr Badal while addressing media persons during his hectic mass contact programme at Rajpura where Mr Charanjit Singh Brar is the party candidate.Mr Badal said the manner in which Capt Amarinder Singh justified the central move to increase the jurisdiction of the BSF today, proved that the Punjab Congress had colluded with the centre to make this move possible. “Such moves cannot take place in a matter of days. It is obvious that it was discussed earlier under Capt Amarinder Singh’s government. Present chief minister Charanjit Channi was part of the cabinet and also privy to the move. He should not shed crocodile tears on this issue now”.Mr Badal also asked the Chief Minister to share with Punjabis the details of how many crores of people’s hard earned money is burnt away everyday through government advertisements to market his fake image of ‘simplicity and poverty.’ “Punjabis have never seen one man’s poverty and simplicity costing the people so heavy. The money of the poor and the unemployed is being cruelly wasted on projecting a rich man as poor,” said Mr Badal, adding that he cannot recall another example of such hypocrisy in human history.

Dismissing CM Channi’s ‘loud claims on investments in Punjab’, Mr Badal challenged the Chief Minister to put on official website the detail of even a single crores’ or penny’s worth of investment actually made in Punjab as a result of his investor’s ‘jamboorie’. “ All the investments during Channi’s or Captain Amaridner Singh’s tenures put together do not equal the investment on any single project brought by the Parkash Singh Badal led government. “You talk about 22000 croes Shri guru Gobind Singh Refinery or International Airport or the four and six lan expressways or even relatively smaller projects like AIIMS Bathinda and the Congress cannot name even a single project in nearly ten years of Amarider and Channi tenures to match any of these projects”.Interacting with small industrialists, SAD president said the government would cut red tapism and smoothen the process to establish industry in the state. “The department Invest Punjab which we created in our government has now become Disinvest Punjab, but I assure the industrialists to bring it back on track” Mr Bada said.Earlier the SAD President accompanied by party candidate Charanjit Singh Brar paid obeisance at Lord Shiva’s temple at Nalas village. He also met industrialists and assured to redress their grievances on forming the government. During his interaction with members of district bar association, he assured to continue working for the welfare of the lawyers. He also paid tribute to Dr B R Ambedkar at ITI chowk and expressed his concern over the statue being vandalised repeatedly. He announced the SAD-BSP government would deal with such elements with iron hand.The SAD president also held a detailed interaction with members of different associations of Rajpura, where people raised the issue of canal water shortage and lawlessness prevailing in the constituency. They also blamed local MLA Hardayal Singh Kamboj of patronizing illegal activities. Responding to that, the SAD president assured to get the misdeeds of the mla investigated. He also assured legal action against the mla him for running an illicit distilleryThe SAD president received a warm reception from hundreds of motorcycle-borne activists of SOI.Among others, Prem Singh Chandumajra and NK Sharma were prominent leaders who accompanied him during the visit.