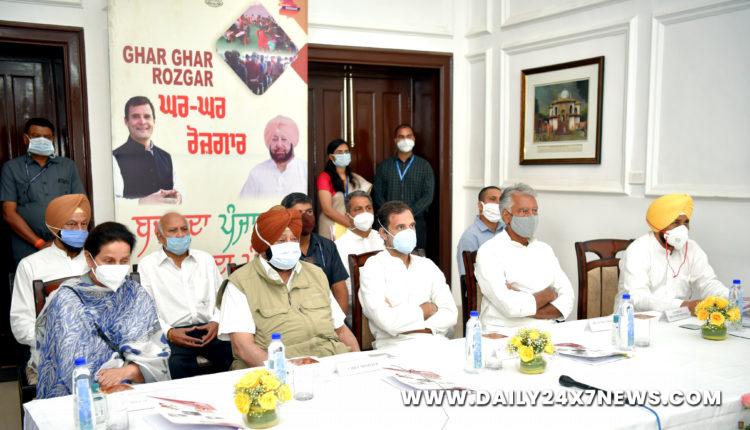 Patiala : Punjab Chief Minister Captain Amarinder Singh on Tuesday announced that his government will soon introduce a new scholarship scheme for Scheduled Caste (SC) students, who had been backstabbed by the central government, which had abruptly ended the post- matric scholarship scheme for them.The Chief Minister said the new scheme would give an opportunity to students of weaker sections to pursue higher learning in various streams, which they had been deprived of due to withdrawal of the scholarship scheme by the Government of India. He said the state government was in the process of recasting this scheme with the aim of ensuring that no SC student is deprived of higher education.The Chief Minister also reiterated his government’s resolve to recruit 1 lakh youth in government jobs over next one and half year, of which 50,000 will be recruited till March, 2021, and another 50,000 by the end of its term.He was addressing a virtual programme on the culmination of the 6th State Level Mega Rozgar Mela from Patiala, along with Congress leader Rahul Gandhi, whom the Chief Minister thanked for his vision to include the state government’s flagship programme for employment generation – ‘Ghar Ghar Rozgar and Karobar’ – in the party’s manifesto during the 2017 Assembly elections.Captain Amarinder noted with satisfaction that his government had, in the past 3.5 years, successfully created job opportunities for 13.42 lakh youth through placement and self-employment assistance under the scheme. Of these, 50,000 government and 4.04 lakh private jobs had been given to the youth, besides facilitating nearly 8.80 lakh youth in taking up self- employment ventures, he said.The Chief Minister apprised Rahul Gandhi that eminent multinational corporates like Microsoft, and other private companies of India, including Trident, Guru Gobind Singh Refinery (HPCL-Mittal Energy Ltd.), Bathinda, had played a pivotal role in offering remunerative jobs to Punjab’s youth.Complementing the visionary leadership of Captain Amarinder Singh in facilitating gainful employment for youth through this unique scheme, Rahul said it was the duty of any government to provide job opportunities for youngsters. Terming youth as assets, he said employment opportunities for them could transform their destinies and lead to the nation’s development, and failure to do so would end in tragedy. He described Punjab as a frontrunner state, with a hardworking, peaceful and resilient workforce committed to upholding the basic values of humanity.Pointing out that Punjab had once led the country in SME sector, despite being a predominantly agrarian economy, Rahul said the previous Akali-BJP government in the state had decimated the same, just as they were now trying to ruin agriculture.
However, under the incumbent government, Punjab continues to nurture its cottage small and micro industrial units, which have an enormous potential to grow and result in job creation, he said. He noted that even Microsoft started its journey as a small company, and these small Punjab units would also grow into large companies under the nurturance of the innovative and hardworking youth.Rahul Gandhi emphasized the need to create a perfect synergy between agriculture and industry to ensure balanced economic growth in the country. He said instead of bringing the draconian agricultural laws, the Centre should have helped the farmers by creating an excellent infrastructure and system to ensure holistic growth of agriculture. They should have focused on the welfare of the farmers by providing them a well-knit network of Mandis and silos for scientific storage of foodgrains, he added.Meanwhile, Sonia Sehgal, Country Head of Microsoft, Chairman-cum-Managing Director of Trident Group Rajinder Gupta and Prabhdass, CEO of HPCL-Mittal Energy Ltd. (HMEL) shared their experiences with Punjab government for partnering in providing livelihood opportunities to the unemployed youth. Prabhdass said that HMEL, through its funded programme, is imparting online training to 50,000 youth for employment in Central and State Government jobs.Appreciating the initiative of Chairman-cum-Managing Director Rajinder Gupta of Trident Group to start a special residential training programme for 2500 girls at Barnala, Captain Amarinder Singh said that this endeavour would certainly go a long way in empowering girls by helping them secure gainful employment. On the occasion, two youngsters – Amandeep Kaur and Sahil Sharma – interacted with the Chief Minister and shared their experience of getting jobs through 6th State Level Mega Rozgar Mela held across the state from September 24-30. Amandeep Kaur, Post Graduate in Fashion Technology, has been appointed as Art & Craft teacher in a leading private school at Patran, and Sahil Sharma, BTech in Mechanical Engineering, got a job at Tech Mahindra.Earlier in his welcome address, Technical Education & Employment Generation Minister Charanjit Singh Channi said that during the 6th State Level Mega Rozgar Mela, 1.43 lakh private sector jobs were offered and 93,593 job seekers had been placed. As many as 9.5 lakh job seekers have been registered with the ‘Ghar Ghar Rozgar’ portal. Channi further said that the Punjab Government would organize mega job loan melas from October 15, 2020 to December 15, 2020 to facilitate youth by giving loans for self-employment ventures.AICC General Secretary & Incharge Punjab Affairs Harish Rawat, Cabinet Ministers Brahm Mohindra, Rana Gurmit Singh Sodhi and Vijay Inder Singla, President PPCC Sunil Jakhar, Member Parliament from Patiala Perneet Kaur, were among those present on the occasion.

Policy for providing maximum relief to industrialists & businessmen/traders to…