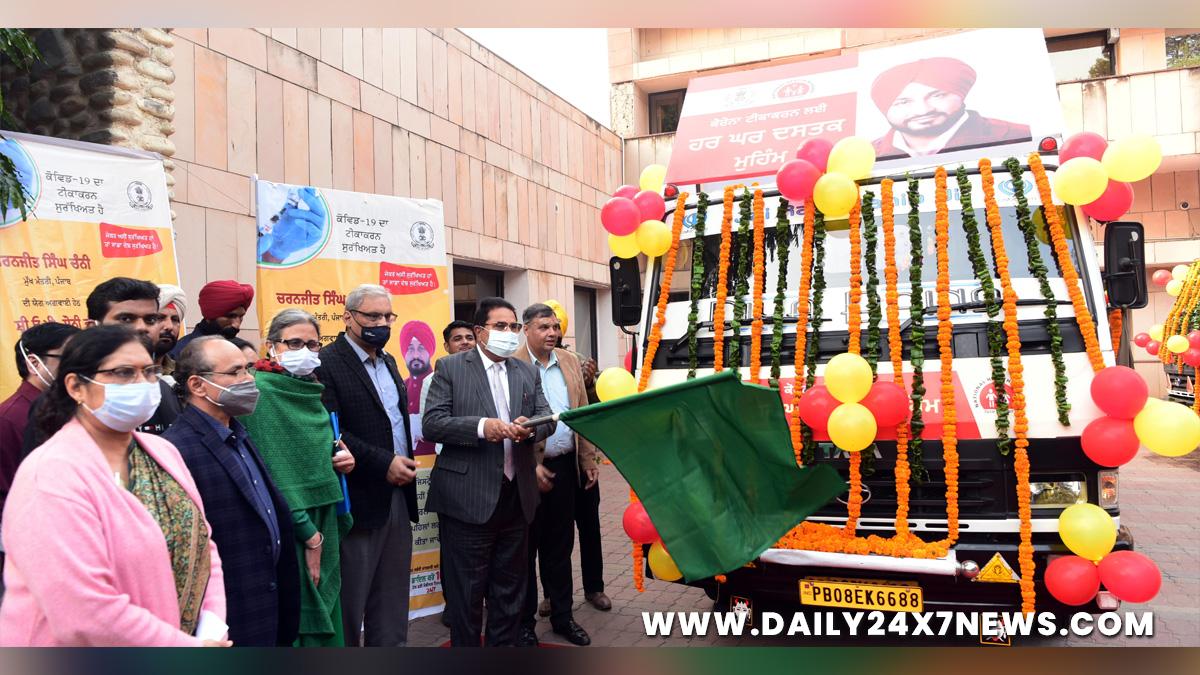 Chandigarh : In view of the current Omicron threat as well as to ward off any possibility of third wave of covid, Deputy Chief Minister O.P. Soni who also holds the charge of Health and Family Welfare Ministry, flagged off five Awareness Vans from Punjab Bhawan Chandigarh to ensure hundred percent vaccination in Punjab. This awareness campaign assumes greater significance as the threat of an imminent third wave is looming large and vaccination is the only permanent way to save people from the wrath of covid.Referring to the ongoing vaccination drive Mr. O.P. Soni stated that approximately 1.66 Crore (80 46%) persons have received their first dose and 79 lakh have been administered both the doses. To give a further boost to the campaign and with the objective of reaching every household, “Har Ghar Dastak” Covid- 19 inoculation campaign was launched in the State during first week of November.

Under this campaign, 312570 and 412912 beneficiaries have been vaccinated for the first and second dose respectively. 100% vaccination has been achieved in 4788 villages for 1″ dose and 1145 villages for the second dose respectively. To further substantiate the ongoing campaign, these IEC ( Information Education Communication) vans will be utilised to create awareness amongst the low performing districts (Ferozepur, Mansa, Barnala, Bathinda, Sangrur) for first 15 days.Where the resistance to vaccination as well as vaccine hesitancy will be removed by way of awareness generation through these vans.Block Extension Educators of Health department’s Mass Education and Media Wing will be deputed to carry out this awareness drive in the rural areas of Punjab. It is pertinent to mention here that awareness Vans flagged off today will create awareness among the general public during this campaign. These awareness vans will move from village to village for the next one month to create awareness about this campaign, so that hundred percent vaccine coverage can be achieved. Subsequently other districts will also be covered across the state. Department’s target is to achieve 100 % first dose and pending second dose coverage by end of December2021.On this occasion Health Secretary Vikas Garg and Mission Director N.H.M. Kumar Rahul were also present.