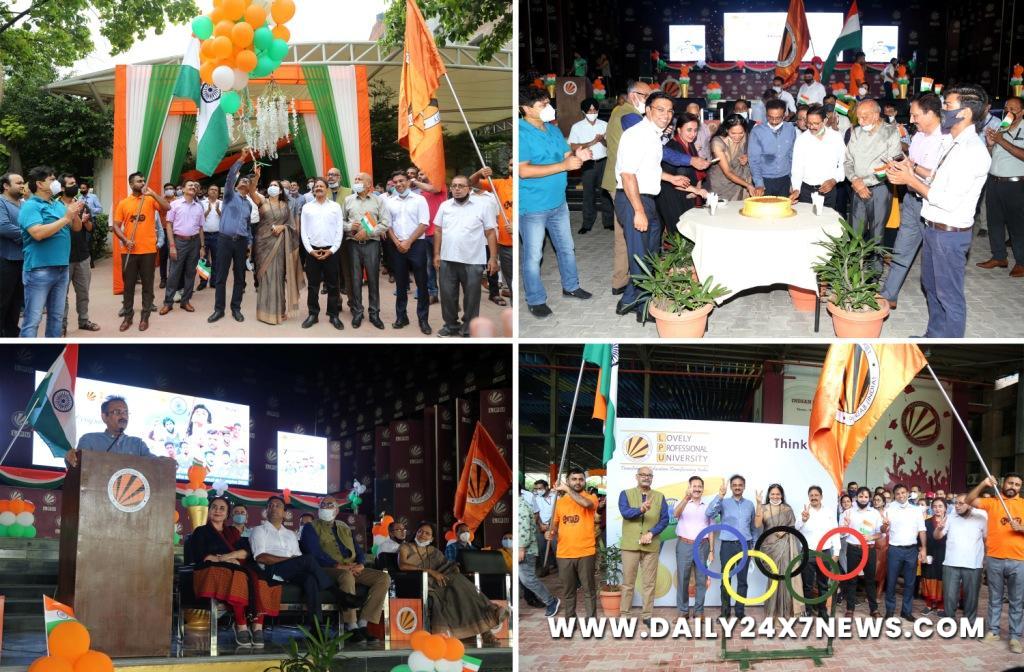 Jalandhar : Lovely Professional University (LPU) will gift INR 50 lacs to Olympic champion Neeraj Chopra, who is pursuing his Bachelors in Arts (B.A.) from the university. Neeraj has made billions of Indians proud by winning Gold in the Javelin throw event at Tokyo Olympics 2020. The University will also reward its wrestler student Bajrang Punia with Rs. 10 lacs for winning the Bronze Medal in the men’s freestyle 65 kg wrestling category. Bajrang, who is pursuing his MA in Public Administration from LPU, beat his rival Daulet Niyazbekov of Kazakhstan to clinch an 8-0 victory at the Tokyo Olympics 2020. The university has already announced a reward of Rs. 70 lakh for its seven hockey players of the Indian team which won an Olympic medal after a wide gap of 41 years.Olympic champion Neeraj Chopra led the scoreboard in the Javelin throw event with an effort of 87.03 on his first attempt, 87.58 on his second and 76.79 on his third. Neeraj’s victory is one for the ages as this makes him the first ever Indian athlete in the history of free India to win a medal in a track and field event at the Olympics. He now joins ace shooter Abhinav Bindra in the esteemed club of Indians who have won an individual Gold at the Olympics.Mr. Ashok Mittal, Chancellor, Lovely Professional University said, “Neeraj has made the entire country proud by winning the first ever medal for India in a track and field event in Olympics. With his performance, he has ended a 100+ year drought and showed that Indian athletes can outperform anyone on the world stage with proper training and effort. His effort will make millions of Indians dream to become an athlete and will bring about a sports revolution in the country.

The same is true for Bajrang Punia and our men in blue in the Hockey Team as well. We are extremely proud and fortunate to count them as our students and look forward to welcoming these brave hearts back to the campus.”Overall, eleven students from Lovely Professional University (LPU), represented the nation at the ongoing Tokyo Olympics in wrestling, hockey, athletics and Paralympics. Out of these, 9 have won medals for India. While seven of them were a part of the men’s Indian Hockey Team, Neeraj Chopra and Bajrang Punia have medals in individual events.In this context, Lovely Professional University (LPU) rejoiced India’s historic Tokyo Olympics-2020 achievements and illustrious contribution of its eleven (11) participating students to the games thereof at its campus. During massive celebrations for glorious wins for India and LPU, LPU Chancellor Mr Ashok Mittal, Vice Chairman Mr Naresh Mittal, Pro Chancellor Mrs Rashmi Mittal, DG HR Singla and all other ranks gathered along with students and staff members at SBRM Unipolis of the University. While addressing all, Chancellor Mr Mittal shared: “LPU students have made India & LPU proud.” Mr Mittal also shared the momentous victorious moments of the athletes through videos and informed that LPU’s commitment made a few years ago to send its students to Olympics has been fulfilled and that too with significant wins so soon. He also informed that presently LPU is awaiting the return of the winners at the campus, where they will be duly honoured with cash rewards of Rupees 1.3 Crores, as announced earlier. More merriment and rejoicing will be held at the campus amid their esteemed presence.

Captain government should try to maintain peace and harmony in Punjab : Raghav Chadha