LPU rewards 13 of its students who won Olympic Medals including Neeraj Chopra with INR 1.75 Crores 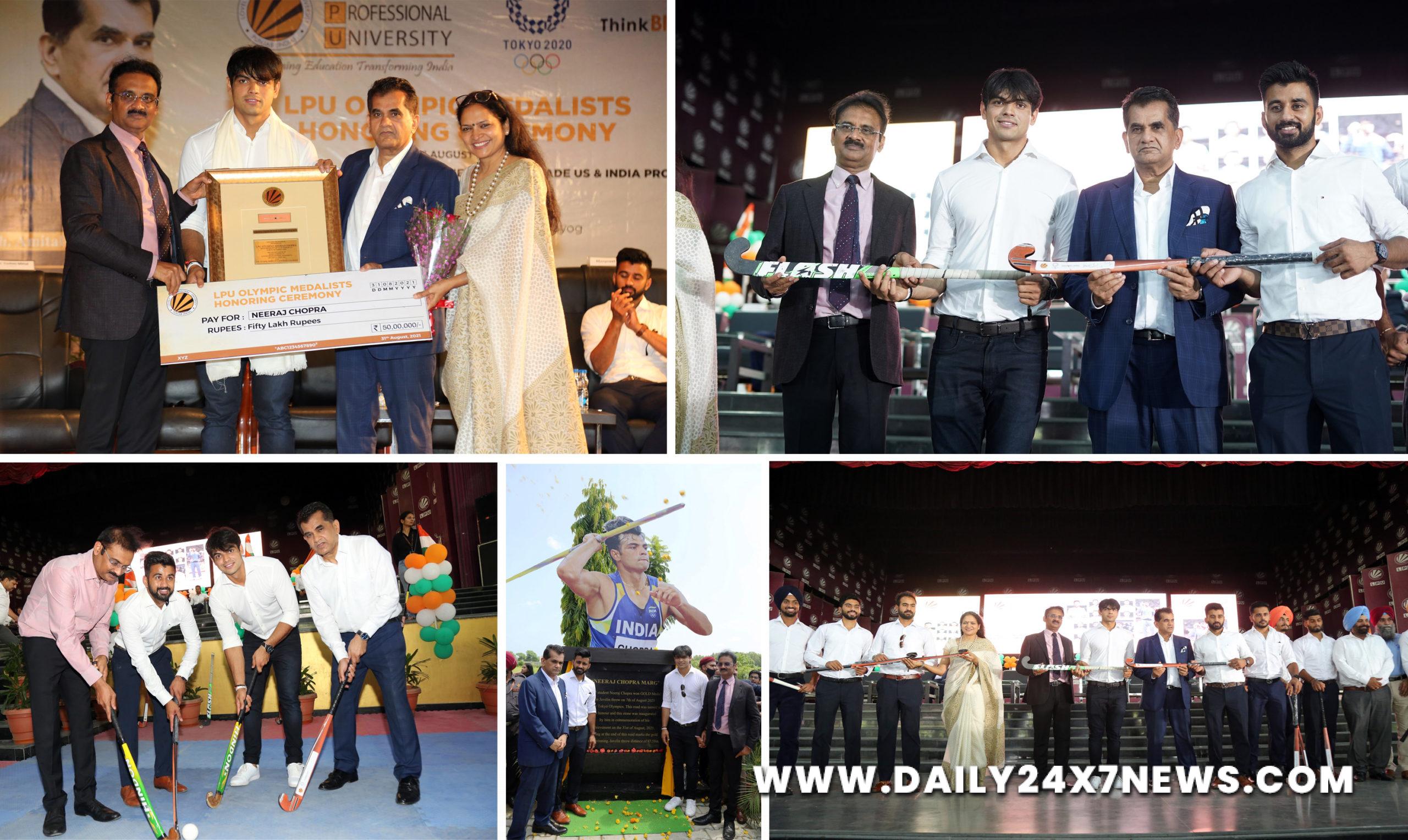 Jalandhar : Lovely Professional University (LPU) today felicitated 13 of its students including Neeraj Chopra and ten members of Indian Men’s Hockey Team for making India proud at the Tokyo Olympics 2020. While Neeraj Chopra was awarded Rs. 50 lakhs and a ‘Gold Javelin’ for winning the only Gold for India at Tokyo Olympics 2020, Manpreet Singh and nine other members of the Hockey Team received Rs 85 Lakhs. The gala ‘Honoring Ceremony’ was held at LPU campus today to celebrate the return of its Olympic Champions to their alma mater with the CEO of NITI Aayog, Shri Amitabh Kant as the Chief Guest.The university also announced a reward of Rs. 10 lakh for Bronze medal winner Bajrang Punia and a reward of Rs. 25 Lakhs for Paralympics High Jump Silver medal winner Nishad Kumar; both of whom are students of the university.To commemorate Neeraj’s Gold medal winning throw, the University also unveiled a special 87.58-metre ‘Neeraj Chopra Marg’, a pathway leading to LPU’s sprawling sports complex which offers world class sports infrastructure. The distance of the road is same as Neeraj’s winning Olympics throw. The University made a unique record this year with 14 of its students representing India at Tokyo Olympics 2020 in Wrestling, Hockey, Athletics (javelin throw and sprinting) and the Paralympics. 13 out of these 14 made India proud by winning an Olympic medal.Shri Amitabh Kant, CEO, NITI Aayog said, “I would like to take this moment to congratulate India’s Olympic Champions and their alma mater, LPU. They have brought joy and hope to millions of Indians. It is commendable to see the efforts that the university has put behind sports.” He further added, “Sports is extremely important for the all-rounded development of an individual. Students who do well in sports fare much better in life compared to those who only focus on studies. I wish my kids become sportsmen and not IAS officers. We would be able to bring much more medals to India when all of us start thinking like this.”

Neeraj Chopra said, “It is a proud feeling to come back to one’s alma mater after winning the Gold Medal at the Olympics. LPU and my faculty have supported me in every way possible to help achieve my dream of winning an Olympic Gold for India. I am confident that the University will produce many more top-quality sportspersons who will win international laurels for India in the future.”Mr. Ashok Mittal, Chancellor, Lovely Professional University said, “We are proud beyond words to have thirteen of our students including Neeraj, the men’s hockey team members and Bajrang win medals at the Tokyo Olympics 2020. They have made the whole nation proud with their achievements and their feat will motivate millions of youngsters across the country to believe in their ability and win more medals for India in the future. It is a moment of great joy for us to welcome them back to their alma mater and celebrate their achievements. LPU has been making extensive efforts over the last few years to promote sporting talent in the country which has resulted in several of our students’ winning medals at national and international competitions over the years.”.The ceremony also saw interesting moments where the members of the Indian Hockey Team played a short commemorative hockey match along with Neeraj Chopra. Post the match, Neeraj also demonstrated the Javelin throwing technique to the members of the Indian Hockey Team. Neeraj also signed on a Javelin and presented it LPU as memorabilia. The members of the Indian Hockey Team presented a Hockey Stick with their signatures on it to the University. The members of the Hockey Team who are LPU students include Captain Manpreet Singh (MBA), Rupinderpal Singh (MBA), Harmanpreet Singh (MBA), Mandeep Singh (BA), Shamsher Singh (MBA), Dilpreet Singh (BA), Varun Kumar (MBA), Gurjant Singh (MA. History) , Hardik Singh (MA) and Simranjeet Singh (MBA).