Were Pumping Heroin Into Punjab And Haryana Since Long 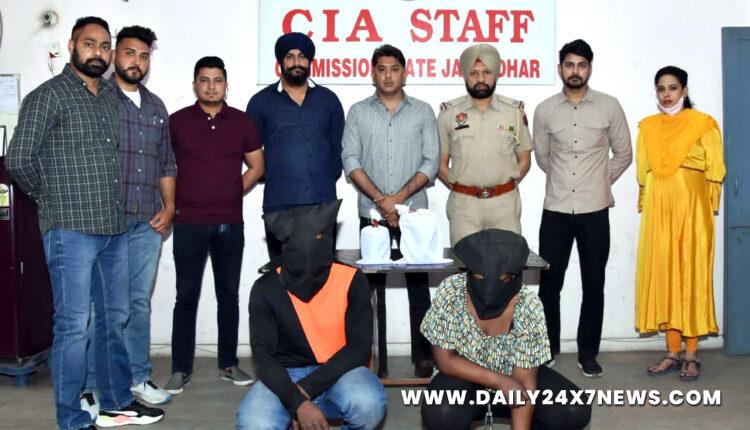 Jalandhar : The Jalandhar Commissionerate Police today busted an international drug racket with the arrest two African origin smugglers and recovery of one kilogram 500 grams of Heroin from them.Divulging the details, Commissioner of Police Jalandhar Gurpreet Singh Bhullar said that on a tip off the CIA staff I of Jalandhar Commissionerate Police had organized special checking GT Road near Paragpur. He said that the team of CIA staff I noticed African origin male and female coming on service with a bag. However, Mr. Bhullar said that after noticing the Police both the African origin nationalists, identified as Okafor Paul Chukwunwekein s/o Ubah r/o 12 Nawfia Street Omagba Phase II, Onithsa Ananbra State Nigeria with present address Uttam Nagar East, New Delhi and Mary Nyambura d/o Wanjru r/o Naivasha Kenya with present address M block Mohan Garden New Delhi, turned back.The Commissioner of Police said on suspicion, the Police party intercepted both the African origin nationalists and started investigation. He said that during the checking of both the African origin smugglers one kilo 200 gram heroin was recovered from Okafor Paul Chukwunwekein and 300 gram heroin was recovered from Mary Nyambura. Mr. Bhullar said that a case under section 21/61/85 NDPS Act has been filed at Jalandhar Cantt Police station.The Commissioner of Police said that during the investigation Okafor Paul Chukwunwekein has admitted that he along with other African co-nationals was smuggling the drug into Punjab and Haryana. Likewise, he said that Mary Nyambura has also revealed that she was into the trade since long with Okafor and was minting huge money. Mr. Bhullar said that further investigation into the case was going on to trace further links in the racket.