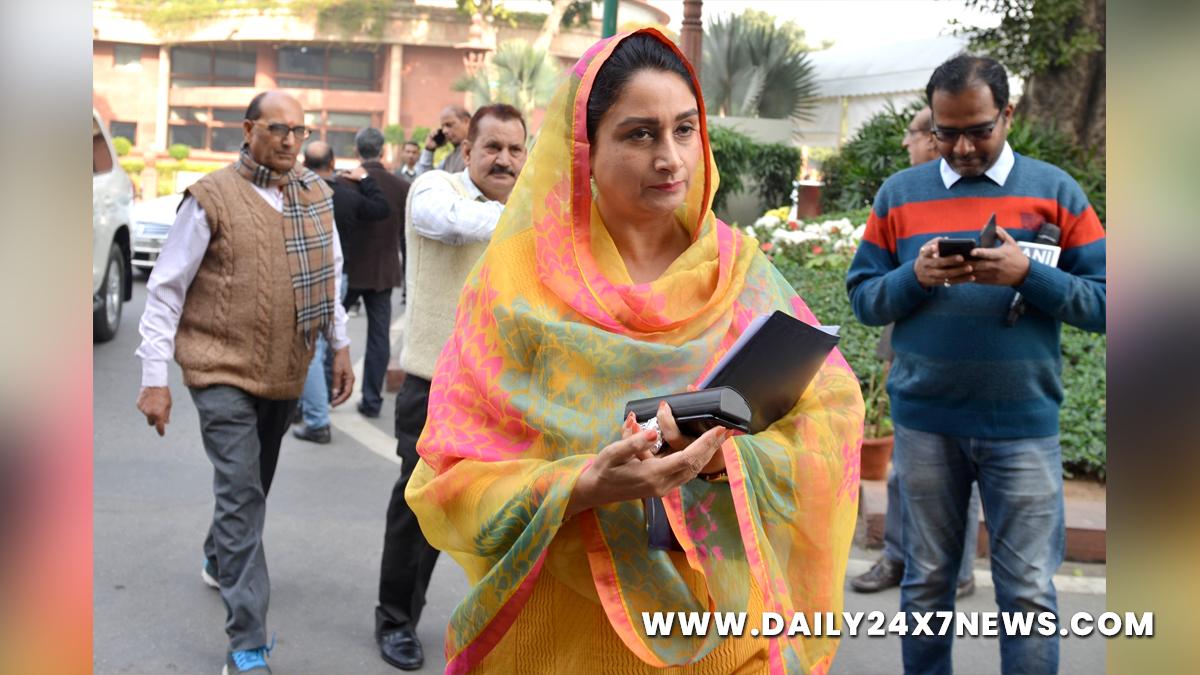 Chandigarh : Calling for reopening of the Kartarpur Sahib Corridor in Pakistan, former Union Minister Harsimrat Kaur Badal on Wednesday urged Prime Minister Narendra Modi to personally intervene to “open the proposal for a land swap between India and Pakistan for merger of the holy shrine at Kartarpur Sahib with India in exchange for a suitable chunk of land elsewhere on the lines of the Hussainiwala village exchange.She urged the Prime Minister to take the diplomatic initiative for the creation of a “Permanent Peace Corridor” to link all multi-faith sacred shrines left in Pakistan with the Indo-Pak border.Among other things, she said this would be “the first step towards the eventual fulfilment of the sacred Sikh prayer for ‘khulle darshan deedare te seva sambhal (unhindered access and the right to perform service of the Guru)’ of all the sacred shrines which were weaned away from the devout Sikh masses in 1947″.In her two-page letter to the Prime Minister, Harsimrat Kaur recalled that the proposal for the land swap to merge Kartarpur Sahib with India was first mooted by the Shiromani Akali Dal (SAD) in 1948.”In fact, in 1969, the then Prime Minister of India agreed to formally approach the government of Pakistan for this exchange of land on the pattern that the two countries had earlier followed in the Ferozepur sector with regard to the martyrdom place of Shaheed-e-Azam Sardar Bhagat Singh ji as well as between India and Bangladesh with regard to the Farakka dam,” she said.

Harsimrat Kaur said the proposal had sadly been shot down by both the Pakistan government and, strangely, by the then Congress government in Punjab.She said the issue came up for discussion again during former Prime Minister Atal Bihari Vajpayee’s famous Lahore bus trip and his meetings with his Pakistan counterpart, Nawaz Sharif.”This was at the behest of the then Punjab Chief Minister Parkash Singh Badal,” she said.Harsimrat Kaur also lauded the sacrifices and contributions made by Akali stalwart late Jathedar Kuldip Singh Wadala, “who for decades organised protest and awareness candle marches on Indo-Pak border near Kartarpur Sahib”.Reminding Modi of how it finally fell to his initiative to expedite the completion and the opening of the historic Kartarpur Sahib Corridor, she said this would “go down as one of your most iconic contributions to peace and understanding in the world”.She also referred to Modi’s comparison of opening of the Kartarpur Corridor with the pulling down of the Berlin Wall, but added, “While the Berlin Wall in Germany stays demolished, the Berlin Wall for the Sikhs still persists on the Indo-Pak border.”She urged the Prime Minister to personally intervene to get the Kartarpur Sahib Corridor reopened.