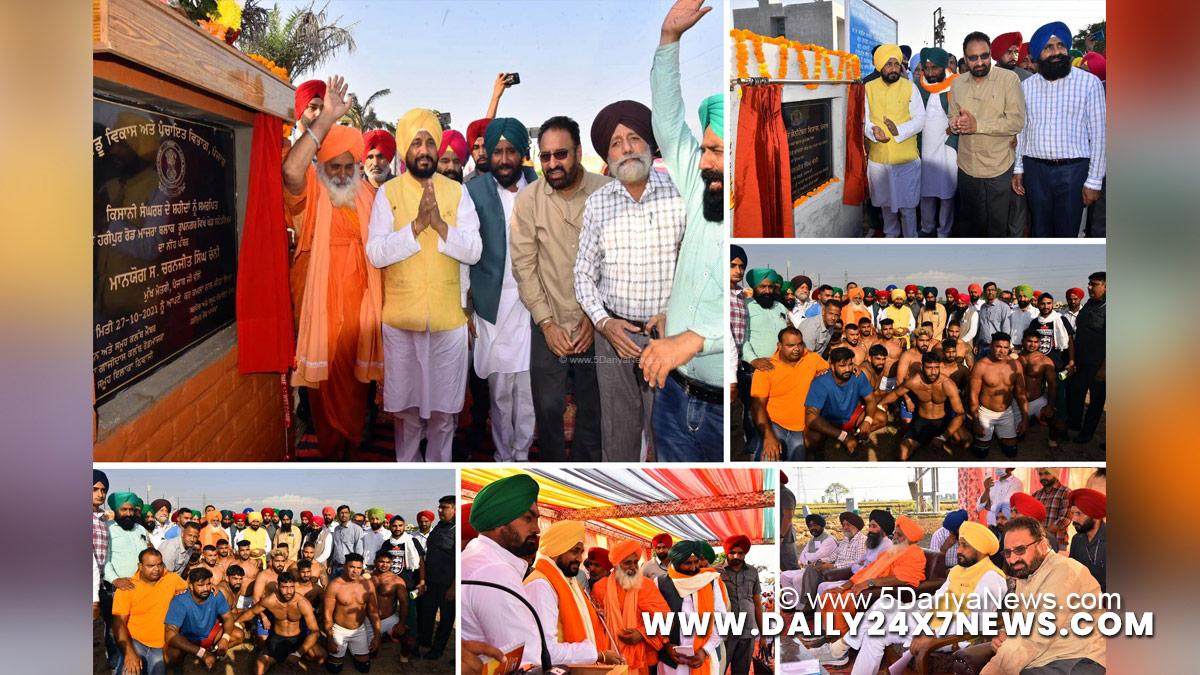 Rupnagar : Chief Minister Charanjit Singh Channi today laid foundation stone of Sports Stadium at Village Roadmajra in Sri Chamkaur Sahib Constituency in the presence of renowned environmentalist Baba Balbir Singh Seechewal. The Sports stadium will be built in the memory of farmers who lost their lives during Farmers agitation for scrapping three black laws imposed by the BJP led centre government. The Chief Minister also gave a grant of Rs one crore for building the stadium in the memory of farmers. Chief Minister Mr. Channi also inaugurated the water tank constructed at a cost of Rs. 45.81 lakh to supply clean drinking water to the residents of villages Rodmajra and Chaklan.Speaking on the occasion the Chief Minister said that this sports stadium which is being built by the state government will be a real tribute to the farmers who had lost their lives in the agitation against black laws.The Chief Minister said that as per the unanimous decision taken during the all party meeting, the Punjab Government would convene a special session of the Punjab Vidhan Sabha on November 8 to unanimously reject the three black farmer laws imposed by the Union Government.
Mr. Channi further said that to keep the people of the state healthy, beautiful parks will be made in all the cities and sports stadiums were being set up in the cities and villages. ‘Besides this he said that Gym Equipment and Sports Kits were also being distributed to sports clubs to motivate the youth towards sports.Chief Minister also said that 16 new sports stadiums are coming up in the Sri Chamkaur Sahib Constituency for which 2.50 Cr. a grant has already been released to start the work for the first phase besides rupees one crore grant to the sports stadium at village Roadmajra.He further said that all the ongoing development projects and proposed projects for Sri Chamkaur Sahib will be completed within set time limits. He also said that the strengthening of Bela-Paniali road connecting 344-A would give a big boost to the economic development of the area and work for construction of Rs 114 crore bridge on river Satluj has already begun.

Why Rajkummar Rao is spooked by Archana Puran Singh