Dedicates To The People All Rs. 77 Cr Worth Projects Taken Up In 63 Villages & 14 Towns Visited By Sri Guru Nanak Dev Ji 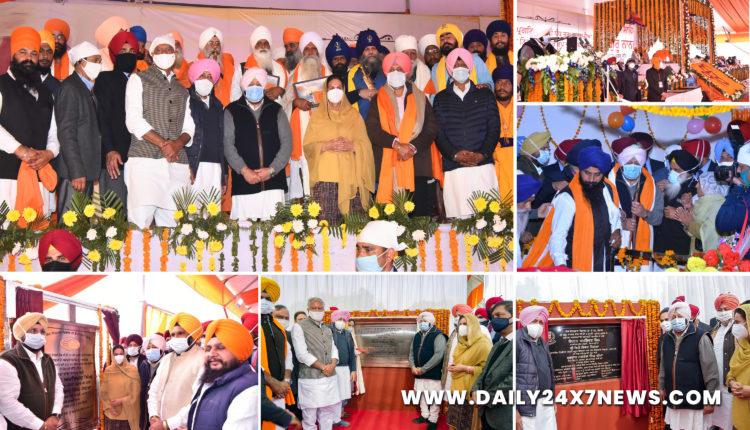 Sultanpur Lodhi/Dera Baba Nanak : Taking development of the holy city to new heights, Punjab Chief Minister Captain Amarinder Singh on Monday laid foundation stones of six projects, to be completed at a cost of nearly Rs. 40.75 crore, in Sultanpur Lodhi. After attending the function on closing ceremony of 550th Prakash Purb celebrations of Sri Guru Nanak Dev Ji here, Captain Amarinder Singh laid the foundations stones of the conservation of Qila Sarai Project at a cost of Rs. 6.5 crore, Grid Tied Roof Top Solar Power Plant at Government Senior Secondary School at a cost of Rs. 1.25 crore, Smart School for Rs. 9.5 crore, Sewerage Treatment Plant worth Rs. 20 crore, Sub Division Administrative Complex at a cost of Rs. 3 crore and Five Smart Aanganwari Centres at a cost of Rs. 45 Lakh.Listing some other projects that had been announced and completed at Sultanpur Lodhi during the 550th Prakash Purb, the Chief Minister said that the beautification of the holy Kali Bein was done at a cost of Rs. 10.8 crore, while Guru Nanak Dev ji Centre for Invention, Innovation, Incubation & Training had been set up at a cost of Rs. 319 crore. The Bebe Nanki College for Girls had been established in this area in this period, he said, adding that the widening and construction of six town roads had been completed at Rs. 30.7 crore, along with upgradation of the Railway Station to facilitate Sangat and other travellers.
In another step to ensure easy movement of devotees and traffic towards Gurudwara Ber Sahib, three high-level bridges have been constructed on the Pavittar Bein at a cost of Rs Rs. 9.30 crore, in addition to two foot over bridges at Pavittar Bein (Rs. 1.4 crore) and two Pontoon Bridges over the Pavittar Bein at Rs. 2 crore. The local rest house has also been developed at a cost of Rs Rs. 2.4 crore, while Rs 6 crore was spent on upgradation of the bus stand, in addition to setting up of 66 KV sub Station at a cost of Rs Rs. 11 crore.Later, at Dera Baba Nanak, another historic town associated with the first Sikh Guru, the Chief Minister Captain Amarinder Singh, accompanied by PPCC President Sunil Jakhar, Cabinet Minister Sukhjinder Singh Randhawa and MP Preneet Kaur, dedicated to the people all projects taken up in the 63 villages and 14 towns visited by Sri Guru Nanak Dev ji (Rs. 77 crore).Besides, the Chief Minister also laid the foundation stone for Heritage Street (Rs. 3 Crore), and Guru Nanak Dev Sugarcane Research and Development Institute, Kalanaur, to come up in 100 acres, as well as Baba Banda Singh Bahadur Museum and Clock Tower (Rs. 80 Lakh).Thanking the Chief Minister for all the development projects including Sugarcane institute, Cabinet Minister Sukhjinder Singh Randhawa said that the institute would prove to be a shot in the arm for the Sugarcane growers. Besides, the heritage street would give fillip to the religious tourism and give facelift to the region.

Akali Dal declared Bibi Brar from Ward No. 41 Jasmine Kaur from WARD NO 49