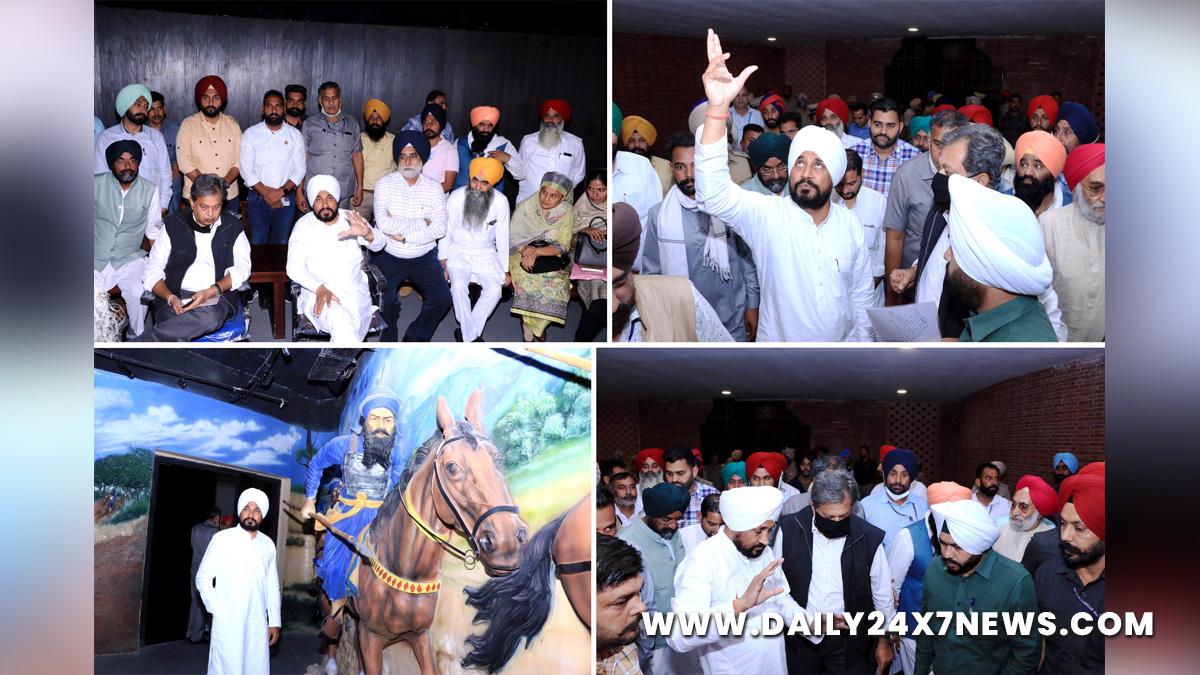 Rupnagar : Chief Minister of Punjab Charanjit Singh Channi’s dream project of beautifying the city of Sri Chamkaur Sahib and building a theme park, to commemorate the glorious life and sacrifices of 10th Sikh Guru Sri Guru Gobind Singh Ji’s eldest sons Baba Ajit Singh and Baba Jujhar Singh, is on verge of completion. Channi as being Minister of Tourism and Cultural Affairs had initiated this project four years ago. A first-of-its-kind Theme Park, a religious and recreational facility of international standards has been constructed with a budget of Rs 55 crore by the state government.To give a final touch to the project, the Chief Minister personally reviewed all films from 8 pm to 12 noon last night and issued directions to the concerned authorities to make necessary changes. Simultaneously, the Chief Minister also directed to plant trees as well as street lights on the road connecting to the theme park.On the occasion, CM said that the theme park would be one of the most astonishing wonders in the world and it would be a centre of attraction for people across the globe. The park has 11 galleries of state-of-the-art techniques to exhibit films including on the Sikh philosophy, the massacre of Sri Chamkaur Sahib, the departure of Sri Guru Gobind Singh Ji from the Sri Anandpur Sahib fort to the separation of Sarsa river, the story of supreme martyrs Chote Sahibzade and Banda Bhahdur’s march towards Punjab and the restoration of the Sikh empire.He said that the Padma Shri Dr Surjit Patar has written all scripts of the project, while the animated films, songs and commentaries depicting glorious Sikh history to be displayed in the galleries have been prepared by renowned studios in Mumbai and Delhi.

First randomisation to deploy manpower for the…

Apart from the country’s famed singers Kailash Kher and Sukhwinder, many other well-known actors have contributed their voices in the films. The project has been completed by an expert technical team that had built the world’s renowned Virasat-e-Khalsa.The first gallery will depict the life of Guru Sahib while the second gallery will show the complete history of Bhai Jaita Ji bringing the head of Guru Tegh Bahadur Sahib. The screen-based third gallery will present the life and history of Sri Guru Gobind Singh Ji to devotees.The Battle of Chamkaur Sahib will be magnificently exhibited in the fourth gallery, which will be watched by the devotees while sitting at the turntable. In the fifth gallery, scrupulous history and separation of Sarsa River associated with Chote Sahibzade will be broadcast to visitors. Likewise, the projection mapping in the sixth gallery will be performed with utmost diligence to narrate the scene of the supreme martyrdom of the Chote Sahibzade.Similarly, the history of Machhiwara associated with Guru Sahib has been narrated in Gallery 7. In the 8th gallery, the facts related to the battle of Muktsar and the Zafarnama written by Guru Gobind Singh ji will be presented to the devote through modern technology.The ninth gallery depicts Guru Sahib’s meeting with Banda Singh Bahadur. While in the tenth gallery Banda Singh Bahadur’s journey from Nanded to Punjab is to be telecasted. In the last and eleventh galleries, Banda Bahadur’s courageous act of valour with the Mughal Empire and restoration of the Sikh empire.The theme park also has two 10-meter-long swords, a water-show with a ‘Khanda’ (Sikh Symbol), which is based on a song and five copper horses being shown as that these are ridden by warriors. A ‘Khanda’ has also been set up in the venue. Meanwhile, the warriors on five copper horses have been specially built by artisans from Bengal.