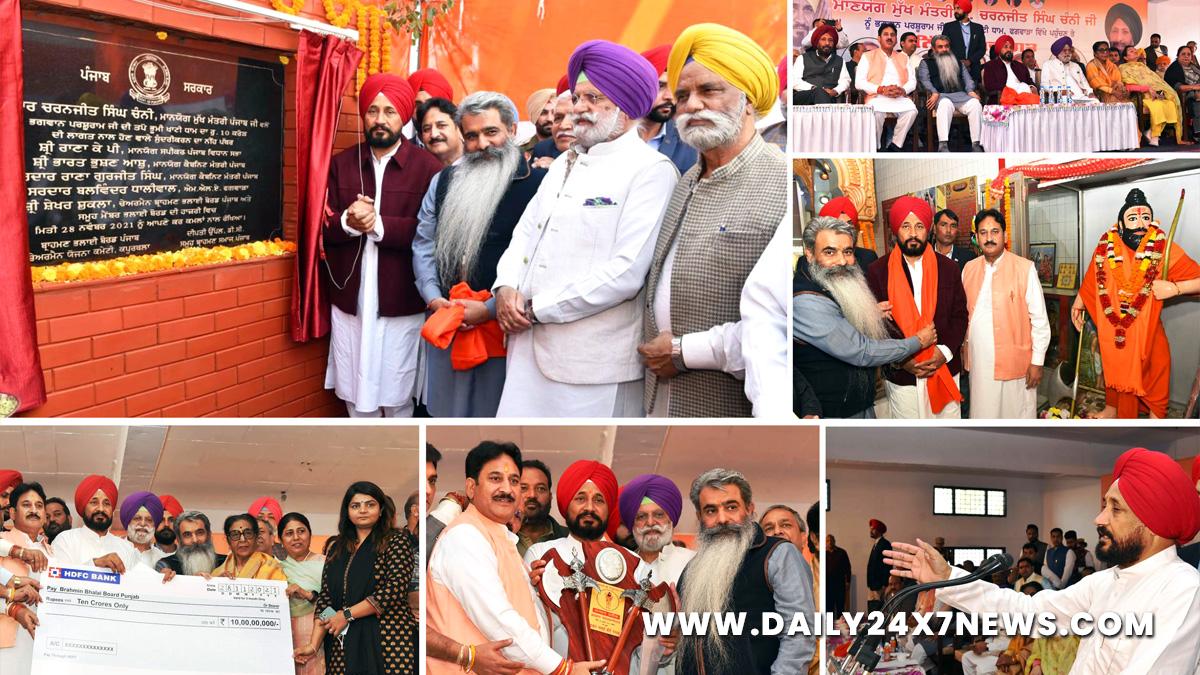 Khati (Phagwara) : Punjab Chief Minister Charanjit Singh Channi today announced to set up an exclusive research centre on three epics of Ramayana, Mahabharat and Srimad Bhagvad Geeta.The Chief Minister, while addressing the gathering after laying foundation stone of state of art Bhagwan Parshuram Taposthal here today, said that this state of the art research centre will showcase the message of these three epics. He said that since ages these epics have been source of life and inspiration for entire humanity adding that this research centre will act as a catalyst for disseminating the message of these epics amongst the masses in simplest form. CM Channi said that the state government is trying to rope in respected Shankaracharya ji for this ambitious project.The Chief Minister further said that the state government will develop the Taposthan of Bhagwan Parshuram ji as a state of the art architectural marvel. He said that cheque of Rs 10 crore has already been handed over the district administration and more funds whenever needed will be sent accordingly. CM Channi also said that RS 75 lakh will be spent on development of place related to Mata Renuka ji, the mother of Lord Parshuram ji.The Chief Minister also said that in order to ensure proper care of the stray cattle in the state, the Brahmin Welfare Board will be entrusted this task. He said that funds will be provided to the board for proper upkeep of the stray cattle. CM Channi said that it is the need of hour to solve this one of the major social problem. Evoking the example of Mahabharat to make a scathing attack on the Akalis, the Chief Minister said that the Kauravas were ruined due to puttar moh (love for son) of King Dhritraashtra. In the same manner he said that Akalis are in shambles due to the love of Akali stalwart Parkash Singh Badal for his son. CM Channi said that Mahabharat is a treatise regarding the statecraft and is still relevant today adding that poor situation of Akali Dal is an example of it.

Slamming Aam Aadmi Party Supremo Mr Arvind Kejriwal for little knowledge about state, Chief Minister said that Delhi Chief Minister is groping in dark for fulfilling his lust of power. He said that besides being an outsider Kejriwal is a rumour monger who knows nothing about state but pokes his nose in every thing. CM Channi said that such type of cheap politics will never be successful in the state.The Chief Minister said that he was fortunate that Congress leadership has bestowed him this service to serve the state. He said that I am working to resolve the issues that are faced by every common man of the state. Listing the several pro-people initiatives taken by his government, he said that Power bill arrears worth Rs. 1500 crore have been waived, Power rates for domestic consumers have been reduced by Rs. 3 per unit, Bills to the tune of Rs. 1200 crore have been waived off in respect of motors in rural areas, water charges brought down to Rs. 50, Rates for sand have been reduced to Rs. 5.50 per cubic feet and Punjab Government is bearing Rs. 35 as part of cost sharing out of increased Rs. 50 of Sugarcane prices while the private mills now only have to bear Rs. 15. CM Channi said that not only this but several other path breaking decisions will be taken in coming days too.Paying tributes to Lord Parshuram ji, the Chief Minister exhorted the people to imbibe the ideals propagated by Bhagwan Parshuram ji, so that justice and equality is ensured in the society. He said that Bhagwan Parshuram ji stood for protecting the basic tenets of religion, truth, universal love, compassion and righteousness. CM Channi said that life and philosophy of Bhagwan Parshuram ji teach us that irrespective of our caste, religion and profession, we should fight injustice with all our might.

The Chief Minister said power to common man was the basic principle of Lord Parshuram Ji’s teachings. He said that now also Lord Parshuram Ram ji guided their destiny to overthrow rule of aristocracy and bring common man’s regime. CM Channi said that he is elated to be here amongst all of you adding that he is fortunate to have blessings on this sacred land. Striking an emotional chord with the Brahmin community, he said that the community has strong ties with him since early days.On the occasion Chief Minister also announced to make a budgetary provision worth Rs 2 crore for Bhagwan Parshuram Chair in Punjabi university. He also announced a grant of RS 21 lakh for village panchayat of Khaati.In his address Cabinet Minister Rana Gurjit Singh said that CM Channi represents the secular ideology of Congress party. He said that CM Channi has taken path breaking initiatives for well being of all the religions and communities. Rana Gurjit Singh also lauded the role of entire Brahmin community in socio economic development of the country.Addressing the gathering Cabinet Minister Mr Bharat Bhushan Ashu said that the state government has provided platform to the community for strengthening the community. Mr Ashu said that he is thankful to the Chief Minister for announcing grant worth Rs 10 crore for development of this historic place. He said that now after the Chief Minister has thought so much for well being of the community, it is moral duty of community to support CM Channi and Congress party in coming days.On the occasion MLAs Mr Balwinder Singh Dhaliwal, former Minister and Chairman Punjab Agro Industries Corporation Mr Joginder Singh Mann, Chairman Punjab Brahmin Welfare Board Mr Shekhar Shukla, President Punjab Mahila Congress Mrs Balbir Rani Sodhi, former Union Minister Mrs Santosh Chaudhary, Chairman Cooperative Bank Mr Harjit Singh Parmar, Chairman Punjab Khadi Industries Board Mrs Mamta Dutta, Chairman Punjab Agro Food-grains Corporation Mrs Geeta Sharma, District coordinator Daljit Singh Raju Darvesh Pind, Acting President District Youth Congress Mr Harnoor Singh Harji Mann and others.