Channi government running away from House to cover up its shortcomings : Harpal Singh Cheema

Said, government's decision, a violation of Constitution and unnecessary burden on exchequer 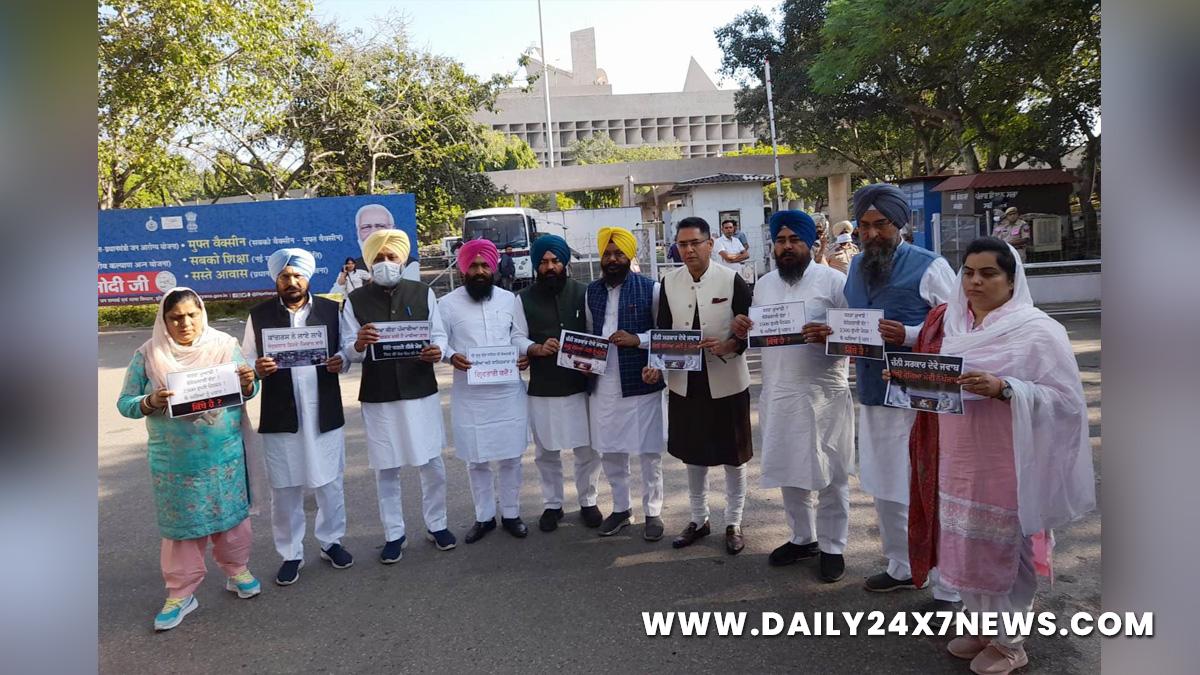 Chandigarh : Opposing the decision of the government to adjourn the House for two-days and calling it on November 11; by holding its only meeting in the Vidhan Sabha on Monday, the Aam Aadmi Party (AAP) Punjab alleged that the government was not only violating the Constitution by taking such ‘Tughlaq decisions’ but was also imposing unnecessary burden on the people’s money (government exchequer).Talking to the media outside after the tribute meeting which ended in a few minutes during the Assembly session, Leader of Opposition, Harpal Singh Cheema and MLA Aman Arora said that the government was running headless. The whole thrust of Chief Minister Charanjit Singh Channi and his Cabinet has been on how to cover up the shortcomings of over four-and-a-half-years of futile rule. That is why the government is running away from the protesters sitting on the streets and the questions of the Opposition in the House.Harpal Singh Cheema said that the Congress party was just hiding its weaknesses and with the drama of the session, was deceiving the people of Punjab. He said that the former Chief Minister had said that the cost of one day of the session comes to Rs 70,000; now due to inflation, it must have increased even more.

The Chief Minister and the Finance Minister should tell who is responsible for this wasteful expenditure? It would have been better if instead of adjourning this session for two days, it would have been extended for a further 15 days. Cheema demanded that the pending monsoon session be called at the earliest for at least 15 days and reiterated the demand for live telecast.Cheema said that the account of the performance of the five years of the Congress government will be asked by the AAP. It will be asked in which ‘deal’ Channi has handed over half of Punjab to Modi and Amit Shah through BSF. Questions will be asked in relation to agricultural loans, Dalits, traders and the PTI teachers sitting on water tanks in Sohana, on towers in Patiala and unemployed sitting on indefinite strike; because the Congress had promised Ghar-Ghar Rozgar.Aman Arora said that this was happening for the first time in the history of 70 years, when the session was going on continuously; but two days’ holiday was given between Tuesday to Thursday. He said that the rules were being kept in abeyance, whereas there should be 40 days of seating in a year but it used to be only 10-11 days. He said that the government had promised to hold a 10-15 days session after the one-day session dedicated to Sri Guru Sahib.
The government now called the session but after ten minutes; put two days off.

This makes it look as if the government has got tired, said Arora. He said that the Congress government was a complete failure and it has no answer to the questions of 3 crore people.He said that the Congress government runs away from public issues and when the infighting of the government does not end; what will it do to solve the issues of the people. Aman Arora said that as a responsible opposition, the AAP will ask the Congress government all the questions of the people. The question will be asked on the increase in the jurisdiction of BSF. Arora raised questions on the duration of the session stating is it the case of BSF alone. Is the case of drugs, sacrilege and debt of three lakh crores ended in Punjab, he questioned. Arora said that the industry was lagging behind, Punjab’s health and education system was also on the verge of marginalization; but the Congress was afraid of these issues. Be it former Chief Minister Capt Amarinder Singh or now Charanjit Singh Channi, they had done nothing but mislead people for five years. On this occasion, Deputy Leader of Opposition Saravjit Kaur Manuke, MLAs Prof Baljinder Kaur, Rupinder Kaur Ruby, Kultar Singh Sandhwan, Meet Hayer, Principal Budh Ram, Kulwant Singh Pandori, Manjit Singh Bilaspur, Amarjit Singh Sandoa and Jai Singh Rodi were present.

Government also ran away from BAC meeting: Harpal Cheema
Leader of Opposition, Harpal Singh Cheema has accused the Congress government of running away from confronting the issues of the Opposition and the people. Talking to the media, a few minutes later after the adjourned session on Monday, Harpal Singh Cheema said that the Business Advisory Committee (BAC) was scheduled to meet after today’s session but the government canceled the meeting on the spot. Cheema said that today’s BAC meeting was necessary, because the meeting was supposed to discuss extending the session; but the government ran away from confrontation.
AAP proposes tribute to martyred farmers and laborers
While paying tributes in the House, Harpal Singh Cheema proposed to pay tributes to the 63 farmers and laborers who were martyred during the farmers’ agitation from September 3 (last session) to November 6. Meanwhile, deputy Leader of Opposition Saravjit Kaur Manuke and MLA Principal Budh Ram also proposed that the names of three farmers Amarjit Kaur, Sukhwinder Kaur and Gurmail Kaur of village Kheeva Dialuwala who lost their lives in a road accident at Tikri border be included in the tribute list.