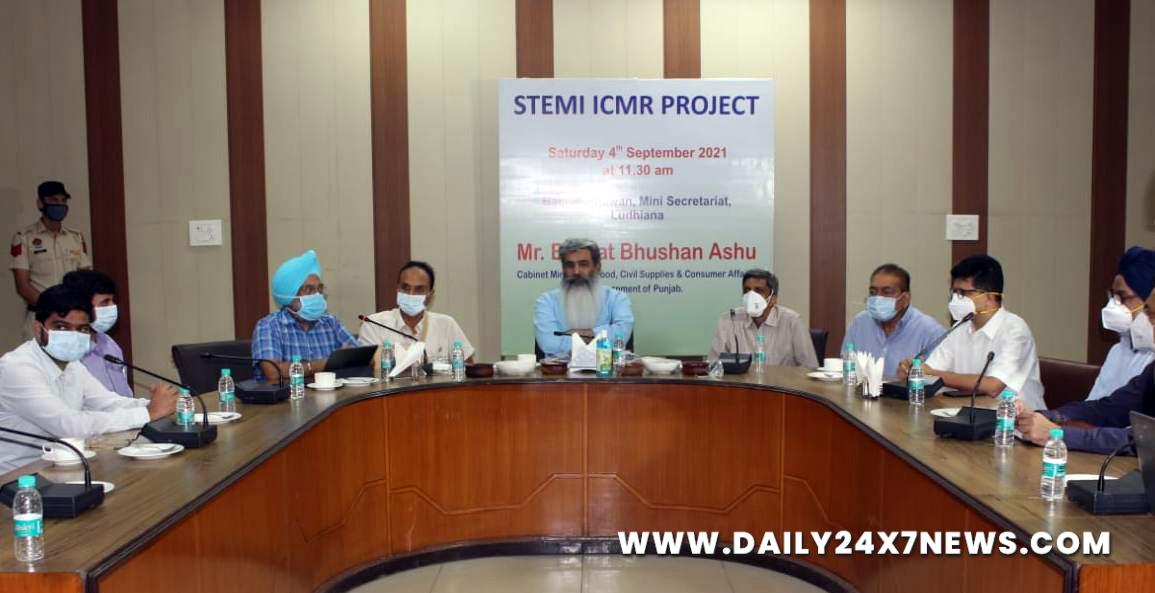 Ludhiana : Punjab Food, Civil supplies and Consumer Affairs Minister Bharat Bhushan Ashu on Saturday launched the Indian Council of Medical Research (ICMR) funded project of timely intervention for heart attack in Ludhiana which would save precious lives from the heart failure by initiating the treatment within golden hour (First 90 minutes) of the onset of symptoms.Accompanied by Deputy Commissioner Varinder Kumar Sharma, Director Health Services Punjab Dr GB Singh, Dr S Ramakrishna, Dr Bishav Mohan, Dr GS Wander, Prem Gupta and others, the Cabinet Minister termed the project a biggest service to the mankind under which clot buster drug Tenecteplase would be given free of cost to the patients at 11 centers. He thanked ICMR, DMCH and district administration for implementing the project in Ludhiana.Ashu told that everyone cannot afford to buy Tenecteplase drug being used to dissolve blood clots in the heart because of the high cost (around Rs 25000-Rs 30000). He stated that in 70% of the cases, this drug cannot be administered because of late arrival.

Deputy Commissioner Varinder Kumar Sharma directed the health department to sensitize the masses about the symptoms of the heart attack by visiting every nook and corner of Ludhiana through its ground level health workers as most of them are not aware bout the symptoms and ignore by considering it a gastrointestinal problem.
Sharma told that 11 centers include Civil Hospital, Krishna Hospital, Pahwa Hospital, RCH Pohir, Sarabha Hospital, SDH Jagraon, SDH Payal, SDH Samrala, Life Care Hospital and SDH Macchiwara have been set up in Ludhiana to provide the best possible treatment for the patients suffering from heart attack. He said that the doctors and paramedics of these hospitals have been trained at DMCH for last one-year.Dr Bishav Mohan from Dayanand Medical College & Hospital (DMCH) said that Coronary heart diseases, especially ST elevation Myocardial Infarction (STEMI or heart attack) are a leading cause of mortality globally and in India.He added that 95-percent lives can be saved from the heart attack if patient receives the treatment within three hours and 80-percent lives can be protected if the drug is being given within six hours.

‘Molnupiravir may be a game changer in fight against Covid-19’