Punjab Government And Its People Always Stood By Their Legitimate Rights 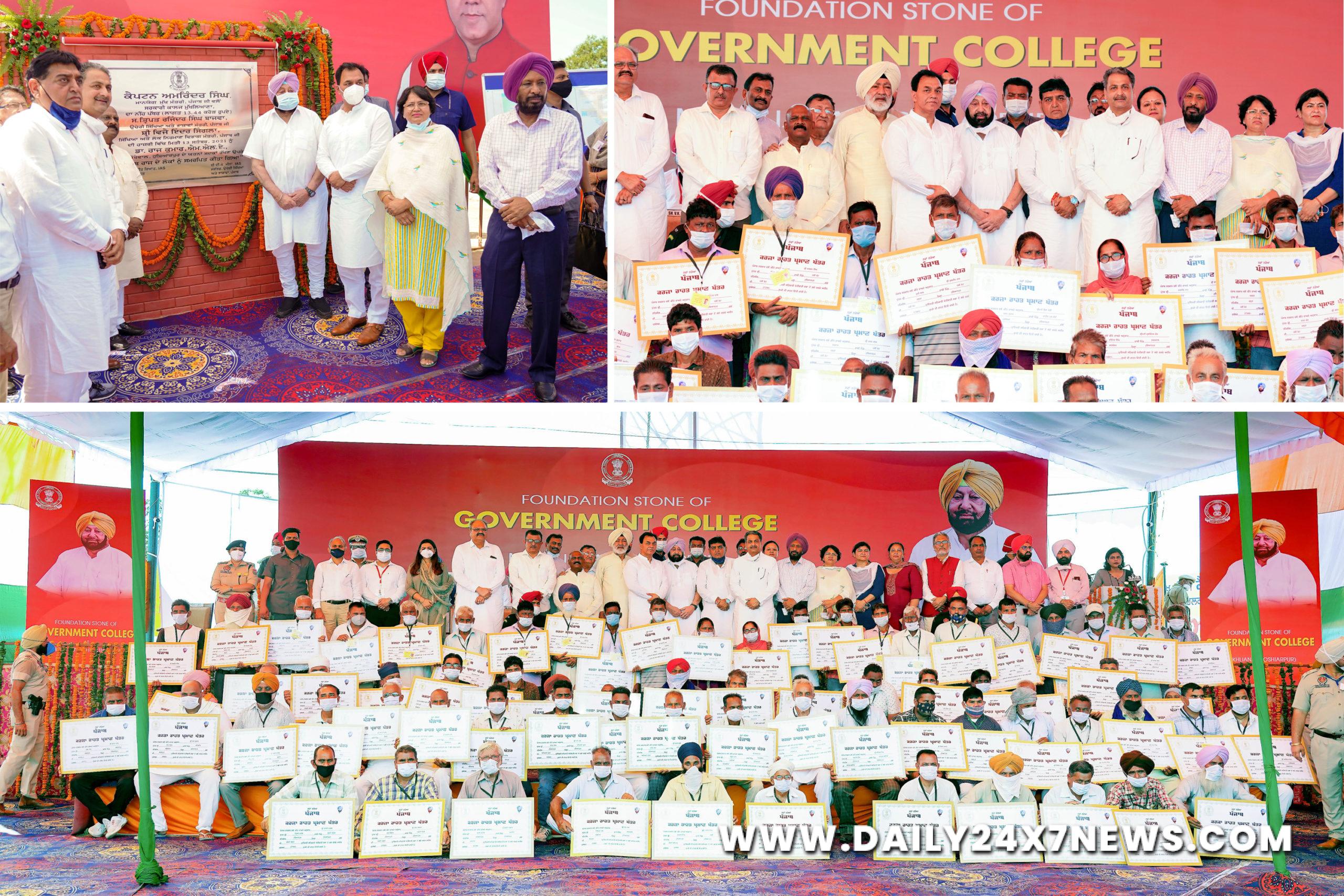 Hoshiarpur : Punjab Chief Minister Captain Amarinder Singh on Monday appealed to the representatives of various farmers’ unions not to hold protests across the state against the draconian farm laws passed by the Centre as the state government and its people have already expressed solidarity with them on this issue.In his address after laying the foundation stone of Government College at Village Mukhliana in Chabbewal Assembly Constituency at a cost of Rs. 13.44 crore, the Chief Minister without mincing any words, categorically said that the state where its entire people stood like a rock with them in favour of their legitimate issues, should desist from holding protests across the state against these black farm laws passed by the BJP led Central Government and thrusted upon them unilaterally even without taking into their confidence.Capt. Amarinder Singh said these ongoing protests at 113 places in Punjab by the farmers were not at all in the interests of the state, which has considerably impacted its economic development and hoped his request would be acceded by the farmers on agitation. He, however said that since these laws have already been rejected in the state assembly and replaced by the state government’s farm laws which were sent to Governor for his accent but to our dismay these have not yet been forwarded to the President of India.Anything within the purview of his government was done by us promptly, said Capt. Amarinder Singh adding a delegation of various leaders from these farmers unions met him recently at Chandigarh to get the price of sugarcane hiked from Rs. 325 to Rs. 360 per quintal and the same was accepted by me at once.Expressing concern over the inordinate delay in meting out farmers’ justified demands due to Centre’s apathy, the Chief Minister further said that instead of holding protest in the state, they should mount pressure on Union Government to get these anti farmer laws repealed.The Chief Minister also announced to name this upcoming Government College after the name of Dr. BR Ambedkar, the legendary Statesman and Architect of the Indian Constitution. Notably, as the building of the college will be ready by March, 2022, till then the College will start functioning from this academic session in its transit building at Senior Secondary School (Boys), Rajpura Bhaiyan.The Chief Minister also announced that the entire development works Sri Guru Ravidas ji Memorial at Sri Khuralgarh Sahib would be completed positively before the coming Parkash Utsav of Guru ji.The Chief Minister said that opening of this College would surely prove to be a milestone in the development of Kandi region.

He also assured that the State Government will leave no stone unturned for the economic development of this region. He also congratulated the Department of Higher Education on the establishment of this college besides especially thanked Dr. Raj Kumar Chabbewal, MLA from Chabbewal for his immense contribution to ensure holistic development in the region.The Chief Minster further mentioned that his Government has opened 17 more new colleges apart from this and the classes all of these 18 colleges will start from the current academic session. Captain Amarinder Singh said,” I am happy to share with you that we have fulfilled our commitment made in our manifesto, to have at least one degree College in each subdivision.” Pointing out further, the Chief Minister said that to ensure quality education in these 18 new colleges, the state government already sanctioned 160 teaching posts along with required posts of non teaching staff for these colleges. Each such college would be provided Rs. 2.00 crore as grant for infrastructure in this current year 2021-22.To cope up the shortage of teachers in the state colleges, Captain Amarinder Singh said that the Government has also given go ahead to fill 931 posts of Assistant Professors in Government Colleges and Punjab Public Service Commission (PPSC) has been asked to expedite the process of recruitment on the priority. He said that the state government has recently launched an online admission portal for all the Government Colleges, which is running successfully. Under this portal around fifty thousand students are benefitted. With this common admission portal, 100 per cent admissions would be contactless as applicants need not to be present themselves physically.Noting the availability, accessibility and affordability of the quality education has been one of the focused areas of his Government, the Chief Minister said that our government have also opened Jagat Guru Nanak Dev Punjab State University, Patiala; Maharaja Bhupinder Singh Sports University, Patiala as well as Sri Guru Tegh Bahadur State University of Law, Tarn Taran as the first law University of the State in the Government sector.Reiterating his Government’s commitment to ensure overall welfare of farmers, the Chief Minister said that a new umbrella programme “Kamyaab Kisan Khusaal Punjab (K3P) Mission” during 2021-22 launched with an aim of improvement in the income of those dependent on agriculture on a sustainable basis while preserving the ecological balance for future generations at a cost of Rs.3780 crore to be implemented during next three years (2021-24).

On the debt waiver, the Chief Minister said that the state government has waived the farm loans upto Rs.2 lakh, of 5.64 lakh farmers at a cost of Rs. 4624 crore thus fulfilling another major poll promise.On the occasion, the Chief Minister handed over the debt waiver certificates to 75 farm labourers and landless farmers as a symbolic launch of this scheme in Hoshiarpur district. It may be recalled that over 46000 such beneficiaries of this district would be covered under the debt waiver scheme to the tune of Rs. 140 crore.Speaking on the occasion, Education and PWD Minister Vijay Inder Singla assured that the entire Kandi region of Hoshiarpur district would be provided with the best infrastructure facilities so as to impart quality education in the government schools. He reiterated the firm commitment of School Education department to keep the number one position in the country in terms of performance and grading in school education intact for times to come.Earlier, MLA Dr. Raj Kumar Chabbewal in his welcome address said that the Congress party has captured the Chabbewal Assembly Constituency in 2017 after the gap of 45 years, which has made him far more accountable and responsive to cherish the aspirations of people of the region. Expressing gratitude to the Chief Minister, Dr. Raj Kumar said that these development projects coupled with several welfare schemes launched by state government like debt waiver, tripling the social security pension from Rs. 500 to Rs. 1500 per month and free bus travel facility to women etc. has reposed enormous trust and confidence in the state government policies and programs. He said the new college being set up in the rural belt would prove to be a boon for the youth to get quality and affordable higher education at their doorsteps. Dr. Raj Kumar also thanked the Village Panchayat of Mukhliana and especially its Sarpanch Amarjit Singh for showing magnanimity in offering 10 acres land for this college instead of requisite five acres as a ‘benevolent gesture’.Prominent amongst others present on the occasion included Industries and Commerce Minister Sunder Sham Arora, MLA and Acting President PPCC Sangat Singh Gilzian, MLAs Pawan Kumar Adia, Arun Dogra, Indu Bala and BS Dhaliwal. Apart from these, Mayor Surinder Kumar, Deputy Mayor Praveen Saini, former MLA Luv Kumar Goldy, District Congress President Kuldip Nanda, Nimisha Mehta besides Deputy Commissioner Apneet Riyait and SSP Amneet Kondal.