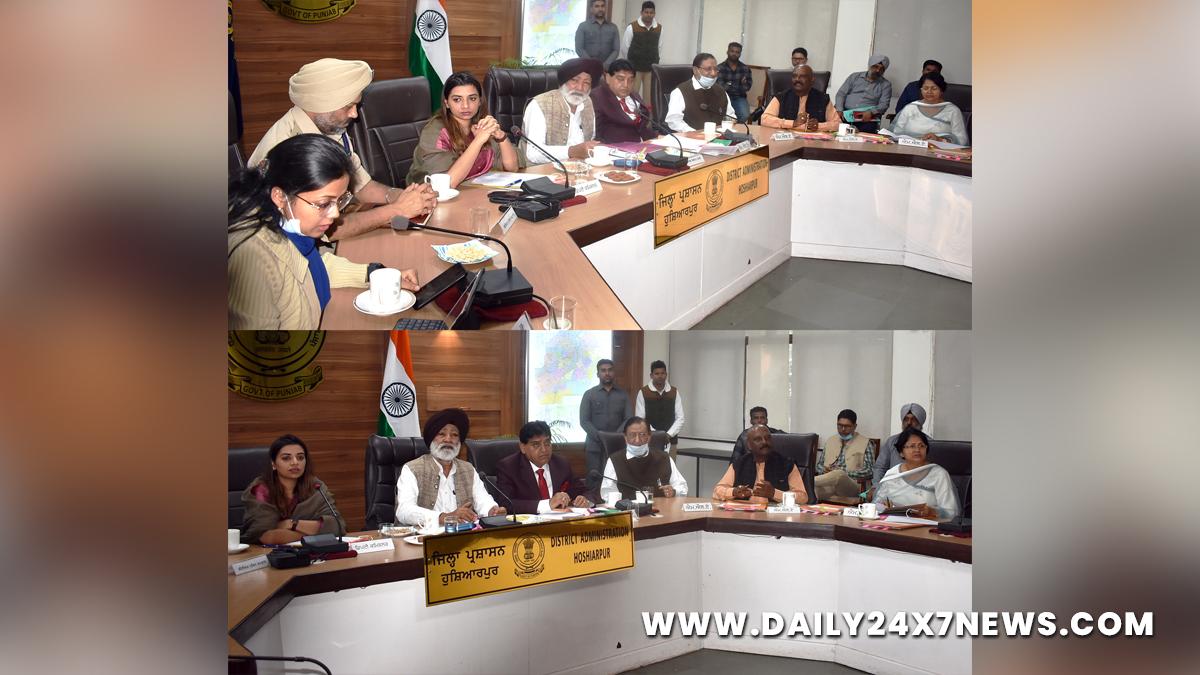 Hoshiarpur : Reviewing status of ongoing development projects, Forests and Labour Minister Sangat Singh Gilzian emphasised to ensure completion of these works within stipulated time frame so that people could be facilitated with the benefit of such projects. Chairing a meeting here at District Administrative Complex to take stock of development works and welfare schemes, the Cabinet Minister Punjab Government led by Chief Minister Charanjit Singh Channi had taken landmark decisions for the welfare of all sections of the society. He said that lakhs of people benefitted with the decision of per unit reduction in power tariff, waiving of arrears of electricity bills up to 2 KW, free power supply for rural water supply schemes and fixation of water charges of Rs 50 across state. He said petrol and diesel prices had also been slashed by Rs. 10 and Rs. 5 per litre, which would also provide a big succour to the people. He also directed the officers of different departments to get the pace of works expedited besides providing maximum benefit of welfare schemes to eligible beneficiaries.Accompanied by MLAs Sunder Sham Arora, Pawan Kumar Adia and Indu Bala, the Cabinet Minister also instructed to accelerate the proces of providing 5 marla plots to beneficiaries in villages by including all eligible ones in the ambit of welfare measure.

It was also informed that in Hoshiarpur district a total 52103 consumers would get benefit of more than Rs. 30.23 under waiver of arrears of electricity bills. So far, 9581 beneficiaries have got advantage of scheme with waiver of amount to the tune of over Rs 6.73 crore.Meanwhile, Deputy Commissioner Apneet Riyait apprised that under Punjab Nirman Program funds worth Rs 20 crore had been sanctioned of which Rs. six crore was released while the remaining 14 crore would also be disbursed shortly, which would further speed up the development works. It was also informed that under MGNREGA, a target of works worth Rs. 93.85 crore had been set and till date Rs 50.34 crore was incurred. Sangat Singh Gilzian also asked to ramp up process of Smart Ration Card, Sarbat Sehat Bima Yojana Cards and other welfare measure so that maximum people could take advantage of these schemes. MLAs Sunder Sham Arora, Pawan Kumar Adia and Indu Bala told officers to ensure effective supervision and timely review of these works in larger public interest. Prominent amongst those present in the meeting included ADC (Urban Development) Aashika Jain, SSP Kulwant Singj Heer, ADC (G) Sundeep Singh, ADC (D) Darbara Singh, District Congress Chief Dr. Kuldeep Nanda and officers of different departments. CAPTION: Forests and Labour Minister Sangat Singh Gilzian chairing a review meeting at DAC, Hoshiarpur on Wednesday. MLAs Sunder Sham Arora, Pawan Kumar Adia and Indu Bala were also seen.