The Aam Aadmi Party (AAP) MLAs on the third day of the budget session on Wednesday, marched from the MLA Hostel to Vidhan Sabha in protest against the continuous hike in electricity prices by Captain Amarinder Singh government in the state. The MLAs raised slogans 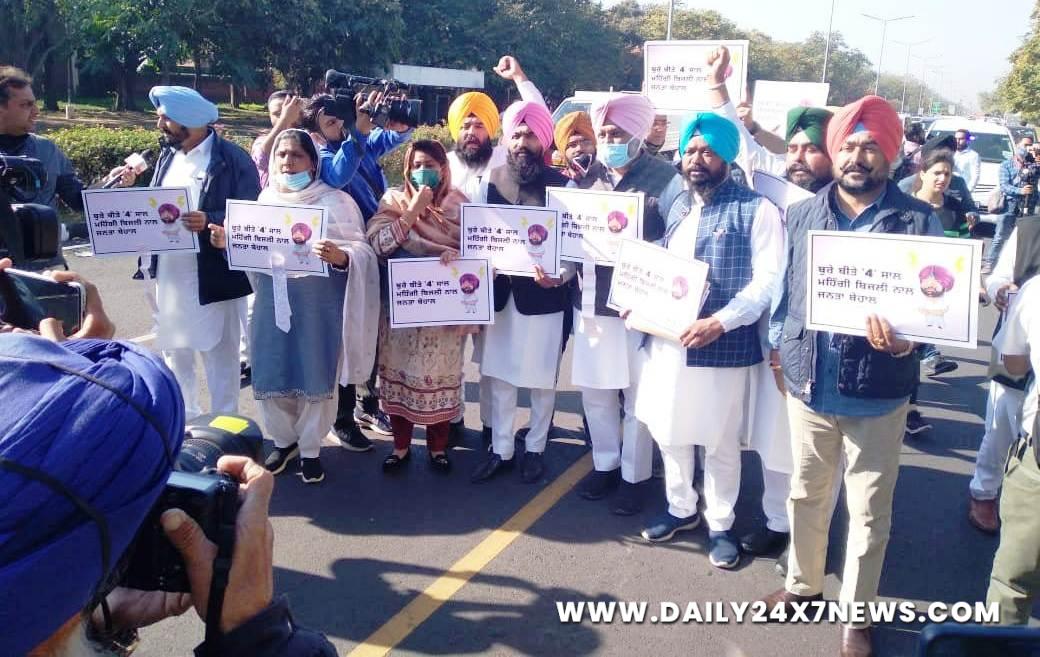 Chandigarh : The Aam Aadmi Party (AAP) MLAs on the third day of the budget session on Wednesday, marched from the MLA Hostel to Vidhan Sabha in protest against the continuous hike in electricity prices by Captain Amarinder Singh government in the state. The MLAs raised slogans against the Punjab government and accused Captain Amarinder Singh of reneging on his promises. Addressing the media on the occasion, senior leader of the party and Leader of Opposition (LoP) Harpal Singh Cheema and MLA Aman Arora, said that Captain Amarinder Singh had promised to reduce power tariffs before the 2017 elections and the same Captain had raised power prices 14 times during his four-year rule.Harpal Singh Cheema said that Captain Amarinder had stated in his manifesto before the elections that the agreements made by the SAD-BJP government with the private companies would be reviewed and cancelled. But it had been four years since Captain Amarinder Singh came to power, but reneging on his promise, he had not taken any step for it. “Captain Amarinder had said that white paper on power prices would be brought but he forgets about every promise. Today due to the policies of the Captain government, the people of Punjab were buying expensive electricity and in times of inflation the government was imposing more burden on the people,” he added.

Cheema said that on one hand Delhi’s Arvind Kejriwal government was providing free power to its people by purchasing power and on the other hand the Captain government of the state where power was being generated was providing power to the people at the most expensive rates. MLA Aman Arora said that he had submitted a bill in this regard in the ongoing assembly session, but the Speaker rejected it saying that it was not a fresh issue. He said that the Aam Aadmi Party had been trying to wake up the Captain government from its slumber for the last four years. Arora said that even the ministers and MLAs of the Congress government had spoken on this issue but Captain Amarinder Singh could not hear anything.He further said that during the SAD-BJP, the commission used to reach Sukhbir Badal but now Captain Amarinder Singh was taking his share. He alleged that Captain had given free hand to the companies to rob the people and fill their coffers and give his due share to him on time. “If the promises made by Captain Amarinder Singh during the elections had been fulfilled then there was no need for Captain to formulate any strategy for the Assembly elections in 2022,” he added.

‘Bhuj’ debutante Pranitha Subhash: Bollywood has space for everyone