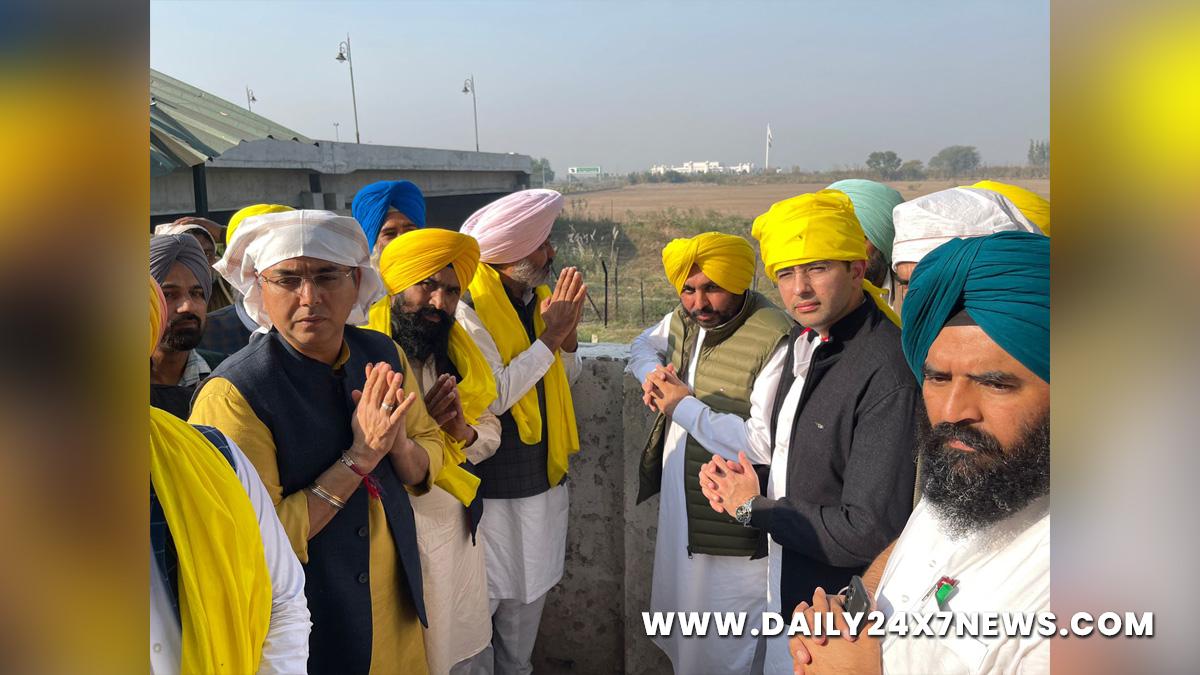 Dera Baba Nanak : Sri Guru Nanak Dev ji was the messenger of truth and peace, who gave the world a common message of ‘Akal Purakh’. These views were expressed by the Aam Aadmi Party (AAP) Punjab president and Member of Parliament Bhagwant Mann at Dera Baba Nanak on Friday. Along with Bhagwant Mann, AAP MLAs and other party leaders on the occasion of Guru Nanak’s birth anniversary paid obeisance to Darbar Sri Kartarpur Sahib from the India-Pakistan border near Dera Baba Nanak and prayed for the peace and prosperity of Punjab.It is worth mentioning that the AAP MP Bhagwant Mann, MLAs and other leaders were to visit Darbar Sri Kartarpur Sahib, Pakistan on the occasion of Sri Guru Nanak Dev’s birth anniversary and about 19 leaders of the party had also applied to visit Pakistan. But, the Modi-led central government did not allow the AAP leaders to visit Sri Kartarpur Sahib.

On this occasion, Bhagwant Mann said, “There is talk of open darshan of Sri Kartarpur Sahib, but the Aam Aadmi Party leaders were not allowed to pay obeisance. There should not be any politics on the issue of going to Kartarpur Sahib.” He said that only the Narendra Modi government knew the reasons for non-approval of the AAP leaders; they did not know anything. Whenever the Modi government allows the AAP leaders to visit Sri Kartarpur Sahib, the party leaders will definitely go to Darbar Sri Kartarpur Sahib.Bhagwant Mann further appealed to the central government to facilitate the process of obtaining permission to visit Sri Kartarpur Sahib and a fee of USD 20 per pilgrim should be paid by the central government. He said that the fee of 20 dollars is a heavy burden on a family as if five members of a family go to Sri Kartarpur Sahib; then the fee is around 100 dollars, which is about Rs 8,000 in Indian currency.Accompanying him on the occasion were Leader of Opposition in the Punjab Assembly, Harpal Singh Cheema, party’s Punjab affairs co-in-charge and MLA from Delhi, Raghav Chadha along with MLAs Kultar Singh Sandhwan, Aman Arora, Kulwant Singh Pandori, Meet Hayer, Manjit Singh Bilaspur and Jai Singh Rodi along with other leaders.

AAP’s election manifesto to include key demands of employees and pensioners : Harpal…

Agriculture Department continues its drive against…