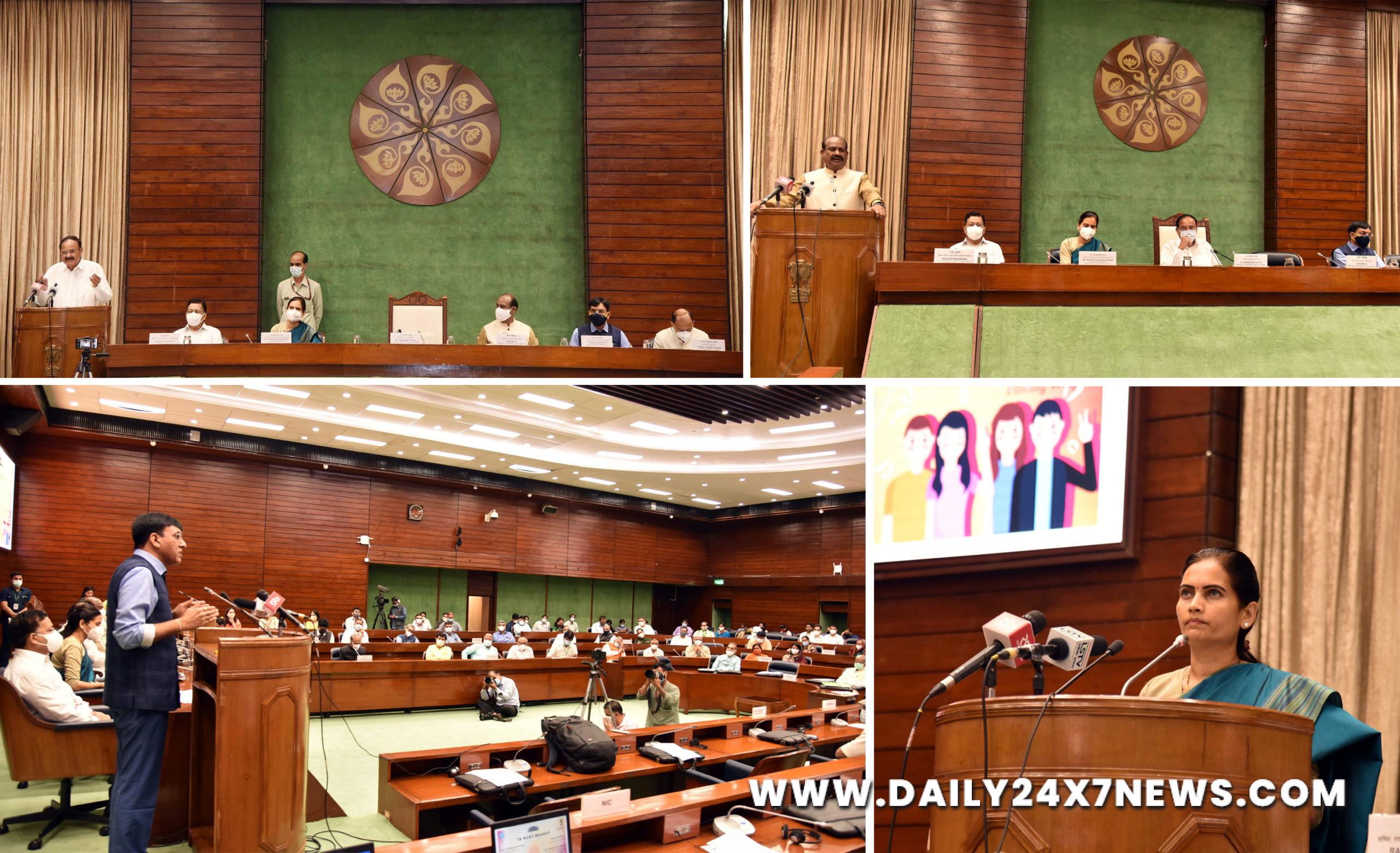 New Delhi : Vice President of India and Chairman of Rajya Sabha Venkaiah Naidu along with Speaker of Lok Sabha Shri Om Birla chaired an event today to sensitise Parliamentarians on the country’s efforts to eliminate TB. Shri Mansukh Mandaviya, Union Minister for Health and Family Welfare and Dr. Bharati Pravin Pawar, Union Minister of State for Health and Family Welfare apprised the audience on the situation of Tuberculosis in the country and explained the need to rapidly eliminate the disease by 2025, as has been envisioned by Prime Minister Shri Narendra Modi in 2018.Thanking the parliamentarians for being present at this sensitization exercise, the Vice President stated that “coordination at the central, state, district and local levels would help in making this a people’s movement and would expedite our efforts in eliminating TB by 2025.” Significant progress has been achieved since independence on this front and several others due to increasing penetration of healthcare systems across the country. For e.g. 63 million lives have been saved since 2000 through TB diagnosis and treatments, he added. He urged the members to set a goal in their constituencies for proper planning and execution of govt programs and help in eliminating TB. A pledge was taken by Parliamentarians for a TB Mukt Bharat.Lok Sabha Speaker Shri Om Birla, calling for a collective action against TB, emphasized the crucial role played by the Parliament in disseminating the message in a country full of diversity. He said that it is responsibility of the people’s representatives to ensure that their constituencies have constant identification and monitoring of the TB patients, look after the needs of patients during and post treatment. For smooth governance and health administration, parliamentarians would be provided with all necessary data related to TB and any assistance needed from the government, he added.

In his address, Shri Mansukh Mandaviya noted, “Prime Minister Shri Narendra Modi ji played a huge role in moulding thinking of the country towards making health a ‘comprehensive’ subject by linking it with development.” Giving examples of programmes targeting malnutrition and those aimed at promoting cleanliness run by line ministries, he said that all these programmes ultimately improve the social determinants of health thereby improving the living standards of India’s population. He exemplified the model in the country’s efforts to eliminate TB which requires nutritional support and wide social awareness. He highlighted the increased budgetary provisions that aim to provide holistic health to India’s citizens.The Union Health Minister underscored that a staggering 65% of TB cases are in the age group 15-45 which is the most economically productive population segment. This coupled with the fact that 58% of TB cases are in rural areas translates to entire families being excluded from upward mobility due to Tuberculosis. He thus asked all the MPS to proactively engage in sensitizing citizens about Tuberculosis and its treatment in the events they organise and attend.Dr. Bharati Pawar spoke on the difficulties in the journey towards TB elimination with the onset of COVID-19: “Globally, 2020 witnessed a sweeping COVID-19 pandemic devastate lives, economies, health systems and health programmes across the world with record-breaking speed. In just a few months, the pandemic has reversed years of progress made in the fight against Tuberculosis. The onset of the pandemic in March 2020 triggered lockdowns, restrictions in movement, repurposing of available health system resources, infrastructure, diagnostics, treatment centers and manpower to fight Covid-19, disrupted ongoing TB elimination efforts and services all over the country.” She informed her colleagues in Parliament on the steps being taken by the Ministry to rapidly make up for this interruption in the elimination of TB. She also suggested the effective sharing of collective responsibility with States in tackling the social determinants of TB for better and rapid health outcomes.Union Health Secretary Shri Rajesh Bhushan, Shri Utpal Kumar Singh, Secretary General, Lok Sabha and Ms. Arti Ahuja, Additional Secretary (Health) were also present.