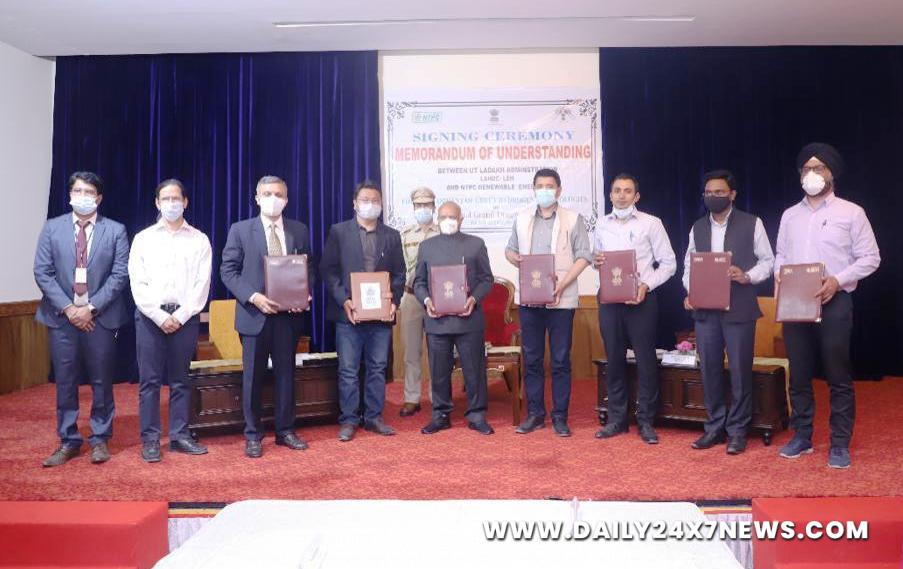 New Delhi : Union Cabinet Minister for Power and New and Renewable Energy, R.K . Singh congratulated NTPC , Maharatna PSU under Ministry of Power for signing a MoU with UT of Ladakh and LAHDC to setup the country’s first Green Hydrogen Mobility project, strengthening PM Shri Narendra Modi’s vision to ensure a carbon free economy based on renewable sources and green hydrogen.He said that it is a matter of pride for all of us that Leh is soon to become India ‘s first city to implement a green hydrogen based mobility project with zero emission.REL, a 100% subsidiary of NTPC, signed a MoU with Union Territory of Ladakh, today, to set up the country’s first green Hydrogen Mobility project in the region. The signing of the MoU was also marked with the inauguration of NTPC’s first solar installations in Leh in form of solar trees and a solar car port.The MoU was signed in the august presence of Lt. Governer Shri R.K . Mathur, senior dignitaries of government, NTPC and public representatives. The MoU will enable NTPC to help Ladakh develop a carbon free economy based on renewable sources and green hydrogen. This is also in line with the Prime Minister’s vision of a ‘carbon neutral’ Ladakh. LG mentioned that he would like Ladakh to become a hydrogen state and is happy to partner with NTPC to achieve this long term goal.NTPC has planned to ply 5 hydrogen buses, to start with, in the region and the company will be setting up a solar plant and a green hydrogen generation unit in Leh towards this end. This will put Leh as the first city in the country to implement a green hydrogen based mobility project. This would be zero emission mobility in true sense.NTPC has been aggressively pushing for greening its portfolio and green hydrogen project is another step towards achieving low carbon footprint. NTPC has also been promoting usage of green hydrogen based solutions in sectors like mobility, energy, chemical, fertilizer, steel etc.NTPC has recently revised its target of achieving 60GW renewables capacity by 2032, almost doubling the earlier target. Recently, NTPC has commissioned India’s largest floating solar project of 10MW at Vishakhapatnam.