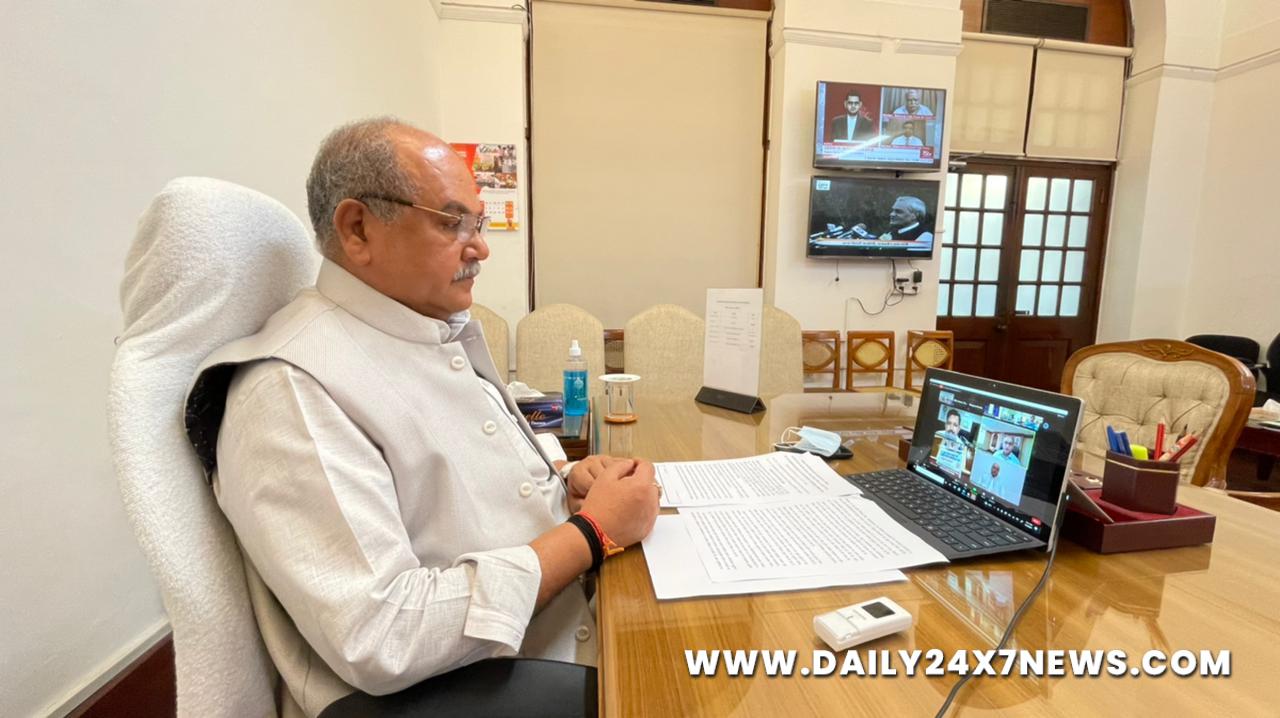 New Delhi : Union Minister for Agriculture and Farmers Welfare Narendra Singh Tomar virtually inaugurated the 28th Regional Workshop of Krishi Vigyan Kendras (KVKs) located in Madhya Pradesh on Monday. On the occasion, Shri Tomar said that under the able leadership of Prime Minister Shri Narendra Modi, the Government of India is working on priority for the progress of farmers in the villages. To develop village infrastructure across the country, a total package of more than 1.5 lakh crore rupees has been started under Aatma Nirbhar Bharat Abhiyaan, including an agricultural infrastructure fund of one lakh crore rupees. Similarly, Concrete steps like the scheme of formation of 10 thousand new FPOs with the outlay of Rs.6,850 crore and the new agricultural reforms for the empowerment of farmers has been introduced. The Minister said the new reforms will bring prosperity to agriculture and will prove to be a milestone in agricultural development. It will strengthen about 86 per cent small-medium farmers of the country.Praising the efforts of Krishi Vigyan Kendras in the times of Corona crisis, the Minister said with the help of Information-Communication Techniques scientists are benefitting the farmers through proper techniques. He said KVKs are working with full zeal for achieving the target of doubling the farmers’ income. At present 723 KVKs are being run by ICAR units, NGOs and State Agricultural Universities. Out of which 7 are in Naxal-affected areas. He congratulated all the scientists and other staff for the smooth functioning of KVKs amid all the challenges in the area.Shri Tomar said that mainly pulses, wheat and soybean from Madhya Pradesh and paddy from Chhattisgarh have a significant contribution to the total production of the country. It is a matter of satisfaction that the productivity of pulses is being increased through KVKs cluster front line demonstration and seed hub.

Out of 60 lakh hectares of the soybean crop in the state, productivity is being increased by using raised bed technology in about 35 lakh hectares along with water conservation. Due to the efforts of KVKs, Kadaknath poultry farming is being done in 25 states and increasing demand abroad. Shri Tomar said to make these centers more useful and modern, important units like integrated farming systems, advanced seed production and processing, water harvesting and micro-irrigation have been established. He urged for cooperation from the state governments in this matter that will further benefit the agriculture sector.He said KVKs distribute soil health cards to the farmers and advise them for nutrients requirements according to the crops through demonstration and training. The Minister said that it is also a matter of happiness that a new project- ‘Arya’, being operated in Attari, Jabalpur in 12 KVKs of Madhya Pradesh-Chhattisgarh, is attracting youth towards farming. Under the project, more than 700 youth have set up enterprises in nursery management, processing and mushroom production etc. The ‘Farmer First’ project in Attari, Jabalpur is being run by three institutes and four universities. ‘Mera Gaon-Mera Gaurav’ program is also being run by 5 universities and 5 other institutes of Madhya Pradesh-Chhattisgarh. To increase the availability of seeds of pulse crops, the Seed Hub program is being operated by KVK in 15 districts.Shri Tomar said that KVKs play an important role in discharging the responsibility of women empowerment by promoting nutrition-sensitive agriculture through the ‘Nari’ program, development of agriculture and entrepreneurship in tribal-dominated areas through ‘Kshamata’ program, value addition of employment-oriented regional products through ‘Vatika’ program. The Minister said as Digital Literacy, Marketing and Artificial Intelligence, Mechanization Learning is the need of the day, Krishi Vigyan Kendras will be strengthened and modernized in this direction. Considering the importance of organic farming, special training is also being organized by KVKs on organic traditional farming, which will help the farmers to adopt organic farming.On this occasion, Union Minister Shri Tomar released various publications and laid the foundation stone of Soyabean Seed Hub Store at KVK, Govind Nagar, Hoshangabad.

Covid has still got a ‘long, long way’ to go: WHO Special Envoy