You are lucky to enter Service in the 75th Year of Azadi, next 25 years are critical for both you and India: PM 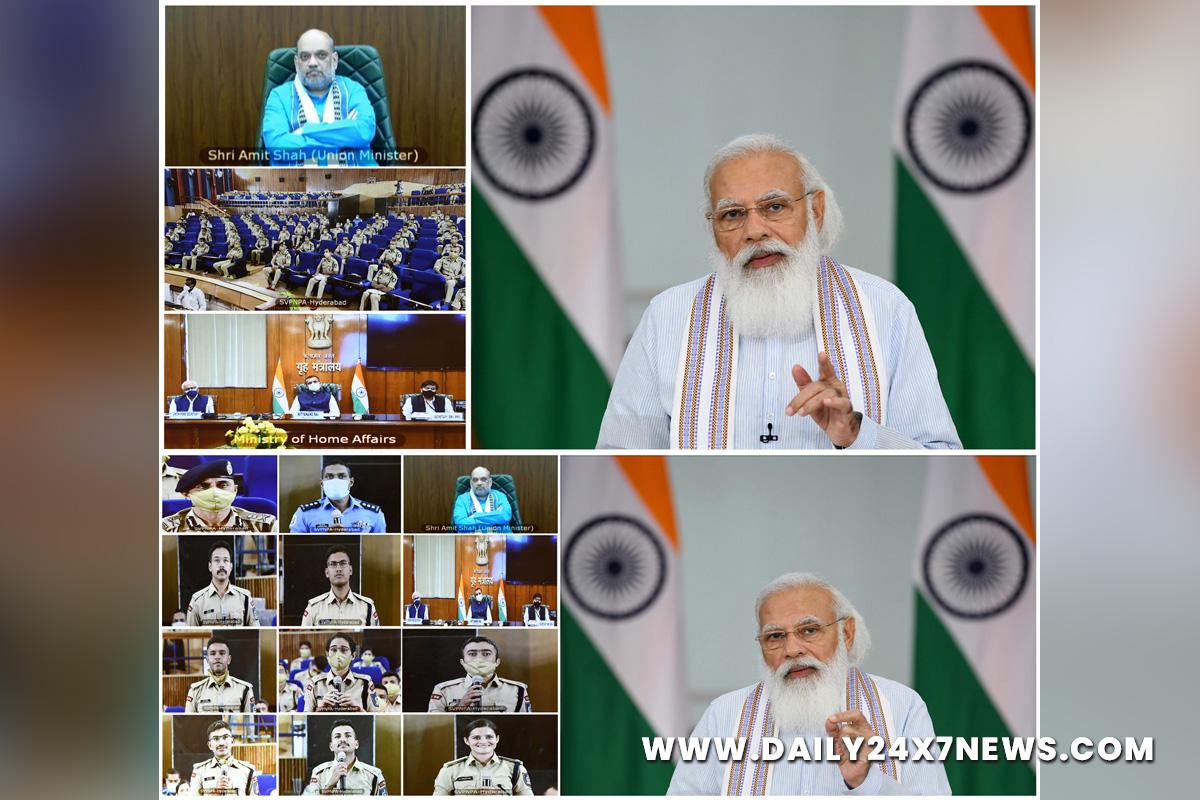 The Prime Minister had a lively interaction with the Probationers of Indian Police Service. The interaction with the Officer Trainees had an spontaneous air and the Prime Minister went beyond the official aspects of the Service to discuss the aspirations and dreams of the new generation of police officers.With Anuj Paliwal, IIT Roorkee pass out from Haryana who has been allotted Kerala Cadre, the Prime Minister talked of seemingly contradictory but entirely useful choices of the officer. The officer told the Prime Minister about the utility of his Bio-technology background in crime investigation and his optional subject in Civil Services exam , Sociology, in the dealing with the aspects of his chosen career. The Prime Minister said that Shri Paliwal’s hobby for music might look out of place in the dry world of policing but it is going to help him and make him a better officer and will help him improving the Service.With Rohan Jagdish, a law graduate with Political Science and International relations as his Civil Services subject and a keen swimmer, the Prime Minister discussed the importance of fitness in the Police Service. He also discussed the changes in training over the years as Shri Jagdish’s father was state service officer from Karnataka where he is going as IPS officer.With Gaurav Rampravesh Rai a civil engineer from Maharashtra who has been allotted Chattisgarh Cadre, the Prime Minister dwelled in his hobby of chess and discussed how the game will help him in strategizing in the field. In the context of left-wing extremism in the region, the Prime Minister said that the area has unique challenges and will need, along with law and order, an emphasis on development and social connect in the tribal areas. The Prime Minister said young officers like him will contribute immensely in weening away the youth from the path of violence.

The Prime Minister said that we are containing the Maoist violence and new bridges of development and trust are being established in the tribal areas.With Ranjeeta Sharma, Rajasthan Cadre officer from Haryana, the Prime Minister talked about her achievements during the training where she is accorded the honour of the best probationer and talked about the use of her qualification in mass communication in her work. Shri Modi noted the work done in Haryana and Rajasthan to improve the conditions of daughters. He advised the officer to give one hour every week to girls of her place of posting by interacting and motivating them to achieve their full potential.To Nithinraj P, from Kerala who has been allotted his home cadre, the Prime Minister advised to keep his interest in photography and teaching alive as they are good medium to connect with people also.The Prime Minister told Doctor Navjot Simi a dental doctor from Punjab, allotted Bihar Cadre that presence of woman officers in the force will bring positive change in the service and quoted Guru to advise the officer to do her duty with compassion and sensitivity without any fear. He said that inclusion of more daughters in the service will strengthen it.Kommi Pratap Shivkishore from Andhra Pradesh allotted his home cadre is M Tech from IIT Khadagpur. The Prime Minister discussed his ideas about tackling financial frauds. The Prime Minister stressed the inclusive potential of information technology. He asked them to keep pace with the developments in the world of cybercrime. He also asked the young officers to send their suggestion for improving digital awareness.Shri Modi also interacted with Mohammad Nazim an Officer Trainee from Maldives. The Prime Minister conveyed his appreciation for the nature loving people of Maldives. He said Maldives is not just neighbor but a good friend also. India is assisting in establishing a Police Academy there. The Prime Minister touched upon the social and business ties between the two countries.
The Prime Minister’s Address
Speaking on the occasion, the Prime Minister noted that coming 15th August will herald 75th anniversary of Independence. Last 75 years have seen efforts to build a better Police Service. In recent years, significant improvement has taken place in the infrastructure related to police training. The Prime Minister exhorted the officer trainees to remember the spirit of the freedom struggle. He said the period between 1930 to 1947 saw the younger generation of our country rise in unison to achieve a great goal. He said that same feeling is expected in the youth of today, “They fought for ‘Swarajya’; you have to move forward for ‘Su rajya’”, the Prime Minister stressed.The Prime Minister asked the officer trainees to remember the significance of the time they are entering their career when India is undergoing transformation at every level. As their first 25 years in the service are going to be critical 25 years in the life of the country when Indian republic will move from 75 years of independence to the century of its independence.The Prime Minister emphasized the need to keep police ready in these times of technological disruptions. He said the challenge is to prevent new types of crime with even more innovative methods. He stressed the need to undertake novel experiments, research and methods for cyber security.Shri Modi told the probationers that people expect a certain degree of conduct from them. He asked them to be always mindful of the dignity of their Service not only in office or headquarters but beyond that too. “Your will have to be aware of all the roles in the society, your need to remain friendly and keep the honour of the uniform supreme” said the Prime Minister.
The Prime Minister reminded the officer trainees that they are flag-bearers of ‘Ek Bharat -Shreshth Bharat’, therefore they should always keep the mantra of ‘Nation First, Always First’ foremost in their mind and it should reflect in all their activities. In their decisions art field level they should keep national interest and national perspective in mind, said the Prime Minister. Shri Modi acknowledged the bright young women officers of the new generation and said that there have been efforts to increase the participation of women in the force. He expressed the hope that our daughters will infuse the police service with the highest standards of efficiency, accountability and will also bring in elements of politeness, ease and sensitivity. He also mentioned that the states are working on introducing Commissioner System in the cities with more that 10 lakh population. The system has already been introduced in many cities of 16 states. He said it is important to work collectively and sensitively to make policing effective and futuristic.The Prime Minister paid homage to the members of the police force who lost their life while serving during the pandemic. He recalled their contribution in in the fight against the pandemic.The Prime Minister said that police officers from neighbouring countries, undergoing training at the academy underline the closeness and deep relation of the countries. He said that whether it is Bhutan, Nepal, Maldives or Mauritius, we are not just neighbours but we also share lot of similarities in our thinking and social fabric. We are friends in times of need and whenever there is any calamity or difficulty we are the first responders for each other. This was evident during the Corona period also.