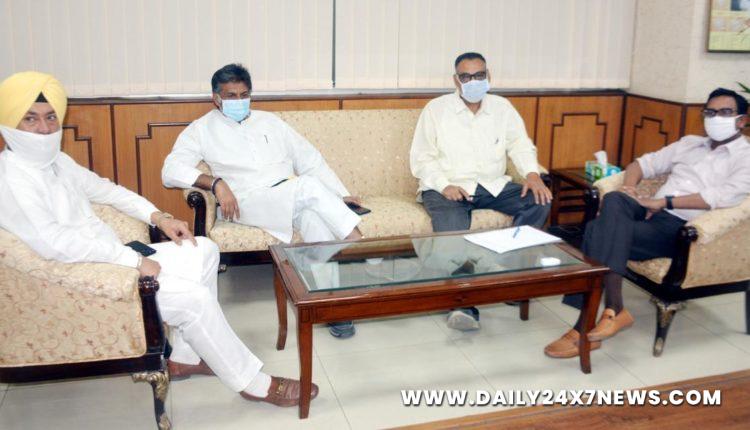 S.A.S. Nagar : Advocating exemplary action against erring builders, Member Parliament Manish Tewari asked the GAMADA officials to take the most stringent action in the book against builders/developers who take gullible citizens on a ride.“Due to deliberate excessive delays in possession and deficiencies in provision of basic amenities, real estate customers suffer not only from mental and financial injury but also from brazen violation of their right to life and livelihood,” said Tewari. He suggested hefty penalties, cancelation of licenses and criminal action against builders/colonizers indulging in malpractices.He also suggested the officials to come up with a “Model Builder Buyer Agreement” with an appropriate insertion of a penalty clause. “Generally the agreements are craftily drafted in favour of builders, leaving people in the lurch,” said Tewari.Today the real estate industry is one most flourishing industries in the country. The demand for residential and commercial property is increasing constantly and so is the number of builders and developers who offer special features to attract prospective buyers.
But, in many cases the promises made are not fulfilled. A lot of complaints are received against the promoters/builders regarding failure to complete the project within the stipulated period and also regarding non-provision of basic amenities such as power, water supply etc. Deficiency in service, improper amenities, ceiling leakage, improper drainage system, incomplete fire safety system, low quality of electrical wiring, improper water provisions, not providing the occupation certificate etc. are some of the major areas of conflict between the developers and the buyers that need to be redressed, said MP.He appreciated District Administration’s move of constituting Special Committee to redress public grievances against the builders and added that to reduce the financial loss and mental agony of the buyers and to curtail unfair practices of builders and real estate developers, GAMADA must also pro-actively come up with appropriate measures.Manish Tewari held a meeting to familiarize with the gamut of activities that GAMADA undertakes and interacted with the officials at PUDA Bhawan, Mohali. He was accompanied by Raminder Pal Singh Palli, Chairman, Punjab Agri Export Corporation and Pawan Dewan, Chairman Punjab Large Industrial Development Board.