Calls upon FICCI-FLO to promote women entrepreneurship in Bamboo industry 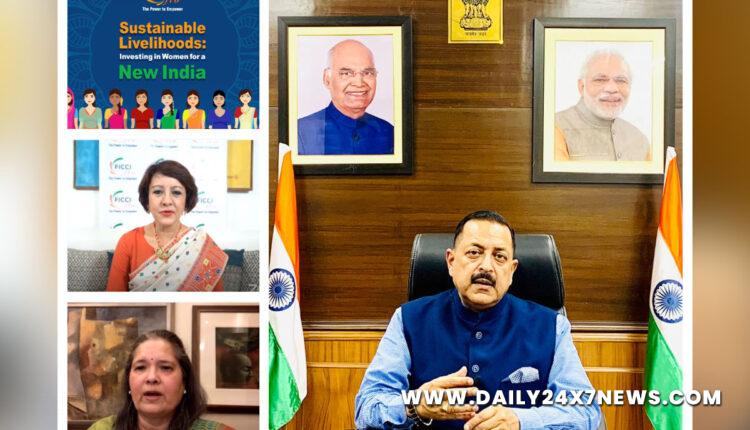 New Delhi : Union Minister of State (Independent Charge) Development of North Eastern Region (DoNER), MoS PMO, Personnel, Public Grievances, Pensions, Atomic Energy and Space, Dr. Jitendra Singh said here today that New Northeast is destined to play a leading role in New India.Speaking on ‘Sustainable Livelihoods: Investing in Women for a New India” at the 37th Annual Session organised online by Federation of Indian Chambers of Commerce & Industry (FICCI)-FLO here Dr. Jitendra Singh said, Northeast has had a rich tradition of women entrepreneurship and always took a lead as far as the women Self Help Groups (SHGs) are concerned. He recalled that it was way back in 1950s, only a few years after India’s independence, that the State of Assam had its first ever Mahila Mandal established, which actually paved the way for other States to follow. Today, different North Eastern States have several vibrant women groups like the ‘Naga Mother Association’, which are contributing to the cause of livelihood as well as economic empowerment.
The North Eastern Region, said Dr. Jitendra Singh, has been traditionally known for highly emancipated women society and the women folk there are not only enterprising but at the same time also innovative and visionary in their approach. He said, the region is a home for knitting, weaving & handicrafts and the most distinct example of this came forth during the early weeks of COVID pandemic when there was a demand for face-masks from all parts of the country except the North Eastern region because the women Self Help Groups could readily make available face-masks not only in sufficient numbers and quantity but also in varied and fanciful designs to match with the attire worn.The Modi government, said Dr. Jitendra Singh, is giving special impetus to entrepreneurship in Northeast and a big headway has been sought to be made in the area of bamboo trade and commerce. He called upon women organisations like FICCI-FLO to come forward and contribute to promote women entrepreneurship in Bamboo industry. He said, with Prime Minister Narendra Modi’s personal intervention, the 100 years old Indian Forest Act had been amended to exempt the home grown Bamboo from it and Import Duty on Bamboo products has been hiked in order to promote domestic bamboo products. Dr. Jitendra Singh said, Prime Minister Modi described Northeast as the New Engine of India. In the post-COVID era, he said, the unexplored resource potential of Northeast is going to play a crucial role in the country’s economy. He expressed confidence that just as Northeast today has emerged as a role model for the rest of India, Northeast women are going to be a role model for their women counterparts in other parts of India.