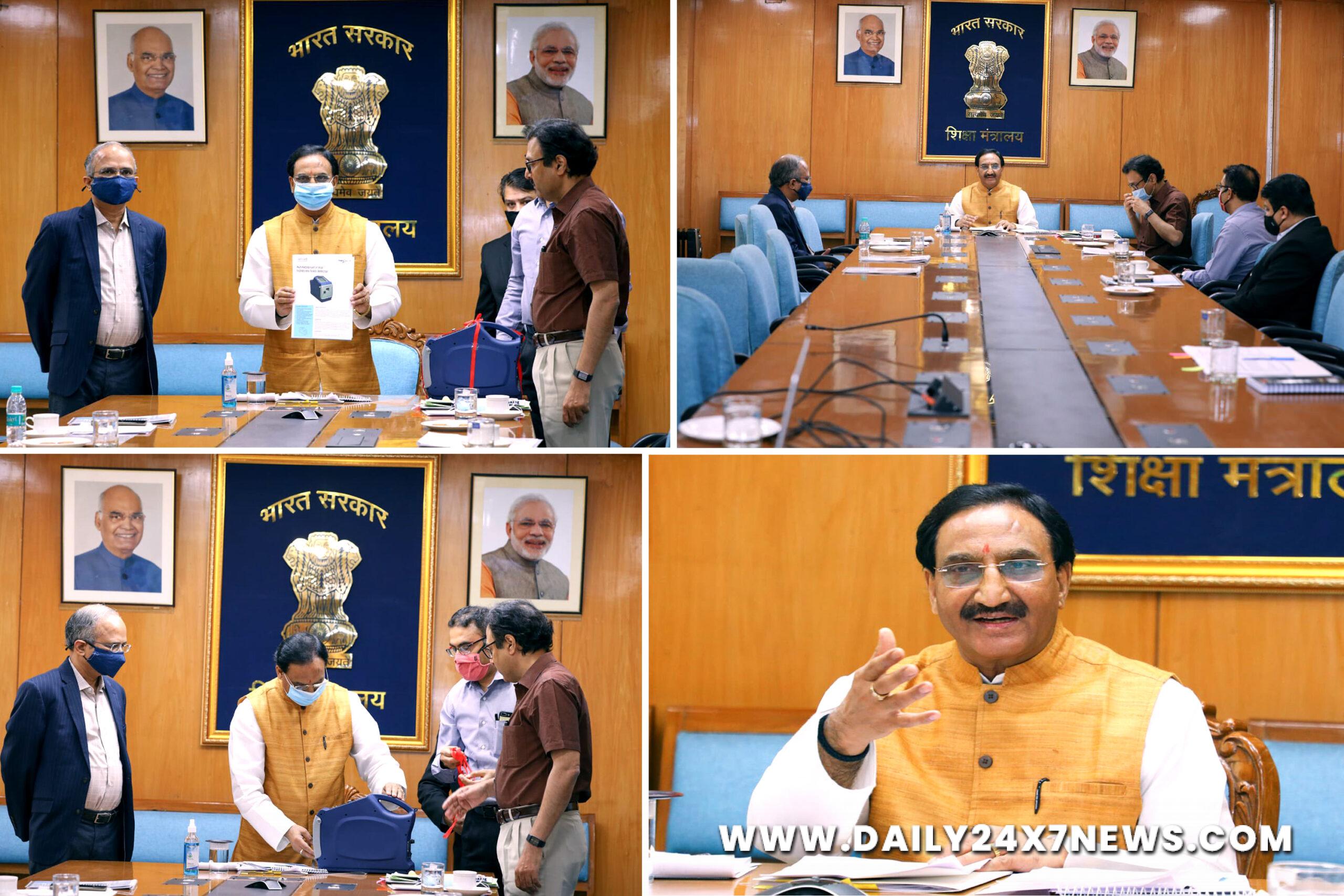 New Delhi : Union Education Minister, Ramesh Pokhriyal ‘Nishank’ today launched NanoSniffer, the world’s first Microsensor based Explosive Trace Detector (ETD) developed by NanoSniff Technologies, an IIT Bombay incubated startup. Director, IIT Delhi, Shri V. Ramgopal Rao, and senior officials of the Ministry were present on the occasion.NanoSniffer has been marketed by Vehant Technologies, a spin-off from a former IIT Delhi incubated startup Kritikal Solutions.Speaking on the occasion, Shri Pokhriyal said that NanoSniffer, developed by NanoSniff Technologies, is a step towards Prime Minister Shri Narendra Modi’s vision of a self-reliant India. NanoSniffer is a 100% Made in India product in terms of research, development & manufacturing. The core technology of NanoSniffer is protected by patents in the U.S. & Europe. The Minister further said that this affordable device will reduce our dependency on imported explosive trace detector devices. It will also encourage other institutions, startups and medium-scale industries to research & develop products indigenously. It’s a perfect example of lab to market product, he added.The Minister appreciated that this home-grown Explosive trace detector device (ETD) – NanoSniffer can detect explosives in less than 10 seconds and it also identifies and categorizes explosives into different classes. It detects all classes of military, conventional and homemade explosives. NanoSniffer gives visible & audible alerts with sunlight-readable color display, he added.
Union Education Minister said that with the development of this product, IIT Bombay and IIT Delhi along with their offshoot companies are making a sincere effort to boost the nation’s security with advanced and affordable indigenous products. It’s a perfect example of academia and industry collaboration, which will set an example for other startups in India. Our nation is full of talented, knowledgeable and hard-working entrepreneurs, hence why should we import foreign products. It is amazing that now our country is developing & manufacturing products like NanoSniffer, Explosive Trace Detectors, he added. Given the constant threats, which our nation faces due to geo-political realities, explosives & contraband detection has become a norm at high security locations like airports, railways & Metro stations, hotels, malls, and other public places. Check points at such locations are incorporating advanced detection equipment for rapid scanning of people and baggage. Almost all these products for explosive detection are imported at a high cost leading to the loss of valuable foreign exchange by the country. NanoSniffer is a perfect substitute for such products.NanoSniff Technologies has partnered with Vehant Technologies, a pioneer in Artificial Intelligence/Machine Learning- based Physical Security, Surveillance and Traffic Monitoring & Junction Enforcement Solutions.NanoSniffer provides trace detection of nano-gram quantity of explosives & delivers result in seconds. It can accurately detect a wide range of military, commercial and homemade explosives threats. Further analysis of the algorithms also helps in categorization of explosives into the appropriate class. With local manufacturing, including its MEMS sensor, it will save a lot of import cost for the country.NanoSniffer has successfully passed Pune based DRDO’s High Energy Materials Research Laboratory (HEMRL) testing and has also been tested by the country’s elite counter-terror force National Security Guard (NSG).