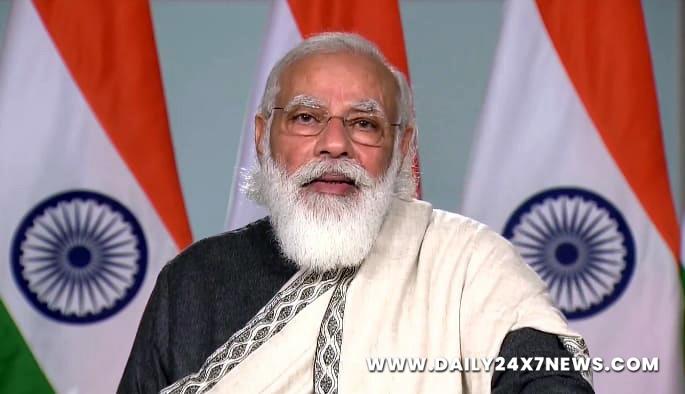 New Delhi : In his fresh call to make India ‘Aatmanirbhar’ (self-reliant) in the defence sector, Prime Minister Narendra Modi on Monday invited private sectors to come forward in manufacturing as well as in the design and development of defence items to spread the country’s glory worldwide.Speaking at a webinar for effective implementation of Union Budget provisions in the defence sector, the Prime Minister said a part of the money has also been reserved for domestic procurement in the defence capital budget.”I would urge the private sector to come forward in manufacturing as well as in design and development, waving India’s glory worldwide,” the Prime Minister said.The Prime Minister said the defence corridors being currently built in the country will also “help local entrepreneurs for local manufacturing”.Modi further gave a call for “Aatmanirbharata” (self-reliance) in the defence sector and urged to focus on empowerment of both ‘Jawan Bhi’ and ‘Naujawan Bhi” fronts.Noting that the Micro, Small and Medium Enterprises (MSMEs) are like the “backbone for the entire manufacturing sector”, the Prime Minister said the reforms being done by the government for giving more freedom to MSMEs to encourage them for their expansion.The Prime Minister said that India has made a list of 100 important items related to defence and these can be manufactured only with the help of the country’s local industry.
For this, Modi said the government has fixed a timeline so that our industry can plan to achieve the capability to meet these needs.”It is a negative list in the official language but in the language of self-reliance it is a positive list. This is the positive list on the strength of which our own manufacturing capacity is going to increase. This is the positive list that will do job creation in India itself,” Modi said.”This is the positive list which is going to reduce our dependence on foreign countries for our defence needs. This is the positive list, because of which products made in India are guaranteed to be sold in India.”Mentioning that the country used to have hundreds of ordnance factories before Independence and that large-scale weapons were sent from India in both world wars, the Prime Minister said how this system was not strengthened after independence.”Our government relied on the capabilities of its engineers-scientists and Tejas and today Tejas is gracefully flying in the sky. A few weeks ago, an order of Rs 48,000 crore was placed for Tejas,” Modi said.The Prime Minister said the ruling Central government’s endeavour has been to maintain transparency and predictability with ease of doing business since 2014, and that “we are moving forward in this (defence) sector.”We have taken one step after another in this (defence) sector with de-licensing, de-regulation, export promotion, foreign investment liberalization.”